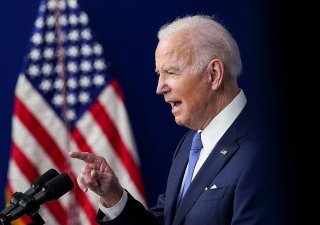 Just how liberal is Joe Biden? In his latest speech in Atlanta, he seized upon the putative authoritarianism of his detractors to accuse around half of his countrymen as enemies of progress. But it is Biden who, in the name of battling authoritarianism, is actually promoting it.

Biden seeks to roll back Trump-era reforms in higher education. He is doubling down on promoting and institutionalizing divisive Critical Race Theory (CRT), the 1619 project, and Title IX programs. Other than minor foreign policy continuity with the Trump administration, especially in regard to Afghanistan and somewhat about a desire for detente with Russia, Biden, much to the chagrin of his supporters is proving to be as divisive and alienating as the president he served under, Barack Obama. Indeed, he is accomplishing the rare feat of making Jimmy Carter look good by comparison.

Biden claimed in his latest speech on voting rights that he stands against “the forces in America that value power over principle.” “Jim Crow 2.0 is about two insidious things: voter suppression and election subversion.  It’s no longer about who gets to vote; it’s about making it harder to vote.  It’s about who gets to count the vote and whether your vote counts at all.” Biden added. Meanwhile, normal people are wondering that the same government which wants vaccine passports to enter restaurants or airports, is so opposed to the other side desiring identity cards for voting, a process that should have far stricter gatekeeping. That only one side of the political spectrum, by the way, has embarked on an ideological crusade—one that seeks to promote transgender rights, CRT, and alternate history, or punish political opponents financially for their lifestyle choices or thought crimes, and abolish both the filibuster and the Senate. These, it may be safely said, constitute the most divisive challenges to the fabric of the American republic, and American constitution in recent memory.

Whether Biden, a longtime centrist, actually believes in this program of radical change is a moot point. The cold, hard truth is that the institutional pressure in Washington is to move left as quickly as possible. In my view, Biden, regardless of his mid-century Cold war deal-making instincts, is at the end of the day a victim of the same “personnel is policy” problem that plagued Trump, another mid-century deal-making businessman.

Those personnel, from speech writers to policy advisors, are mostly urban and liberal. As Peggy Noonan wrote,

[w]hen national Democrats talk to the country they always seem to be talking to themselves. They are of the left, as is their constituency, which wins the popular vote in presidential elections; the mainstream media through which they send their messages is of the left; the academics, historians and professionals they consult are of the left. They get in the habit of talking to themselves, in their language, in a single, looped conversation. They have no idea how they sound to the non-left, so they have no idea when they are damaging themselves.

Well, possibly. Perhaps it is a loop, and they have no idea of what they are doing and how toxic and authoritarian they sound. For the sake of statistical possibility, however, it is prudent to consider a different hypothesis. These Democratic myrmidons are not incompetent but, rather, ideologically fanatical and the only reason they cannot run a roller over half of the country with raw power is because of the beautiful design of the centuries-old system, one that nudges towards compromise. In a binary polity, when one side is in power and is determined to wreck the checks and balances that this constitution provides, they are the authoritarians, not the side that is opposing them.

As Biden’s poll numbers continue to crater, he would do well to ponder that Americans want real progress, not the nostrums peddled by progressivism that substitute an authoritarian streak for real liberties. So far, however, he seems intent on intent on placating the Left. The more he does, the further he will be left behind.