Joe Biden, The Realist, For President? 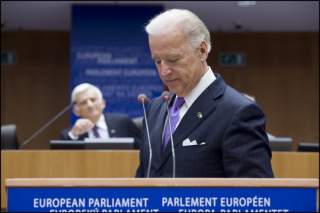 While many Democrats might be worried that a Joe Biden candidacy might further divide an already fractious party, one group is certainly hoping that he jumps into the race—foreign-policy realists. If the vice president decides to sit it out, interventionism will retake the White House in 2017.

As the debate at the Reagan Library made perfectly clear, the Republican candidates perceive themselves to be in a competition to prove their toughness and bravado. The campaign of Rand Paul, the lone exception, foundered largely as a result of his restrained foreign-policy views. The GOP will certainly nominate a hawk, one who is advised by the same people who thought that invading Iraq was a great idea.

Without Biden, the Democrats will just as certainly nominate a liberal internationalist. Hillary Clinton was the most influential liberal in President Obama’s first administration, advising him to ignore his instincts and send more troops to Afghanistan. A year later, amid the optimism of the Arab Spring, liberals in Europe and the State Department convinced the president to help overthrow Muammar Gaddafi. It is no coincidence that both departures from restraint were blunders. Vice President Biden opposed each one.

From a realist’s perspective, liberals and neoconservatives are two sides of the same coin, differing on means rather than ends. Both think of the world in moral terms, and believe that the United States has a responsibility to use its power to combat the world’s various evils. Neoconservatives tend to favor unilateral, military tools, while liberals prefer multilateral approaches that respect international law. Both believe that the United States is an indispensable nation with no choice but to engage actively in the crisis du jour.

Like all Americans, realists wish desperately that democracy would spread around the world, and that human rights of all people were respected everywhere. But most also agree with John Quincy Adams, who famously counseled the United States to support freedom and liberty everywhere, but go not abroad in search of “monsters to destroy.” This leads to a restrained approach to foreign affairs, and far fewer unforced errors.

Realists earn the title by having a healthy understanding of how the world works, and of the capabilities of the United States. They understand that there are limits on what even the strongest country can achieve, and that intervention often makes problems worse. Perhaps more than anything else, realists keep danger in perspective. They know that threat is a function of both capability and intent. When either is zero, so is the threat. ISIS may have the intent to attack the United States, for example, but it does not have the ability to do so. Iran might want to bring “death to America,” but its capability is limited. Neither currently poses a dire threat. Despite interventionist narratives to the contrary, the United States is actually a remarkably safe country, especially when compared to any other in any era.

From the beginning, President Obama has governed as a realist. He has refused calls to embroil the United States in conflicts that are not in its interest, from Syria to Ukraine, and has not overreacted to threats. He has realized that a sure way to make the terrible situation in Syria worse is to send in the Marines. And he has recognized that diplomacy is possible even with odious regimes, such as Iran and Cuba, which has driven the moralists in the country to apoplexy.

The ability to keep both danger and U.S. capabilities in proper perspective allows realists to avoid unnecessary foreign adventures. To paraphrase the president, his administration has not done stupid stuff.

Neoconservatism leads to Iraq. Liberalism, to Libya. Realism, to neither.

The dominant GOP narrative today is that President Obama’s two terms have left the country weak and disrespected. No one who understands power or threat can believe that to be true. The realist foreign policy of the Obama administration has proven to be a remarkable improvement over its predecessor, and would be far better than those outlined by any of the current candidates.

Only one candidate would continue the realism that has marked President Obama’s term, and avoid the kind of blunders that inevitably follow interventionist foreign policies. For that reason, and many others, this country needs Vice President Biden to run. And win.

Christopher J. Fettweis is an associate professor of political science at Tulane University. His most recent books are The Pathologies of Power: Fear, Honor, Glory and Hubris in U.S. Foreign Policy (Cambridge 2013) and Making Foreign Policy Decisions (Transaction 2015).