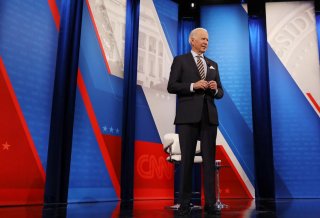 President Joe Biden shot down a Democratic proposal on Tuesday that would cancel $50,000 of student loan debt per borrower but signaled an openness to forgive some level of debt—a posture that’s already received sharp backlash from far-Left members of the party.

“I will not make that happen,” Biden said at a CNN town hall in Milwaukee after a member of the audience pressed him to cancel at least $50,000 in debt for every borrower.

Biden added, “I do think in this moment of economic pain and strain that we should be eliminating interest on the debts that are accumulated, No. 1. And No. 2, I'm prepared to write off the $10,000 debt, but not [$50,000],” saying that he doesn’t believe he has the presidential powers to push through that type of legislation.

The president’s remarks come as he faces intra-party pressures from top congressional Democrats who linked together to introduce a resolution earlier this month, led by Senate Majority Leader Chuck Schumer (D-N.Y.) and Sen. Elizabeth Warren (D-Mass.), that calls on Biden to use executive action to wipe out up to $50,000 in federal student loan debt for every borrower. Democrats involved in the push claim that the president has the executive power to do so.

The White House, however, has previously said that the Biden administration is reviewing laws to see whether he has the authority to unilaterally cancel student loan debt without congressional approval. Press secretary Jen Psaki said this week that Biden will sign off on canceling $10,000 for every borrower if Congress drafts and passes a bill over the issue.

But the president did reaffirm his stance Tuesday over making community college free for all Americans and also noted that he supports allowing families who earn less than $125,000 to attend state schools at no cost.

Despite Biden’s openness to forgiving some level of debt for borrowers, his comments Tuesday night sparked uproar from progressive party members, opening up an early party rift over liberal policy.

Schumer and Warren released a joint statement on Wednesday saying, “Cancelling $50,000 in federal student loan debt will help close the racial wealth gap, benefit the 40 [percent] of borrowers who do not have a college degree, and help stimulate the economy. It’s time to act. We will keep fighting.”

Some experts expect Biden to see more criticism from far-Left party members, especially since this was his first time bluntly distancing himself from the $50,000 student loan forgiveness effort.

“The president is likely to see push-back from the Left wing of the Democratic [party] who have wholeheartedly embraced the notion of a big bailout. This marks the first time during his presidency when Biden has made his position of opposition to that plan clear,” Beth Akers, a resident scholar at the American Enterprise Institute, said. “Republicans who have failed to offer a compelling political alternative to widespread loan forgiveness will likely be breathing a sigh of relief knowing that the administration doesn't support the more aggressive proposals from the far left.”

“Who cares what school someone went to? Entire generations of working-class kids were encouraged to go into more debt under the guise of elitism. This is wrong,” Ocasio-Cortez tweeted after the town hall. “Nowhere does it say we must trade-off early childhood education for student loan forgiveness. We can have both.”

The president had proposed that the government shouldn’t forgive the debts of borrowers from elite schools, like Harvard, Yale and Penn—a comment that clearly incensed Ocasio-Cortez.

Ocasio-Cortez added, “The case against student loan forgiveness is looking shakier by the day.”

“We’ve got the *Senate Majority Leader* on board to forgive $50k. Biden’s holding back, but many of the arguments against it just don’t hold water on close inspection,” she said. “We can and should do it. Keep pushing!”

But other experts, including James Morone, a political science and public policy professor at Brown University, don’t anticipate Biden to receive that much progressive pushback.

“Will he get pushback from Progressives? Not much. That's because Biden has stuck to his guns on a $1.9 trillion bailout despite calls for pairing it down from the likes of Larry Summers,” Morone said. “In addition, he’s sticking to the rise in the minimum wage. Progressives are not going to split with him or rock the boat too hard.”

Biden and congressional Democrats are in the midst of passing a massive, partisan coronavirus relief package through budget reconciliation, a legislative process that doesn’t need Republican support.

Morone added, “I think this is Amtrack Joe being Amtrack Joe. Biden is clearly trying to pivot Democrats away from an image of supporting the privileged to standing by the working class. The big tell in his answer was bringing in Harvard and Yale—no forgiveness of elite programs. Then pivoting to community colleges. They should be free. That was vintage Joe from Scranton.”