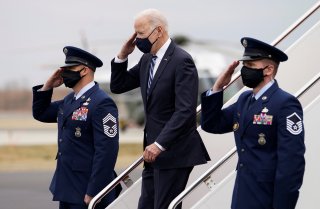 The stimulus campaign aims to highlight certain aspects of the legislation that Americans will directly benefit from, including the $1,400 rescue checks, and to inform voters how to access the relief.

Another key talking point on the campaign trail will be about boasting the bipartisan support of the package from voters, according to administration officials, though the bill passed in a starkly partisan vote, with no backing from Republicans.

Officials and outside allies also noted that a portion of the Biden team’s political calculation is to restore trust in the federal government and to connect with all sorts of voters, including both Democrats and Republicans.

“It’s one thing to pass the American Rescue Plan. It’s going to be another thing to implement it. It’s going to require fastidious oversight to make sure there is no waste or fraud and the law does what it’s designed to do,” Biden said Friday.

“We have to get this right. Details matter. Because we have to continue to build confidence in the American people that their government can function for them and deliver,” he said.

Biden will visit Pennsylvania on Tuesday and Georgia on Friday, with Vice President Kamala Harris. These are two states that he flipped in the 2020 presidential election and where there are fierce Senate races for next year’s elections.

“With a bill like this, a big part of implementation and actually making the bill work is making the public aware of it, making them know the help that they have access to, and the benefits that they’ve gotten, so that they . . . act accordingly and help engage in the economy, help make sure they get the health care that they need, and help make sure they get the vaccine shots in their arms,” Jesse Lee, vice president of communications at the Center for American Progress Action, said.

Harris and second gentleman Doug Emhoff will travel to Colorado on Tuesday after appearances in Nevada on Monday. Emhoff will also head to New Mexico on Wednesday.

First lady Jill Biden will visit New Hampshire on Wednesday after being in New Jersey on Monday.

Although public polls revealed that the stimulus package is widely backed by voters from both sides of the aisle, administration officials said that Democrats failed to sell former President Barack Obama’s economic recovery bill in 2009 and Affordable Care Act in 2010. If the Biden administration and Democrats successfully promote the pandemic-related legislation, that would likely serve as a dominating point heading into the 2022 midterm elections.

“President Biden and the Democrats made the right decision here in the sense that the American people were really hungry for a bold solution to the multiple crises that they’re in,” Lee said. “Now they have to implement it, but this is a bill that will help end the virus in this country and will help get the economy back on its feet.”

Several groups have also hopped on board to boast support and awareness of Biden’s package, including the Democratic National Committee, which is launching a sixty-second advertisement in battleground states and billboards targeting Republican lawmakers who opposed passage of the bill. American Bridge, a pro-Democratic super PAC, also ignited a multi-million dollar national campaign, with heavy advertising investments in Pennsylvania.

The Office of Public Engagement is working with advocacy and grassroots groups to monitor how they can teach constituents about what’s in the bill and how they can get it, as well as how the legislation will serve to improve underprivileged communities.

But the Biden administration’s effort is also a clear signal to ramp up a strong political backbone heading into the midterm elections and perhaps the 2024 presidential election, as Democrats hold razor-thin majorities in both chambers and as former President Donald Trump promises to pull the GOP back into control on Capitol Hill and teases of a third White House run in three years.

“Democrats will have a strong, kind of, result to run on. And Republicans will have a lot to answer for in why they opposed it. And I think we’ve already seen them struggling with that a lot,” Lee said.

In Georgia, Democratic Sens. Jon Ossoff and Raphael G. Warnock—who is up for reelection—are expected to join Biden on the stimulus campaign in the state, two lawmakers who played critical roles in flipping the Senate blue in the 2020 election.

Biden’s push could also serve as an early indication of boosting his own reelection chances, as discussions over who will seize the GOP in a post-Trump era have already intensified—of course, only if Trump doesn’t decide to take a crack at it. Although the president hasn’t indicated whether he intends to pursue a second term, he has expressed interest in the idea. And if he decides to step aside, that would prop Harris into the spotlight, who is conveniently also on the stimulus campaign trail over the next three weeks.

But experts noted that the results in mitigating the coronavirus and smoothing a path toward economic recovery will have a greater impact in an election than a stimulus blitz across the country.

“The condition of the economy and the state of the fight against Covid-19 will do much more to shape the midterm elections than anything the president says. The people will judge the administration on its results, not its rhetoric,” William Galston, a senior fellow in governance studies at the Brookings Institution, said.

“[Biden’s] main motivation is to do what he’s been called upon to do,” Lee said.