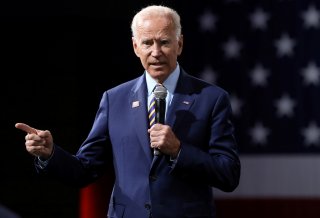 The Trump campaign’s recent painting of Biden as “soft” on China points to a much greater challenge faced by the former vice president. If he allows the foreign policy debate during the election to be framed as a contest between a nationalist and a globalist, and he is cast as the globalist—he is sure to discover that he rather not play that role.

Liberal elites favor globalism. They support seeing rights as human rights, rather than rights granted to people of this or that nation. They oppose closing borders to those who seek refuge from violence and economic deprivation. And they tend to favor free flow of trade across national borders and hence oppose protectionism. However, the overwhelming majority of American voters are nationalists. That does not mean that they are all xenophobic. However, they have little trouble, to put it frankly, with putting America, their nation, first. Hence, they are open to greatly limiting what the United States does overseas to promote human rights and democracy; they favor strong national borders; and efforts to protect American industries from unfair foreign competition. Their enthusiasm for international institutions such as the United Nations and the International Criminal Court, as well as U.S. foreign aid, is limited. These are the reasons being a globalist was not a winning ticket even before the pandemic struck.

To assess the effects of the coronavirus on the elections, it is useful to follow, in some detail, the way this issue was laid out by acute political analyst, Walter Russell Mead. He suggests that the coronavirus pandemic will either bolster nationalism or reignite globalism, depending on the ways the nations of the world respond to the crisis. Mead believes that the best course of action is to embrace globalism: “Both the medical and economic dimensions of the pandemic call for expert leadership and international cooperation,” he wrote in an op-ed published by the Wall Street Journal. “Neither the spread of a global disease nor its economic consequences can be dealt with by national governments on their own.” However, this is not what happened.  National governments “have primarily shaped the response.” Mead posits that this initial nation-based reaction could continue for a while because national politicians could gain clout due to public fear and the need to implement new domestic health and economic policies. On the other hand, Mead suggests that the World Bank and the International Monetary Fund could gain prominence as they help countries that “lack the resources needed to weather a shock of this kind,” which could help to tilt the world toward globalism. A Joe Biden win, Russell concludes, “would put the weight of the U.S. government back on the side of the post–Cold War program of multilateralism and globalization.” Donald Trump’s reelection would send the opposite signal.

Trump will not find it difficult to cast Biden as a globalist. Biden’s statements range from outright globalists to murky ones that muddle the issue. The former vice president lays out his foreign policy philosophy in an article published in the March/April 2020 issue of Foreign Affairs. One of its key elements is an emphasis on international institutions, alliances, relationships, and cooperation. He asserts that “[w]orking cooperatively with other nations that share our values and goals does not make the United States a chump,” and he concludes that “[w]e are facing adversaries, both externally and internally, hoping to exploit the fissures in our society . . . The answer to this threat is more openness, not less: more friendships, more cooperation, more alliances, more democracy.” He details the ways he will build up bonds with the international community, for instance by strengthening NATO, an institution Trump has repeatedly attacked. Biden’s position on trade has evolved over time. During his six terms as a senator and two terms as vice president, he “was a reliable supporter of free trade pacts.” While he does not regret his vote for the North American Free Trade Agreement (NAFTA), he recently stated that “Fair trade is important. Not free trade. Fair trade.”

Trump’s reelection campaign has released ads that seek to paint Biden as too lenient toward China. Last summer, Biden stated that China is “not competition for us,” a comment that has faced criticism from the Left and the Right. Biden has since walked back his comment a bit, saying, “You bet I’m worried about China—if we keep following Trump’s path.” In short, Biden can be viewed either as a globalist or one who cannot easily be put into a single box on this issue. However, he is seeking to deny reelection to a fervent nationalist, during a pandemic that is reinforcing nationalism, which was a strong force to begin with.

To avoid falling into the globalist trap, Biden must make it clear that one can be a whole-hearted American patriot without being xenophobic. He must start by spelling out the reasons that people should be proud to be American. He can return to such well-established themes as the fact that the United States was born out of a rebellion against an authoritarian king and established the world’s first republic; put millions of its young in harm’s way to defeat fascism during World War II, just as Europe was about to be overrun by Hitler; won the Cold War against communism; and so on. He would do well citing the remarks President Barack Obama made on the Edmund Pettus Bridge on the fiftieth anniversary of the marches from Selma to Montgomery, Alabama: “And yet, what could be more American than what happened in this place? What could more profoundly vindicate the idea of America than plain and humble people—unsung, the downtrodden, the dreamers not of high station, not born to wealth or privilege, not of one religious tradition but many, coming together to shape their country’s course?” And he must do so without bracketing such lines with apologies to the left, listing all the flaws of America, while acknowledging that there is indeed an urgent need for reforms.

Biden cannot compete with Trump by being more nationalistic. He also cannot do well if he allows himself to be cast as a globalist. He hence must walk a tightrope of showing that one can be patriotic without being nationalistic, that, to quote de Gaulle “Patriotism is when love of your country comes first; nationalism when hate for people other than your own comes first.” The pandemic has shown that the virus knows no borders but it has also revealed that the international institutions, while helpful, are far from ready to assume the main leadership in curbing the pandemic. This critical mission, which for now trumps all others, is carried out by national governments. The globalist position was already much undermined by national populism over the last years. The pandemic made it very difficult to defend globalism, whatever its inherent merits.