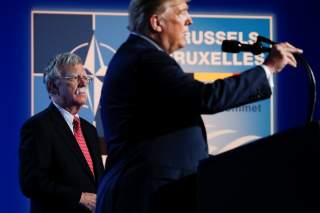 It has been less than a year since John Bolton took over as Donald Trump’s national security adviser, but the White House is already starting to change its tune on foreign aid policy.

H. R. McMaster, Bolton’s predecessor, tried to reconcile the “America First” agenda with a more internationalist approach. He and his deputies called this approach “principled realism,” and they codified it in a new National Security Strategy, asserting that the U.S. government will “aid others judiciously, aligning our means to our objectives, but with a firm belief that we can improve the lives of others while establishing conditions for a more secure and prosperous world.” The National Security Strategy also signaled that one of the principal goals of U.S. foreign aid policy under the Trump administration would be to “encourage states to make choices that improve governance, rule of law, and sustainable development” and “prioritize programs that empower reform-minded governments, people, and civil society.”

McMaster’s team zeroed in on a key instrument for achieving this goal: the Millennium Challenge Corporation (MCC).

If you’re not familiar with the MCC, then here’s what you need to know: in 2002, President George W. Bush called for “a set of clear and concrete and objective criteria” to channel aid funds to “nations that root out corruption, respect human rights, and adhere to the rule of law.” These nations, he said, will “invest in better health care, better schools and broader immunization,” and they will “have more open markets and sustainable budget policies." The nations that meet these criteria will be places “where people can start and operate a small business without running the gauntlets of bureaucracy and bribery,” he added. A bipartisan coalition in Congress quickly responded and passed legislation in 2003 to create a new federal agency—called the Millennium Challenge Corporation—to administer this annual competition for U.S. aid funding among low-income and lower-middle income countries.

Since then, the MCC has used a set of third-party metrics to annually assess the extent to which more than one hundred developing countries are ruling justly, investing in their people, and promoting economic freedom. The MCC makes its analysis transparent through the publication of “country scorecards,” and at the end of each year the secretary of state meets with other members of the agency’s board of directors to determine which countries will be eligible to receive hundreds of millions of dollars in grant assistance from the MCC.  The U.S. government also showers praise on countries that meet the MCC’s stringent performance criteria, and calls out those countries that do not.

This strategy of recognizing and rewarding well-governed countries has promoted a “race to the top” among the countries competing for MCC funds. My colleague, Caroline Davis, and I recently assembled a first-of-its-kind dataset that measures the reform responses and nonresponses of 118 low-income and lower-middle income countries to the eligibility requirements for MCC assistance over a seven-year period. We found evidence of the “MCC Effect” in 45 out of 118 candidate countries—or 38 percent of the low-income and lower-middle income countries that could have plausibly been influenced by the MCC eligibility criteria—between 2004 and 2010.  Others have found that the MCC’s “good housekeeping seal of approval” influences how other donors spend scarce aid dollars, effectively moving money away from reform laggards and towards reform leaders.

So, it’s not too surprising that McMaster and his aides favored the idea of a muscular MCC with the resources and the authority to support reformers around the globe with a shared interest in promoting transparent, accountable, and accountable governance.

But with Bolton’s team now in place at the National Security Council, there is a growing gap between the U.S. government’s foreign aid policy on paper and in practice. Trump increasingly refers to aid not as a tool for encouraging domestic reforms, but rather as an instrument of realpolitik that should be used to purchase the foreign-policy allegiance of other countries. At the UN General Assembly in September 2018, he declared that “we are only going to give foreign aid to those who respect us and, frankly, are our friends.”  His national security adviser is singing from the same sheet of music. Bolton is on the record as saying that “votes in the United Nations should . . . cost countries that vote against us.”

But the de facto strategy that appears to be taking hold at the National Security Council under Bolton (using foreign aid to reward those who pledge allegiance to U.S. foreign-policy priorities and punish those who do not) and the de jure strategy developed under McMaster (using foreign aid to strengthen pro-reform forces within developing countries) cut in two different directions. In order to better understand why these two strategies cannot be easily reconciled, it’s worth considering where the MCC has previously succeeded—and failed—to incentivize reform in the developing world.

Caroline Davis and I have recently published new empirical evidence that the MCC eligibility standards are particularly effective at incentivizing reform in countries that install technocratic teams with executive authority to introduce disruptive changes to the status quo. This finding suggests that the Trump administration’s National Security Strategy rests on a strong evidentiary foundation, but we also uncovered another finding that should give John Bolton and his deputies pause: countries that consistently voted with the United States in the U.N General Assembly—a key measure of support for U.S. foreign policy—were significantly less likely to undertake domestic reforms that would make them competitive for MCC funding. The most obvious explanation for this pattern is that some governments chose not to expend much effort on risky, status-quo-altering reforms because they knew that the U.S. government would financially reward them regardless of their reform records.

Therefore, as Bolton and his deputies undertake a broad review of U.S. foreign-assistance policy, they should carefully consider the unintended consequences of reverting to the Cold War-era tactic of using aid to purchase loyalty and punish disloyalty. If the Trump administration wants to use aid to reward those who pledge allegiance to U.S. foreign-policy priorities and punish those who do not, then it should dispense with the notion that U.S. foreign assistance can also effectively incentivize the leaders of these countries to implement good governance reforms.

Dr. Brad Parks is the executive director of AidData, a research lab at William & Mary that works with governments and international organizations to improve the ways in which overseas investments are targeted, monitored, and evaluated. He holds a Ph.D. in International Relations and M.Sc. in Development Management from the London School of Economics and Political Science. His research has been published in academic and policy journals, including Science, Governance, World Development, the Journal of Conflict Resolution, International Studies Quarterly, and China Economic Quarterly.