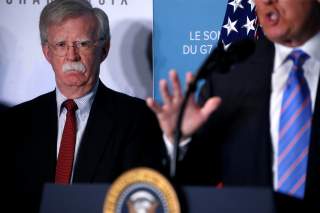 National Security Advisor John Bolton is great at wrecking international agreements. He’s terrible at building security. If we are to restore the momentum that President Donald Trump built over the past year but lost at Hanoi, then Trump will have to resist Bolton’s questionable advice and pay more attention to his own foreign-policy instincts.

A photo taken prior to the beginning of the “historic summit” between Trump and Kim Jong-un shows John Bolton sitting at the negotiating table with the president. The man who had conducted all the preliminary negotiations with the North Koreans, Stephen Biegun, was relegated to a seat along the back wall.

It came as little surprise, then, that the summit ended badly, without any agreement being signed and future negotiations in doubt.

If the intent of overall negotiations was to lower tensions and increase the chance of peace on the peninsula, then the summit was the perfect set-up. According to the South Korean officials I spoke to in Hanoi and Washington, the private conversations they had with both the U.S. and North Korean negotiating teams led them to believe a “small deal” had been hammered out by both sides. It wasn’t the “big deal” South Korea had hoped for, but a “small deal” would still have been a welcomed step on the path to ultimate success. It would have paved the way for a fourth summit between Moon Jae-in and Kim, one in which Seoul was expected to “continue the positive momentum.”

On February 28, when word first reached the Korean media center in Hanoi that the summit had suddenly ended without an agreement, I could hear a palpable gasp among the shocked group. In the weeks following the summit, I have talked to sources in South Korea and I have talked to another source with direct access to North Korean officials. My sources paint a consistent and grim picture: although the government in Seoul is publicly putting a good face on the situation and the North Korean press has been mostly silent on the summit’s outcome, the view behind the scenes is far more pessimistic.

North Korea is in no hurry to schedule so much as working level talks with the United States. Meanwhile, Bolton has appeared to move the goalposts. In an interview after his return from the summit, Bolton emphasized that North Korea needed to give up its entire nuclear program “and everything associated with it” or the sanctions would remain in place. Perhaps, he warned, “we’ll look at ramping those sanctions up.” North Korea’s response was about what anyone could have expected.

Last Friday Vice Foreign Minister Choe Son-hui said that Bolton and Secretary of State Pompeo had “created the atmosphere of hostility and mistrust and, therefore, obstructed the constructive effort for negotiations between the supreme leaders of North Korea and the United States.” She also said that Kim would make an announcement in the near future as to whether negotiations would even continue. It is notable that Trump had been very effective at getting meaningful concessions from North Korea up until the Hanoi Summit.

In September 2017, Kim had reached the culmination of many provocative nuclear tests—including an alleged ICBM capability to deliver a nuke warhead—with a blast estimated to be a massive one hundred kilotons. Since that time, however, Trump has helped to coax a missile-testing moratorium from Kim, a nuclear test ban, the return of three hostages, the resumption of repatriation of American war dead from the Korean War, and at least the partial destruction of the nuclear test facility.

These are not minor concessions and they represent a major walk-back of the tense days of late 2017 when Sen. Lindsey Graham predicted there was a 30 percent chance of war on the Korean Peninsula. All of that progress towards peace could be squandered if the National Security Advisor’s views continue to prevail on Trump—because Bolton has a history of getting out of agreements, not creating them.

And to the detriment of the country.

In his 2007 book Surrender is Not an Option, Bolton openly bragged about his role in convincing George Bush to quash the 1994 Agreed Framework. In 2001 he engineered the effort to convince Bush to withdraw from the 1972 Anti-ballistic Missile (ABM) Treaty.

Two months after assuming the role of National Security Advisor, Bolton influenced Trump to withdraw from the Joint Comprehensive Plan of Action (JCPOA) with Iran. And late last year, Bolton convinced Trump to withdraw from Reagan’s 1987 Intermediate-range Nuclear Forces (INF) treaty. But out of all of Bolton’s “successes,” killing the Agreed Framework in 2002 has cost America the most.

One year before that agreement was quashed, the CIA reported to Congress that “North Korea probably has produced enough plutonium for at least one, and possibly two, nuclear weapons.” Had the Agreed Framework remained in force, then Pyongyang’s weapons program would have remained under constant international scrutiny. Even if the North continued cheating on a covert program, as intelligence discovered they were in 1998, the constraints of international monitors would have continued to effectively curtail its pursuits.

With Bolton’s successful removal of those constraints, however, we now know that those alleged “one and possibly two” nuclear warheads they were alleged to have had in 2001 have mushroomed up to sixty. Additionally, North Korea’s missile technology has vastly improved. We must avoid the trap of seeking the perfect deal at the expense of an effective peace regime—and end up with neither.

Demanding full nuclear disarmament from North Korea before giving any reciprocating steps is guaranteed to lead to failure and it will likely lead to another increase in tensions. American nuclear and conventional military power has effectively deterred the far more capable nuclear powers of Russia and China for decades and can deter Kim indefinitely. Pursuing peace, not up-front CVID, is the best path to ensuring long-term security for America.