John McCain Was a Fighter and a Hero 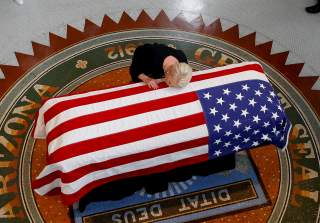 The death of Senator John McCain, a genuine American hero with whom I had many differences but whose bravery I always respected, brought back many memories of my interactions with him over the past several decades. I did not personally meet Arizona Senator (then Congressman) John McCain until early 1983, shortly after he was elected to the House from Arizona’s first district and I was serving as an assistant secretary of defense in the Reagan Pentagon. However, I already felt that I had known him for over two decades and, in that initial meeting, I told him how much I admired him.

I first became acquainted with John McCain, who was a lieutenant at that time, when I reported for duty in pre-flight training at the Naval Air Station in Pensacola, Florida, in January 1963 as a first step in becoming a naval flight officer. Among those in the naval aviation community, he was already a legend. Not only was he Navy royalty—being the son and grandson of admirals—but he also had a reputation as a party man and a daredevil pilot. He had actually survived two plane crashes in the early 1960s while going through flight training. He was, in effect, a predecessor to Tom Cruise’s character in Top Gun.

The next time I heard about McCain was in October 1967, after I had completed my active duty obligation and was in graduate school, when I read R. W. (Johnny) Apple’s article in the New York Times about Lt. Comm. McCain being shot down and captured in North Vietnam. Not only did the article mention that McCain was a scion of a distinguished Navy family (his father became a four star admiral in May 1967), but also had doubts about the morality and effectiveness of the massive U.S. bombing campaign then being conducted in Vietnam. When a rocket was accidently fired from a plane on the deck (it killed 137 of them and wounded countless others), McCain—having seen what bombs and Napalm did to his fellow sailors on the USS Forrestal aircraft carrier—said that he was not sure that he wanted “to drop anymore of that stuff on North Vietnam.” This was a conclusion I had similarly come to during my time in Vietnam in 1965 and 1966, but I was grateful to hear it from someone so important in the military.

My next awareness of McCain came in March 1973 when I was called back to active duty. (I had joined the reserves after completing my active service to help debrief the prisoners of war who were released after the end of our military role in Vietnam.) While I did not personally debrief Lt. Comm. McCain, the other prisoners of war continuously spoke in glowing terms about his bravery and courage. I eventually read his classified debriefing and was overwhelmed by how he was able to survive the beatings and torture and solitary confinement and how courageous he was to refuse the early release that the North Vietnamese offered him when they discovered who his father was. I had a tough enough time making it through the one-week survival training that was intended to prepare us for capture. I could not imagine surviving this for five and a half years, including two years in solitary confinement.

While I will always admire McCain for the unbelievable courage and fortitude during his five and a half years as a prisoner of war, my relationship with him deteriorated during the time he served in the Senate. In early 1986, shortly after I left the Pentagon and was working for Raytheon, one of his staffers called the company and complained about how I was part of a group of former members of several national-security agencies that was proposing sensible reductions to the defense budget that would cushion the blow of the first sequester, which had been recently passed by the Congress (our proposed reductions were actually less than the Reagan administration eventually accepted). As a result of his call and those of two Navy assistant secretaries, Raytheon fired me.

Several months later, when I brought this incident up to him during a hearing before the Senate Armed Services Committee on how to reduce defense spending responsibility, McCain publicly and fiercely, in a very vindictive manner, accused me of character assassination. However, as a result of the efforts of Georgia Sen. Sam Nunn, the former chairman of the committee, and with the acquiesce of McCain, the staffer eventually sent me an apology letter.

My next significant encounter with McCain came in 1993 when I testified in support of President Clinton’s proposal to drop the ban on gays in the military. During the hearing, which lasted six hours, McCain, who was upset with my position (my military and Pentagon background apparently gave me credibility on the issue), called me disingenuous. Shortly thereafter, when one of his staffers ran into my daughter, who was then working in the office of the Senate’s Legislative Council said, “You’re not related to him, are you?”

Since that contentious hearing, McCain and I have disagreed over issues ranging from the war in Iraq to appropriate levels of defense spending in several congressional hearings—but never with the same level of intensity as occurred in the 1980s and 1990s.

Even though I supported George H. W. Bush and Bob Dole for president I could not support George W. Bush in 2000 and was glad when McCain and his Straight Talk Express entered the race. I had met W. when I worked in his father’s campaign and did not believe he was up to the job, nor did I approve of how he worked the system to avoid going to Vietnam. Moreover, what the Bush people did to McCain in the South Carolina primary—that is, claiming the young girl who the McCain’s adopted from Bangladesh was an illegitimate child fostered by McCain out of wedlock—that reinforced my concerns about Bush. McCain, however, did throw his support to W. in the 2000 election, and indeed invited him to deliver a eulogy at his funeral.

Having worked in the Obama campaign, my admiration for McCain was rekindled when I saw how he handled the question raised at a town hall meeting about then-candidate Obama not being a U.S. citizen. It was completely restored in January 2017 when I testified before the Senate Armed Services Committee on the proposed fiscal year 2018 defense budget. After the hearing—in which I expressed several concerns about the size and distribution of the budget—Senator McCain, the chair of the committee, approached me and told me how much he respected me for standing up for what I believed in over the years, regardless of the consequences. Coming from someone who was never afraid to stand up for what he believed in, this is something that I will always value.

That encounter is something I will never forget.