John Quincy Adams Would Stay Out of Syria 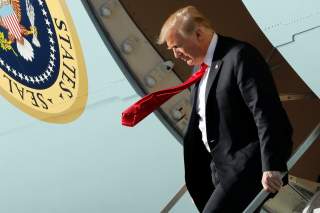 Describing Bashir al-Assad as “evil” and a “monster” for his use of chemical weapons, the president directed an attack that dropped over a hundred missiles and bombs on Syria, the second such aerial bombardment in the past year.

Adams, on the other hand, is often cited by anti-interventionists for proclaiming in 1821 that “America goes not abroad in search of monsters to destroy.” But Trump’s military operation did not really violate the Adams rule, because it was intended to destroy only Assad’s poison gas factories and storage facilities, not the regime itself.

There is one monstrous overseas adversary the president is explicitly committed to eradicating: the terrorist group ISIS, in both Syria and Iraq. Throughout his campaign and subsequently he has graphically condemned violent Islamist extremists for “cutting of people’s heads” and other atrocities.

Even here, however, Trump’s rhetoric can find an echo in a surprising view expressed by Adams in 1830, after his presidency, with what today might be seen as a trace of Islamophobia:

“Mahomet declared undistinguishing and exterminating war as a part of his religion, against all the rest of mankind; a war of twelve hundred years has already raged. That war is yet flagrant; nor can it cease but by the extinction of that imposture.”

American policy under this administration and its predecessors is directed only at criminal groups, not an entire faith. But even when ISIS is completely uprooted from Syria, Assad will remain in power. He will be able to continue his monstrous deeds that have killed a half-million Syrians, mostly with conventional weapons and mostly without the photos of babies dying in agony that have so affected this president.

That is the third lesson Assad has learned from recent events: keep the media away from the scenes of carnage you are creating so as to avoid upsetting Trump and the rest of the world. The first two lessons: Russia and Iran have your back, up to a point. And, America, even under Trump, will not threaten the survival of your regime, no matter what you do.

Would John Quincy Adams be as proud of this resolute noninterventionism today, as he was when he said of a far weaker America’s first half-century: “She has abstained from interference in the concerns of others, even when conflict has been for principles to which she clings?”

Maybe not, since he also said in his let-monsters-be speech: “America, with the same voice which spoke herself into existence as a nation, proclaimed to mankind the inextinguishable rights of human nature, and the only lawful foundations of government.”

There are many regimes flouting human rights around the world and the United States does not have the resources, or the will, or the legal authority to challenge them all. But when bad rulers commit war crimes and crimes against humanity, even the United Nations, through its new doctrine of Responsibility to Protect, recognizes the moral obligation and legal right of other governments to intervene to save a population in peril. That is all the more compelling when U.S. strategic interests in the region and beyond are also implicated.

U.S. policy in Syria used to be, and aspirationally still is: it is time for Assad to go. The task of achieving that outcome was much more feasible at the time the objective was stated—before the Obama administration allowed Russia and Iran to fill the vacuum and displace the anti-Assad opposition. But President Trump should reconcile the moral and realist strains in John Quincy Adams’s thought by reaffirming that the world can no longer tolerate the Assad regime and Washington will work with the Kurds and other democratic forces to end it.

The United States needs to project the firm vision, not a vague hope, of a new inevitability in Syria—Assad will go—and compel Russia and Iran through various means to adjust to that reality.

Washington, in other words, should apply to the larger picture the approach Defense Secretary James Mattis once described when asked what keeps him awake at night: “Nothing,” he said, “I keep others awake.” As of now, the monster Assad rests easy at night.

Meanwhile, the rulers in Beijing and Pyongyang draw the appropriate lessons.

Joseph Bosco served in the office of the secretary of defense, 2002–2010. He previously taught U.S.-China-Taiwan relations at Georgetown’s School of Foreign Service and is a fellow at the Institute for Corean-American Studies (ICAS).