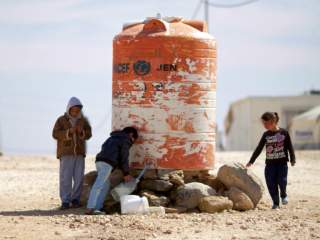 Awad Hajjara has known ten tour-guide colleagues that left Jordan in recent years. Many others have given up the profession to take other jobs. In a country where tour-guide licenses take years of study to obtain, it is symbolic of a larger problem. Tourism to this small Middle Eastern country has fallen by eighty percent in recent years, says Hajjara. Since the Arab spring, tourists are reticent to come. Fearful of what is happening in Iraq and Syria, they are staying away, even though Jordan remains a peaceful country with a robust military and strong tradition of stability.

Irbid in northern Jordan is the city center of the second most populous governorate, with around 1.7 million people. Since the Syrian civil war broke out in March of 2011, this city and nearby Ramtha on the border with Syria have been on the frontline of a massive exodus of Syrian refugees from southern Syria. The UNHCR estimates that 642,000 Syrian refugees in Jordan today, but the overall number of Syrians is thought to be around 1.2 million. For a country of 6.7 million Jordanian citizens, this refugee crises has been a transformative experience. Many Jordanians will point out that the country accepted hundreds of thousands of refugees from Iraq during the years of turmoil that began in the 1990s and continue to today. In 1948 Jordan hosted, and then provided citizenship to, hundreds of thousands of Palestinian refugees.

Many of the Syrian refugees that came to Jordan initially ended up in Zaatari refugee camp, the fourth largest refugee camp in the world, and the largest in the Middle East. This once-massive sprawling tent city eventually set down semi-permanent roots in a bleak desert landscape thirty miles east of Irbid. In 2013 the UNHCR had two hundred thousand registered refugees living at the facility in tents. Three years later, that number has declined to seventy-nine thousand. The tents have become caravans. Gavin White, the UNHCR External Relations officer at the camp, describes how water delivered by trucks is now running through pipes and the people have electricity. Handouts are done by coupon on debit cards so refugees can shop at a local market in the camp. Jordan has streamlined the process by which refugees can leave. In short, what was a humanitarian emergency has become a need to move towards a sustainable humanitarian model, White says. Towards that end, he recently met with a group at the Al al-Bayt University in Mafraq that is partnering with Microsoft to create a program for IT training that would involve both Syrians and Jordanians.

The struggle Jordan and its Syrian refugees face is what the future holds. Many refugees say that when they first fled in 2013, during the height of the crises, they thought they would return soon and that the Bashar al-Assad regime would fall. However, in the fall of 2015 Assad was bolstered by Russian intervention and the increasingly realization among the international community that Islamic State posed a major threat. In February a ceasefire came into effect between the Assad regime and almost one hundred different rebel groups. Groups such as Islamic State and Jabhat al-Nusra were not included in the ceasefire.

This has brought a temporary quiet to the border area of Jordan and Syria. Most refugees fled from the province of Daraa that borders Jordan. Locals say that not so long ago they suffered rocket fire from across the border and could see the fighting during the night. Houses shook from Russian bombing in Syria. But Syrians see little chance of return. This situation also affects children. According to White, around twenty percent of the people in Zaatari are under the age of five. UNHCR estimated last year that 57 percent were under age eighteen. While their parents used to dream concretely of return, the children are increasingly part of a lost generation, even if aid groups and others work hard to save them from that future. Formerly, children born here have a right to Syrian citizenship, not Jordanian. That requires making their way to the embassy in Amman and applying for citizenship from the same regime the parents fled. Privately some Syrians say that although they receive their birth certificates and documents from local hospitals, they would rather register their children with a local tribal leader or wait for conditions to change. Some refugees are seeking a new life elsewhere, accepting resettlement options in the United States and Canada. But without a coordinated effort, six hundred thousand people have nowhere to go.

This puts a strain on the Jordanian economy. Young Jordanians say they lack opportunity and that wages are low at around 250 dinars a month for entry-level positions. Petrol is now as high as $2 a gallon in a country where it used to be forty cents before the 2003 invasion of Iraq. Locals say meat in northern Jordan has tripled in cost as imports from Syria dried up. Syrians compete for jobs with Jordanians, complain some locals, when refugees are willing to work in a black market economy. This also drives up rental and home prices in the urban areas where many refugees live.

Jordanians describe economic burdens as far greater threats than terrorism. An eleven-hour gun battle in Irbid against an ISIS cell on March 1 led to seven terrorists killed by security forces. In November of last year a man killed five people, including two American contractors, in a shooting at a security training site in Jordan. The motive for that killing remains unclear. And in April an office of the Muslim Brotherhood in Amman was closed by police, according to Al-Arabiya.

It is clear the Kingdom takes terrorist threats extremely seriously, with a highly trained intelligence service and police checkpoints in certain areas. Posters of Sandhurst-trained King Abdullah II in military fatigues are not uncommon. There is a communal sense among many Jordanians that while their army and security can ferret out ISIS or extremists that might try to infiltrate among refugees or others, that the small country needs support from the West, particularly for its economy and youth, for it to remain in the stable state it currently enjoys in a Middle East that is in the heart of a maelstrom.