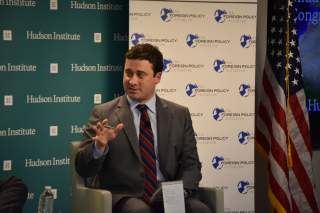 Josh Rogin is a talented reporter who has migrated from Foreign Policy to Bloomberg News to the Washington Post. Rogin has broken a number of stories over the years. Today, in a column in the Post, he comes up with what may be his most startling revelation to date: Trump is a thoughtful thinker about foreign affairs overseeing a careful and deliberate policy process. “The emerging pattern,” Rogin writes, “shows how President Trump’s campaign statements are being transformed into policy, senior White House officials tell me—and Trump himself is intimately involved.”

Yesterday, Trump held a meeting at the White House on North Korea, which only disclosed that his administration has no strategy for dealing with it. He also came close to signing a wacky executive order drafted by Steve Bannon and Peter Navarro that would have started the process to withdraw from NAFTA. Then, at the last moment, after talking to the president and prime minister of Mexico and Canada, Trump flinched. Meanwhile, the New York Times reports that Secretary of State Rex Tillerson may not fill some two hundred posts at the State Department until 2018. How does this square with Rogin’s soothing depiction of Trump’s foreign policy?

The main problem with Rogin’s piece is that he uncritically regurgitates the talking points disseminated to him by Trump administration officials, starting with Vice President Mike Pence. It’s fine for a reporter to serve as a kind of transmission belt for inside political dope that is revealing and reliable. But this isn’t it. What Rogin is doing isn’t reporting; it’s pandering.

Instead, we are treated to a series of ever more improbable assertions that sound more like a fairy tale than reality. Pence is at pains to portray Trump as a hands-on manager who has not changed his foreign-policy views. Trump’s somersault on NATO was apparently none at all, according to Pence. Instead, NATO has acceded to Trump’s demands for change, including ponying up more defense outlays. Despite Trump’s repeated adjurations to President Obama not to attack Syria over chemical weapons, his own strike on Syria apparently represented no change because Trump has rejected a “follow-on intervention.” If those don’t count as changes, then what about Trump’s flip-flops on the Export-Import Bank and refusal to brand China a currency manipulator? Are they, too, part of some coherent, grand Trump master plan?

Rogin also suggests, via Pence, that Trump is closely following foreign affairs. While Pence was traveling in Asia, we are told, “he spoke with Trump at least once every day.” But about what? Rogin never says.

Another problem for Rogin is that Politico features a lengthy and illuminating piece today called “The Education of Donald Trump” that pretty much contradicts everything in his piece, and comports with what we already do know about the president’s capricious nature. The piece begins by noting that Trump invited Politico reporters into the Oval Office for an impromptu meeting so that he could explain why his presidency was going swimmingly. They observe that he “rattled off the biggest hits of his first three months and promised more to come. It was classic Trump: Confident, hyperbolic and insistent on asserting control.”

Politico’s reporters go on to observe that “interviews with nearly two dozen aides, allies, and others close to the president paint a different picture—one of a White House on a collision course between Trump’s fixed habits and his growing realization that this job is harder than he imagined when he won the election on Nov. 8. So far, Trump has led a White House gripped by paranoia and insecurity, paralyzed by internal jockeying.”

What’s more, his aides are employing their own P.R. advisers. “White House staff,” we learn, “have learned to cater to the president’s image obsession by presenting decisions in terms of how they’ll play in the press.”

Maybe Trump will pull it together, but the portents are not good. The slapdash, one-page tax plan that his team has produced doesn’t even merit the term plan. Of course, one hundred days is wildly premature to judge a presidency. But if Trump wants to produce actual legislative and foreign-policy accomplishments, he’ll need to do a lot more than stage a rally in Pennsylvania this Saturday.