Judge Countries by their Intelligence Chiefs, Not Diplomats 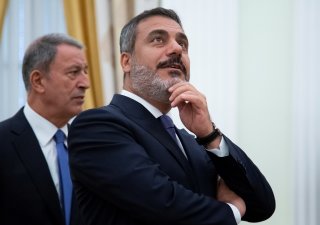 “If you find yourself in a hole, stop digging.” So quipped the early twentieth-century comedian Will Rogers. Various politicians over the years have used the logic of the so-called “Law of Holes” to urge a departure from business as usual. Perhaps it is time for the State Department to stop digging holes as well.

In the post–Cold War world, the State Department has repeated occasions incorrectly assessed foreign leaders and countries by allowing spin and wishful thinking to blind them to the reality of adversaries’ intents.

Even today, sizeable constituencies within the State Department continue to rationalize and make excuses for Turkey, Pakistan, and Somalia never mind each flirt with Al Qaeda and other radical groups, treat religious freedom with disdain, and increasingly side with America’s great-power rivals against the United States.

There is a rule-of-thumb, however, that top American diplomats could embrace: When assessing the intent of other countries, whether rivals or partners, judge them by their intelligence chiefs rather than by the public face constructed by their presidencies and foreign ministries.

Consider, Turkey. When Recep Tayyip Erdoğan’s Justice and Development Party (AKP) swept to power eighteen years ago, Erdoğan bent over backward to present a moderate face. “Secularism is the protector of all beliefs and religions. We are the guarantors of this secularism, and our management will clearly prove that,” he declared. Many diplomats bent over backward to affirm his rhetoric. Daniel Fried, assistant secretary of State for European and Eurasian Affairs, for example, dismissed concerns the new Turkish leader was Islamist and instead said assured that the Justice and Development Party (AKP) was just “a kind of Muslim version of a Christian Democratic Party.” Many within the State Department continue to run interference for Turkey and shield it from the consequences of its actions on the belief that Turkey remains more ally than adversary.

Perhaps had diplomats and members of Congress paid more attention to Turkey’s intelligence chief than on the country’s public imagining, they might not have consistently been a decade behind the country’s reality. Hakan Fidan has, with the exception of one month in 2015, served as the chief of Turkey’s intelligence service for more than a decade. Alarm bells sounded when Erdoğan first announced his intention to appoint the University of Maryland graduate in 2010. Fidan was both an admirer of the Islamic Republic of Iran and personally oversaw efforts to unravel Turkey’s historically close ties with Israel. It was not long before Fidan’s actions affirmed Western worries: Fidan reportedly betrayed an Israeli spy ring to Iran which had been working to gather information on Iran’s illicit nuclear program. Fidan subsequently oversaw outreach to both China and Hamas, and not only worked to supply Al Qaeda affiliates in Syria but also supported the Islamic State. Fidan might prefer to lurk in the shadow but a decade into his tenure, it is clear he represents the true Turkey more than the image projected during congressional delegations to Istanbul or cocktail parties at the Turkish chancellery.

Pakistan: Hamid Gul and the ISI

The same holds true with Pakistan. For decades, Pakistani diplomats outperformed their Indian counterparts in Washington. They projected an image of swath, cosmopolitan moderation while Indian rhetoric was trapped in non-aligned Third-Worldism and thinly-disguised anti-Americanism. Within the State Department, a Pakistan lobby grew which advocated for the South Asian country even as concerns over its behavior grew from nuclear proliferation to support for terrorism and ultimately for its promotion of the Taliban and its protection of Al Qaeda founder Usama bin Laden. There never should have been any confusion about where Pakistan stood when the veneer of its civilian leadership was stripped away. For the last half-century at least, Pakistan’s Inter-Services Intelligence (ISI) agency has dominated Pakistani society. It makes and breaks politicians and operates its own foreign and security policies which trump anything Pakistan’s elected class might embrace. The late Hamid Gul, ISI director-general in the final years of the Cold War, was unabashedly hostile to the West. While Pakistani President Pervez Musharraf joined the United States in the war on terrorism, Gul called for a “jihad against U.S. aggression” and spun wild conspiracy theories that it was Israel and not Al Qaeda which struck the Twin Towers on Sept. 11, 2001. Asad Durrani, ISI chief from 1990–1992, was blunt when I interviewed him in Islamabad years later. He argued that Musharaf’s pledge to assist Bush was a tactical blunder. “We lost the bargaining power to defend Pakistani interests,” he explained.  “Pakistan should have negotiated tougher. That’s realism.” The influence of the ISI is an open secret deemed impolite for American diplomats to discuss with their Pakistani counterparts. Politeness, however, should never trump basic issues of national security. It may be a tragedy for Pakistanis and Americans alike, but the ISI is the real Pakistani government.

Beginning in the wake of the Benghazi debacle, Secretary of State Hillary Clinton began promoting Somalia as a success story after years of state failure. Her successor, John Kerry, became the first Secretary of State to visit Mogadishu. President Donald Trump has largely neglected Africa, but Donald Yamamoto, U.S. ambassador to Somalia, has largely on his own initiative continued the fiction of Somali success even as independent assessors continue to rank Somalia to be the world’s most corrupt country and despite the fact that the central government controls only a few square blocks in the capital. To gauge the true Somalia, however, it is important not to believe Yamamoto’s public statements—after betting billions of dollars bet on President Mohamed Abdullahi Farmaajo, Yamamoto is loath to acknowledge his gamble failed—but rather the behavior of Fahad Yasin, Somalia’s intelligence chief.

Fahad was born in 1977 or 1978. Although his Kenyan/Somali documents and family members say different things, what is known is that in the early 1980s, his mother divorced his father. Afterward, she took Fahad to Mogadishu, where he settled in a Hawlwadaag shantytown and attended a number of religious seminaries providing free education to the poor. In the late 1980s, Fahad’s mother remarried a Salafi fanatic named Abdulkadir Gardheere. Gardheere insisted Fahad embrace Salafism or face eviction. After some months of resisting his stepfather, Fahad eventually caved in and embraced a religious extremism long foreign to Somalia’s more moderate, traditional religious culture. In 1991, as the Somali government collapsed, Fahad’s family fled toward Kenya, and he spent several years in the Utanga refugee camp near Mombasa where he radicalized further, eventually falling under the sway of Abdishakur Ali Mire and Gamal Mohamed Hassan, both of whom were involved with Al-Itihaad al-Islamiya, (AIAI), a U.S.- and UN-designated terror group linked to Al Qaeda. In 1997, Ethiopian troops killed Gardheere who was also fighting for AIAI, leaving Fahad deeply imbittered toward the “Western crusaders in East Africa.” After the 1998 Al Qaeda bombing of the U.S. embassies in Kenya and Tanzania, Fahad moved back to Somalia where he became active in and eventually a weekly columnist for Somalitalk.com, which is a radical nationalist internet forum. He subsequently disappeared and his whereabout are not exactly clear: some friends say he went to study Islam in Yemen, while others say he was actually in Pakistan. Either way, his radicalism grew. Upon his return, clansmen and politician Farah Shiekh introduced him to Wadah Khanfar, Farah’s classmate who had risen to become director-general of Al Jazeera, the Qatari satellite network. Wadah initially hired Fahad to tutor his children in the Quran, but then sent him back from Doha to Mogadishu to serve as a stringer for Al Jazeera. He called upon his own radical Islamist network to secure interviews from Al-Shabaab and rose through the ranks, eventually starting his own local affiliates. Beginning in 2012, Fahad became more directly involved in Somali politics, channeling cash from Qatar to various politicians and campaigns. Eventually, he put his bet on Farmaajo, the same man whom Yamamoto now promotes. That bet paid off, and Fahad now acts as chief of Somalia’s National Intelligence and Security Agency. Putting aside the irony of Yamamoto and a radical Islamist making common cause with Al Qaeda backing the same Somali politician, Fahad’s pedigree and his open embrace for terrorism provides a truer window into Somalia than does Farmaajo’s stage-managed appearances.

The same pattern holds true for Iran. Every four years, American diplomats and pundits analyze Iranian elections and speculate on whether reformists might triumph or whether hardliner politicians could come out on top. During the Obama administration, Jake Sullivan, one of Secretary of State Hillary Clinton’s top aides, predicated outreach to the Islamic Republic on the logic that a deal could bolster reformist popularity enough to marginalize hardliners. This was always naïve, however. Within the Islamic Republic, security and foreign policy is the domain of the supreme leader and the unelected security apparatus. Neither the president nor the foreign minister have any real role in such policies. This is why Iran’s then-covert nuclear program expanded rapidly against the backdrop of the Mohammad Khatami-era “dialogue of civilizations.”