Judicial Jenga: The Game Is Afoot to Confirm a New SCOTUS Judge 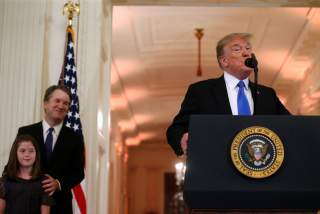 It was fitting that Edwin Meese was in the audience as President Trump nominated Brett Kavanaugh to the Supreme Court. The former attorney general under President Reagan arguably did more than any other single individual to create the conservative legal network from which Republicans now routinely select nominees like Kavanaugh.

Republicans fulminated against liberal judges for decades even while voting for presidents who appointed them. “Impeach Earl Warren!” they cried. But Warren was a Republican politician nominated as chief justice of the Supreme Court by a Republican president. Harry Blackmun, the author of Roe v. Wade, and John Paul Stevens, for decades the anchor of the court’s liberal bloc, were similarly elevated by Republicans.

Even as late as Justice Anthony Kennedy, the man Kavanaugh has been nominated to replace, Republicans have faced uncertainty about their judicial nominees. (Later, in fact—if Kennedy was a swing vote, David Souter proved to be a full-blown liberal.) The conservative judicial talent pool was too shallow. Lose a Robert Bork or Douglas Ginsburg, and pretty soon you were going to have to settle.

Gradually through the Reagan and George H. W. Bush years, that changed. That’s why by the time George W. Bush was president, there was no excuse for nominating a Harriet Miers—and conservatives gave him no quarter. There are now plenty of reliable conservatives with distinguished legal pedigrees and groups like the Federalist Society available to vet them carefully.

Nevertheless, that conservative legal network is going to face a new set of challenges. The near-certainty they can offer Republican presidents, to say nothing of the conservative base, flies in the face of the strategic ambiguity that speeds the confirmation process. Judges still must pretend that they have no idea how they would vote if given the opportunity to uphold or reverse Roe v. Wade, among other legal questions. Pro-choice Republican Sens. Susan Collins and Lisa Murkowski may hold Kavanaugh’s fate in their hands.

Of course, there is variety among legal conservatives. Some are more deferential to the executive or legislative branches, others less. Some are more libertarian, as Kennedy to some extent was. Others are themselves personally committed religious and social conservatives. They also vary in terms of their commitment to stare decisis and respect for judicial precedent. There are originalists and textualists.

It’s this last bit that can make Republican Supreme Court nominees less of a sure bet than their Democratic counterparts. It is how you wind up with Chief Justice John Roberts unexpectedly throwing a lifeline to Obamacare, where even Kennedy feared to tread.

Former Sen. Rick Santorum was among the few conservatives gauche enough to express disappointment with the Kavanaugh nomination, saying Trump was “bowing to the elite” with one of the safer picks from his Federalist Society and Heritage Foundation-approved list of twenty-five. But a lot of conservatives, including those now heaping fulsome praise upon Kavanaugh, felt it, especially after being allowed to fantasize about Amy Coney Barrett or Sen. Mike Lee on the Supreme Court.

Expect speculation to build that Kennedy arranged in some fashion to have Kavanaugh succeed him. It’s hard to see even that, combined with libertarian misgivings about Kavanaugh’s Fourth Amendment jurisprudence, tempering conservative enthusiasm in an election-year confirmation fight. But the margin for error is small.

Conservatives still must walk a tightrope where their high court nominees have just enough Souter-style stealth to be palatable to jittery moderates who fear abortion being outlawed yet also have a thick enough paper trail to reassure the strictest of constructionists.

For principled legal conservatives, the move from Kennedy as the weakest link to Roberts and Kavanaugh is assuredly a victory. Yet for the more results-oriented—which happens to include millions who vote for Republican candidates because they want to see conservative judges nominated and confirmed—there is the risk that chasing liberal precedents like Roecan begin to resemble Lucy with the football.