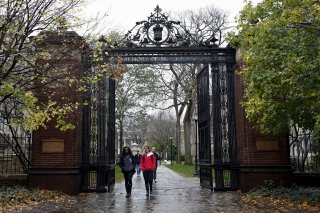 A useful way to look at the system of racial preferences we have instituted since the 1960s is as a rival constitution, as journalist Christopher Caldwell suggests. This new constitution is at war with the one of 1788, and the instability we see right now can only be resolved when one ends up prevailing.

Seen in that light, which I think is the proper one, the Justice Department’s decision that Yale University illegally discriminates against Asian and white Americans through its admissions process, is an important step toward enforcing the Constitution of 1788.

The finding, which came after a two-year investigation by DOJ’s Civil Rights Division, won't by itself solve all the problems we have created through racial preferences, to be sure. But it’s a breath of fresh air to hear Assistant Attorney General Eric Dreiband point out that “Unlawfully dividing Americans into racial and ethnic blocs fosters stereotypes, bitterness, and division.”

Another step back to the old Constitution is Dreiband’s observation that “It is past time for American institutions to recognize that all people should be treated with decency and respect and without unlawful regard to the color of their skin.”

More, of course, must be done to complete the journey. The Justice Department announcement that Yale’s undergraduate admissions process is “in violation of Title VI of the 1964 Civil Rights Act” did not mention that discrimination based on race in admissions, hiring, housing, etc., also violates the equal protection clause of the Constitution’s 14th Amendment.

Solving that will eventually be up to the Supreme Court, which must reverse some of its prior misguided rulings that race can be used as a factor in these actions

The Justice Department, for example, did not touch the Supreme Court’s Bakke decision, which has underpinned racial preferences in university admissions since 1978. The announcement acknowledged that “the Supreme Court has held that colleges receiving federal funds may consider applicants’ race in certain limited circumstances as one of a number of factors.” The problem, DOJ concluded, was that Yale’s use of race is “anything but limited.”

Obviously, more needs to be done. The high court in Bakke held that universities could not use racial quotas to make up for past discrimination. Supporters of the right of all Americans to be treated equally concluded they had won a victory.

But Justice Lewis Powell, who wrote the controlling opinion in the 4-4-1 decision, said race could be considered in combination with other factors, because “achieving a diverse student body is sufficiently compelling to justify consideration of race in admissions decisions under some circumstances.”

Under this rubric, race has been used in university admissions ever since.

In the case of Yale, the Justice Department notes, “the great majority of applicants, Asian Americans and whites, have only one-tenth to one-fourth of the likelihood of admission as African American applicants with comparable academic credentials. Yale rejects scores of Asian American and white applicants each year based on their race.”

The impetus to use race when making hiring and promotion decisions in the private and public sector came about as a result of the effort to end segregation and other forms of blatant discrimination during the civil rights era.

Kennedy’s successor, Lyndon Johnson, however, soon turned this policy on its head. “Affirmative action” came to mean the opposite: making hiring, contracting and housing decisions with regard to race, sex, and national origin.

Sadly and ironically, the effort to end the use of race in decision-making by institutions morphed in a matter of years into the explicit use of race when making decisions.

Caldwell’s “The Age of Entitlement” argues that this shift has “wrought a change in the country’s constitutional culture.” These new discriminatory measures were “not just a major new element in the Constitution. They were a rival constitution, with which the original one was frequently incompatible.”

Today, some of the most important voices in the hard-left movement that has become ascendant in the summer of 2020 are openly calling for discrimination.

This is why the DOJ’s move was so timely. We must start enforcing our laws in a colorblind fashion. The Justice Department rightly quoted the great abolitionist Frederick Douglass who said in 1890 that the “business of government is to hold its broad shield over all and to see that every American citizen is alike and equally protected in his civil and personal rights.”

These are the ideals we need — and to which we must return.

Mike Gonzalez, the author of “The Plot to Change America, How Identity Politics is Dividing the Land of the Free,” is The Heritage Foundation’s Angeles T. Arredondo E Pluribus Unum Senior Fellow.