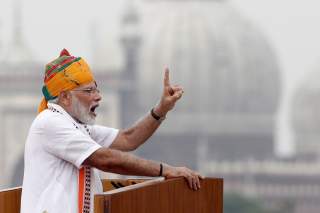 Major countries, especially democracies, rarely undertake major policy initiatives for a single reason. Changing the status quo usually involves significant economic and political costs, so a calculating country will only bear those costs if there are enough good reasons to do so. On August 5, the Indian government abruptly abrogated two articles of its constitution, Articles 370 and 35A. This, in effect, ended the special autonomous status previously enjoyed by the Indian-controlled portion of the disputed state of Jammu and Kashmir.

The prime minister, Narendra Modi, publicly offered a sweeping list of reasons, mostly centering on the promise of better governance and economic development for Kashmir. By integrating Kashmir as a “union territory” under direct rule by New Delhi, and doing away with arcane provisions that had previously stifled economic investment by non-Kashmiris in Kashmir, Modi declared that a new era was beginning. Kashmir, he promised, will witness a boon of adventure sports tourism, film-making, higher education, agriculture and energy, women’s rights, fairer representation and a crack-down on corruption.

Critics were skeptical, and rightly so. They charged that governance and development were the public face of a darker agenda—an effort to irrevocably change the identity of Kashmir to advance the majoritarian vision of a Hindu-nationalist India.

Modi’s party, the Bharatiya Janata Party (BJP), along with its predecessor incarnations, have for decades called for the revocation of Kashmir’s special status. Why should India’s only Muslim-majority state, they fulminated, enjoy special privileges in a Hindu-majority country? By fully integrating Kashmir into India, the Hindu nationalists would be able to extinguish Kashmir’s unique character, overwhelming it with Hindu demographic and economic dominance.

This has not been an especially hidden agenda. The abrogation of Articles 370 and 35A were plainly and prominently listed in the BJP’s 2014 and 2019 election manifestos. In both elections, the BJP’s main electoral message was carefully crafted to appeal to the widest possible cross-section of Indians, focusing on issues like economic reforms and national security. But the party’s chief ideologues—like the current Minister for Home Affairs Amit Shah and the party’s National General Secretary Ram Madhav—knew that the promise of revoking Kashmir’s special status, along with other symbols of Hindu rejuvenation, would help to energize the grassroots Hindu-nationalist base.

In Modi’s first term in office (2014–2019), the government portrayed India—especially to international audiences—as a dynamic economy and responsible international actor. At home, it set about “saffronizing” public institutions and turning a blind eye to vigilante violence against Muslim and lower-caste minorities. With a thumping re-election win earlier this year, critics see the latest Kashmir policy as the next step in this Hindutva agenda.

Opposition to the Kashmir policy has been inflamed by its heavy-handed implementation. The government abrogated Articles 370 and 35A through a series of constitutional gymnastics that make the move legally dubious—and there is a good chance opponents will challenge it through the courts. Worse, it was executed with brute force, under cover of a statewide curfew and the watchful eye of a significantly-reinforced paramilitary presence. Local political leaders were placed under indefinite house arrest, phone and internet communications completely cut off and transport severely curtailed. Some restrictions have since been lifted, but Kashmir remains locked down by the central government, with a heavy security-force presence and increasing reports of human rights abuses. In the Vale of Kashmir—its demographic and political center, including the capital, Srinagar—the population, by most accounts, is seething.

This policy shift, however, will reverberate far beyond the valley. Indeed, Modi’s government was very likely motivated by the promise of advancing not only their nationalist program but also their grand strategy of redefining India’s position in the region.

For New Delhi, a rising India should be a peer of China, rather than a disputant of Pakistan. The time has come, from this point of view, for India to stop squandering its energies on the competition with its third-rate, failing neighbor. India’s economy is already ten times the size of Pakistan, and the gap is growing. India has global interests, is courted by major powers like the United States and Japan, and is seen around the region as an indispensable counterweight to China.

In this context, Modi’s policy on Pakistan is to make its neighbor irrelevant to a rising India. His initial efforts to engage Pakistan during his first term in office were not only rebuffed but lead to a spate of attacks and escalating artillery duels across the Line of Control. Modi and his advisers concluded that a wholly new approach was in order. India not only responded to Pakistan-based terrorist attacks with conventional military strikes in 2016 and February 2019 but focused its diplomatic efforts on isolating Pakistan internationally.

The new Kashmir policy is consistent with that broader approach to Pakistan. By ending Kashmir’s special status and making it a permanent and integrated union territory, India has unilaterally taken Kashmir off the table as a matter of political dispute with Pakistan. The two neighbors have fought three wars over Kashmir and engaged in innumerable rounds of inconclusive diplomatic talks over it. India has sought to ratify the territorial status quo at least since the 1960s, while Pakistan has sought to “internationalize” the dispute, hoping that third parties could pressure India to negotiate. That Pakistani core objective, of revising the status of the disputed territory, is now all but unreachable. As far as New Delhi is concerned, Kashmir’s status is no longer unresolved, and India and Pakistan have nothing to discuss except Pakistan’s continued strategy of supporting cross-border terrorism.

Indeed, India has gone even further to undermine Pakistani policy by renewing its claims on Pakistan-controlled Kashmir. The revocation of Kashmir’s autonomy was accompanied by a disciplined messaging campaign, with several Indian cabinet members, including the Home Minister Shah and External Affairs Minister S. Jaishankar, declaring India’s intent to eventually reclaim Pakistan-controlled Kashmir. These assertions do not portend an Indian military attack, but they do suggest an Indian attempt to reset the international narrative on Kashmir—that Kashmir is occupied and disputed on the Pakistani side, not the Indian. Modi’s government is projecting an image of a “new India” that is whole and rising and unperturbed by yesterday’s conflicts.

Even if this is India’s strategic rationale, will it succeed in this endeavor? There are significant reasons to doubt the efficacy of this strategy. At the outset, within the past few years, there has been a qualitative change in the insurgency in Kashmir. Contrary to its public protestations, Pakistan has evinced little or no interest in tamping down its support for several anti-Indian terrorist organizations ranging from the Jaish-e-Mohammed (JeM) to the Lashkar-e-Taiba (LeT). Media reports suggest that, after an unusual months-long lull over the summer, terrorists have again begun to infiltrate over the Line of Control into Indian-controlled Kashmir.

That said, to the surprise of Indian policymakers a new generation of native Kashmiris have entered the fray. This was more than evident from the outpouring of public support that ensued in the wake of the killing of Burhan Wani, a young Kashmiri militant in July 2016, who had a substantial following on social media. Furthermore, it needs to be underscored that while the JeM claimed responsibility for the suicide attack on an Indian paramilitary convoy in February of this year, the actual perpetrator was a young Kashmiri.

It hardly requires a great leap of imagination to visualize that, after the Indian authorities continue to lift the existing restrictions on movement and communications, the pent-up anger will boil over into the streets and alleys of the towns in the Kashmir Valley. As public protests ensue it is entirely reasonable to surmise that Pakistan, which remains unreconciled to India’s actions, will find ways to foment further discord through the provision of money, organization and weaponry. Pakistan-supported terrorist networks are already preparing to redouble their efforts in Kashmir.

Modi and his advisers have undertaken a bold but risky gambit. Their policy shift will result in a resurgence of local discontentment and militancy—which they all but acknowledge with their security reinforcements. Pakistan is unlikely to relinquish its irredentist claims on Kashmir but has few policy instruments available beyond inflaming that militancy. Even if Modi’s government succeeds in rendering Pakistan politically irrelevant, it will require some highly imaginative policies beyond recourse to coercion to drain the reservoir of discontent that seethes in the Kashmir Valley.

Sumit Ganguly is a Distinguished Professor of Political Science at Indiana University, Bloomington. Arzan Tarapore is a Non-Resident Fellow at the National Bureau of Asian Research in Washington DC.