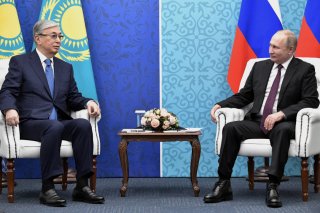 Protests initiated by the raising of liquified petroleum gas prices in western Kazakhstan on January 2-3 precipitated a week of nationwide unrest and violence that resulted in the deaths of at least 160 people and the arrests of thousands.

Declaring a state of emergency, President Kassym-Jomart Tokayev called the unrest a “terrorist attack” on the country’s national security and requested aid from the Collective Security Treaty Organization (CSTO)—a military alliance comprised of Russia, Kazakhstan, Belarus, Armenia, Kyrgyzstan, and Tajikistan. The CSTO responded positively to Tokayev’s request and deployed 2,500 “peacekeepers” to the country on January 6 on the basis of Article 4 of the group’s charter, which codifies the alliance’s principle of collective defense.

That Russia provided the bulk of the 2,500 CSTO peacekeepers and that there was, in fact, no evidence of “an armed attack threatening safety, stability, territorial integrity and sovereignty” on Kazakhstan led to suggestions that the CSTO’s intervention was simply an example of Moscow’s “Ukraine playbook” in action.

However, such analysis ignores two major factors: the domestic political context of Kazakhstan’s unrest and the dynamics of the country’s geopolitical environment.

Since Kazakhstan’s independence in 1991, the country’s domestic political scene has been dominated by its former president, Nursultan Nazarbayev, who Tokayev recently removed from the country’s Security Council. Nazarbayev ruled without any major challenge until 2019, when he stage-managed the appointment of his hand-picked successor and current president, Tokayev. Despite this leadership transition, Nazarbayev continued to wield considerable power and influence through his chairmanship of the Security Council of the Republic of Kazakhstan.

Under Nazarbayev, Kazakhstan was long considered by Western observers to be the most stable and successful of the post-Soviet Central Asian republics. Such “stability” was based on Nazarbayev’s “economics first, politics later” approach whereby his government privileged economic development (largely based on the exploitation of the country’s vast hydrocarbon resources) over the consolidation of genuine democratic institutions and norms. Although Nazarbayev’s regime was not a brutal dictatorship, it was nonetheless illiberal and authoritarian. A 2019 Chatham House report notes that, in Kazakhstan, “a wide range of political rights and freedoms are effectively non-existent” including “political plurality; media freedom; freedom of assembly; the freedom of civil society to operate without pressure, intimidation or official consent; and freedom of association for trade unions and political parties other than the ruling Nur Otan party.”

Furthermore, while Kazakhstan experienced significant economic development, it was very unevenly spread, with 0.001 percent of Kazakhs owning 55 percent of the country’s wealth. Nazarbayev, in particular, utilized the country’s resource wealth to establish a system of patronage that consolidated loyal elite networks to undergird his nearly three-decade grip on power. Hand-in-hand with this has been endemic corruption. As another more recent report by Chatham House has detailed, Nazarbayev and his daughters, son-in-law, nephew, and grandson stand at the center of colossal corruption and money-laundering activities that have funneled billions of dollars of the country’s wealth into offshore banks and assets. This neo-patrimonial system of rule has provoked prior instances of sporadic opposition to the regime—such as the Zhanaozen protests in 2011—but the half-hearted leadership transition now appears to have stoked popular anger and disaffection to unprecedented levels. That Nazarbayev was the prime target of popular anger was illustrated by the fact that protestors around the country chanted “Shal, ket!” (“old man, out!”).

Adding further to this combustible material has been the evident intra-elite contestation over the past year as Tokayev consolidated his position by establishing patronage networks not reliant on Nazarbayev’s imprimatur. These efforts appear to have also played into the recent unrest with Tokayev arresting Karim Massimov, a close Nazarbayev loyalist, former prime minister, and head of Kazakhstan’s state security services, for committing “treason.” Seasoned Kazakhstan watcher Joanna Lillis has noted that this could point to the possibility Massimov “was involved in a bid to topple Tokayev and seize power.” A former adviser to Nazarbayev, Yermukhamet Yertysbayev, subsequently lent further credence to this theory when he stated that such a “coup d’état” could not have been carried out without “traitors in the highest echelons of power, especially in law enforcement agencies.”

Tokayev thus appears to be confronted with the convergence of popular anger at the lack of the reform of the Nazarbayev system and elite fracturing. This has prompted a convoluted narrative from Tokayev about the unrest, with the president asserting on January 10 that there was coordination between “foreign terrorists” and elements within the country’s security services as “evidenced by the synchronous attack on the headquarters of regional authorities, law enforcement agencies, pre-trial detention centers, strategic facilities, banks” as well as major airports being “seized” and “roads and railways blocked.”

While the basis for the “foreign terrorists” claim appears farcical, it appears that some of the violence was instigated by armed provocateurs associated with a number of Kazakh criminal gangs potentially in the pay of Tokayev’s internal regime opponents. It is in this context that Tokayev’s request for CSTO intervention makes some sense. As Paul Stronski of the Carnegie Endowment for International Peace observes, “a clue to what really motivated that request is that, immediately after the violence began, Tokayev moved to replace key security officials with loyalists of his own. That suggests he did not trust the country’s security forces and may have sought Russian assistance to outmaneuver his rivals in the regime.”

That an intra-elite struggle has taken place now appears clear, although its exact relationship to popular unrest remains obscured. In an address to the Kazakh parliament on January 11, Tokayev not only sought to consolidate his narrative that a “coup” had been attempted by internal opponents in collusion with “armed terrorists, including foreign militants” but also openly criticized Nazarbayev for establishing a system that “separated” the political elite from the “difficult realities and needs of citizens” and favored “financial and oligarchic groups.” In an unprecedented swipe at the Nazarbayev, Tokayev lambasted this system as being based “on the principle: ‘everything to friends, to the rest - according to the law.’”

Thus, rather than Russia opportunistically taking advantage of the crisis in Kazakhstan, it appears that Tokayev may have played on the Kremlin’s status quo preferences in Central Asia to induce it to come to his aid. “The CSTO presence,” Mark Galeotti suggests “was a token of support for Tokayev to encourage the rest of the Kazakh elite, and especially the security forces, to line up behind him” in the interests of “stability.” Given that the intervention is also set to be extremely brief it will constitute “an easy win for the Kremlin” as it can be presented “as a foreign policy achievement to domestic and international audiences” and used to “silence criticism of the CSTO as well as enhance Russia’s standing as a dependable ally.”

The convergence of Russian and Chinese interests here is also notable.

“Stability,” in fact, is the watchword for both Moscow and Beijing as far as Kazakhstan is concerned; Both “want a stable country that is in their collective economic and military thrall, and ideally with looser ties to the West.” China’s official response—reiterating Beijing’s opposition to the “undermining of Kazakhstan’s stability” and praising Tokayev for “decisive and effective actions” against a “color revolution”—underscores that it has no strong preference for a particular leader in the country’s intra-elite struggle so “long as someone is in charge” who it can work with and that whatever change does take place does not threaten the basis of Sino-Kazakhstan relations. The fact that CSTO intervention was explicitly invited by Tokayev rather than driven by Russian adventurism and has a clear endpoint has also contributed to Beijing’s nonchalant official response to events.

For Moscow and Beijing, supporting Tokayev is thus not only prudent given Russia’s long-standing ties to the country and China’s extensive economic relationship and investments there, but may offer future gratitude from the leader of Central Asia’s most developed economy. While some have speculated that Tokayev’s reliance on the Russian-led CSTO to prop up his position could undo Kazakhstan’s long-standing “multi-vector” foreign policy in favor of greater alignment with the Kremlin, both the consolidation of strong Kazakh nationalist sentiment and the realities of Kazakhstan’s geopolitical position would tend to balance against this risk.

Dr. Michael Clarke is a Senior Fellow at the Centre for Defence Research, Australian Defence College, and Visiting Fellow at the Australia-China Relations Institute, UTS.