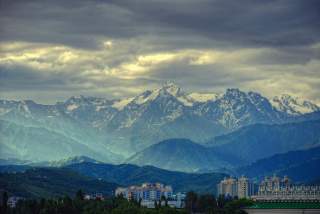 Change is in the offing for Kazakhstan, the powerhouse of Central Asia. President Nursultan Nazarbayev is now promising more scope for political life and economic opportunity. But if reforms lag or the West abandons Ukraine, Kazakhstan may face a more challenging future.

Nazarbayev, the only remaining post-Soviet leader to have been in power when the Soviet Union collapsed in 1991, is proposing to “redistribute power.” The declared aim is to improve public administration and “democratize” politics. Allowing open discussion of the country’s political future would be a big change. Under the reforms, the president would continue to manage foreign policy and security, and be the government’s “supreme arbiter.” Parliament would choose ministers and have a greater role in managing social and economic matters, a mixed blessing since strains may develop as budgets tighten.

Devolving power is prudent. The death last year of Uzbekistan’s seventy-eight-year-old president, Islam Karimov, has brought into sharper relief the absence of a clear successor to Nazarbayev, seventy-five. But Kazakhstan is not short on experienced leaders. For example, ambassador to Russia Imangali Tasmagambetov (sixty) has been prime minister, defense minister, and mayor of Astana and Almaty, and Karim Massimov (fifty-one), an ethnic Uyghur, heads the security service and has led the presidential administration and served twice as prime minister. Nazarbayev might seek to elevate his daughter, Dariga (fifty-three), a senator and former deputy prime minister.

Nazarbayev has created an enviable economic legacy. Per capita GDP in 2015, by purchasing power parity, was $25,045, edging out Russia’s and four times higher than Uzbekistan’s. Energy, minerals and economic reforms underlie the success. Kazakhstan has the ninth-largest proven oil reserves in the world. Western companies—such as Chevron, ExxonMobil, BP, Shell, Total and Eni—help make the country a global energy player. Maintaining an open investment climate is critical, as are gains in the rule of law, including an independent judiciary.

Kazakhstan is a leader in other domains. It hosts a low-enriched-uranium fuel bank, owned by the International Atomic Energy Agency. The bank is a supplier of last resort, thus discouraging the proliferation of sensitive enrichment plants. Kazakhstan was the first post-Soviet state to chair the Organization for Security and Cooperation in Europe. It is a nonpermanent member of the United Nations Security Council. Proposed by Nazarbayev in 1992, the Conference on Interaction and Confidence-Building Measures in Asia has twenty-six members, ranging from China and Russia to Israel and Egypt.

Yet Kazakhstan’s challenges are daunting. Income inequality is wide, including across regions. The country languishes a quarter from the bottom of Transparency International’s global index of corruption perceptions. In the World Economic Forum’s 2016–17 index of competitiveness, Kazakhstan does better, ranking fifty-third out of 138 countries. Ambitious plans to privatize more of the state-dominated economy have stalled. Unless oil prices rebound, overcoming such structural barriers will be vital to return the economy to faster rates of growth.

Although institutions are weak, Kazakhstan benefits from moderate traditions. Rule is mildly authoritarian. Society is somewhat ethnically tolerant, important since nearly a quarter of the population is Slav. Kazakhstan has good ties with its neighbors; by exporting oil through Russia and to China, Kazakhstan balances ties with both countries. Chinese investment in transportation across Kazakhstan and Russia—a modernized Silk Road—fosters cooperation among all three.

Kazakhstan benefits if China, Russia and the West have good relations. If Russia were to resist China’s fast-growing economic power in Central Asia, it could be squeezed. Astana encourages U.S.-Russian cooperation, and values Western links as a hedge against Eurasian risks and a source of investment.

Were America to pursue triangular diplomacy with Russia aimed against China, this would put Kazakhstan’s position at risk. But the strategy would likely fail. Russian and Chinese leaders oppose Western liberalism, and favor spheres of influence, as in Ukraine and the East China Sea.

Kazakhstan is anxious that the West stick to its principles in Ukraine. If America were to lift economic sanctions on Russia without an end to its war in eastern Ukraine, Kazakhstan would worry that the West was ceding to Moscow a coercive sphere of influence.

Astana worries about a Western loss of interest as NATO’s role in Afghanistan ebbs. This could leave Kazakhstan more exposed to a flow northward of violent extremists and narcotics.

William Courtney was the first U.S. ambassador to Kazakhstan, 1992–95, and is president of the U.S.-Kazakhstan Business Association. He was also ambassador to Georgia and to the U.S.-Soviet commission that implemented the Threshold Test Ban Treaty.