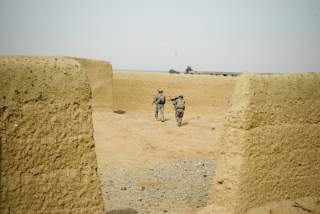 We are writing, as Americans committed to the success of our country’s Afghanistan mission, to urge that you sustain the current level of U.S. forces in Afghanistan through the remainder of your term. Aid levels and diplomatic energies should similarly be preserved without reduction. Unless emergency conditions require consideration of a modest increase, we would strongly favor a freeze at the level of roughly ten thousand U.S. troops through January 20. This approach would also allow your successor to assess the situation for herself or himself and make further adjustments accordingly.

The broader Middle East is roiled in conflicts that pit moderate and progressive forces against those of violent extremists. As we saw on 9/11 and in the recent attacks in Paris, San Bernardino and Brussels, the problems of the Middle East do not remain contained within the Middle East. Afghanistan is the place where Al Qaeda and affiliates first planned the 9/11 attacks and a place where they continue to operate—and is thus important in the broader effort to defeat the global extremist movement today. It is a place where Al Qaeda and ISIS still have modest footprints that could be expanded if a security vacuum developed. If Afghanistan were to revert to the chaos of the 1990s, millions of refugees would again seek shelter in neighboring countries and overseas, dramatically intensifying the severe challenges already faced in Europe and beyond.

In the long-term struggle against violent extremists, the United States above all needs allies—not only to fight a common enemy, but also to create a positive vision for the peoples of the region. Today, aided by the bipartisan policies of the last two U.S. administrations, Afghans have established a democratic political system, moderately effective security forces, a much improved quality of life, and a vibrant civil society. Afghans are fighting and dying for their country, and in our common battle against extremism, with more than five thousand police and soldiers laying down their lives annually each of the past several years.

Afghanistan is a place where we should wish to consolidate and lock down our provisional progress into something of a more lasting asset. It is a Muslim country where most of the public as well as government officials want our help and value our friendship. Afghanistan is also a crucial partner in helping to shape the calculations of Pakistan, which has been an incubator of violent extremism but which might gradually be induced to cooperate in building a regional order conducive to peace and economic progress.

You have rightly prioritized Afghanistan throughout your presidency and have successfully achieved several crucial objectives. You have prevented the reemergence of a terrorist sanctuary in Afghanistan, from which attacks on Americans might emanate. You have helped Afghanistan develop security forces so that it is principally Afghans who are defending Afghanistan, thereby enabling a 90 percent reduction in the U.S. military presence relative to its peak (and a two-thirds reduction relative to what you inherited in 2009). You have established a long-term strategic partnership with Afghanistan that can address common threats from extremist groups based in Pakistan. To our minds, these are significant accomplishments. They have established much of the foundation for pursuing the ultimate goals of stabilizing Afghanistan and defeating extremism in the region.

To be sure, there have been significant frustrations in Afghanistan along the way. All of us have lived and experienced a number of them. All of us have, like you, deeply lamented the loss of each American life that has been sacrificed there in pursuit of our mission objectives and our national security.

Yet, though the situation is fraught, we have reason to be confident. President Ghani, Chief Executive Abdullah, and many brave Afghans are working hard to rebuild their country. NATO allies and other partners remain committed to the mission. The level of support we must provide to enable continued progress is much lower than in earlier periods.

Our group is taking full stock of the situation in Afghanistan and will make a broader range of recommendations available to the next U.S. president on the interrelated subjects of governance, the economy, and security. But as an interim measure, and with the NATO Warsaw summit as well as other key decision points still looming on your watch, we urge you to maintain the current U.S. troop strength in Afghanistan through the end of your term. Based on longstanding experience in the country as well as recent trips to Afghanistan by some of us, this step would be seen as a positive reaffirmation of America’s commitment to that nation, its people and its security. It would likely have helpful effects on refugee flows, the confidence of the Taliban, the morale of the Afghan military and Afghan people, the state of the Afghan economy and perhaps even the strategic assessments of some in Pakistan. Conversely, we are convinced that a reduction of our military and financial support over the coming months would negatively affect each of these.