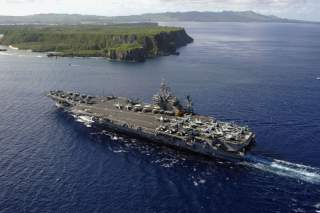 Joint warfare as a national way of war has become deeply ingrained in U.S. strategic thinking since the Goldwater-Nichols Act of 1986. Within the command structure of the various regional U.S. Combatant Commands, the Navy, Air Force, Army and Marines have become hardwired to fight joint military operations around the world. Over the last thirty years, it is an approach that has yielded impressive conventional war results in Operation Desert Storm, in the Balkans, and in the opening months of Operation Iraqi Freedom. However, in the Far East, the United States is increasingly faced with a conundrum in which the U.S. propensity for joint warfighting sharply increases the risk of escalation and widening war.

The basis of much American striking power is its commitment to a way of war that relies in large part on relatively short-range land- and sea-based tactical aircraft that “bed down” close to the enemy and fly in to deliver relatively short-range ordnance. In the Far East, the U.S. stages nearly all of its land-based air power forward in a small number of bases on Japanese territory and Guam. These bases, which were once a sanctuary for the U.S., are now at risk as China increases its precision cruise and ballistic missile range to encompass all current U.S. bases in the region. This opens the possibility that a local conflict with China might quickly escalate into a regional (or even global) conflict, because so much of the United States’ strike capability in the region is concentrated either on foreign soil or on U.S. territory that is well within the range of China’s growing arsenal of ballistic and cruise missiles. The operational risks and implications—possible destruction of a significant portion of U.S. air capabilities in-theater—are clear, but the escalatory implications have been less well-considered.

Kadena Air Base in Okinawa, Japan, Andersen Air Base in Guam and Iwakuni Marine Corps Air Station (MCAS) in Japan are the three most important land basing options for U.S. military aircraft in the Far East. Kadena and Andersen are two of the largest U.S. Air Force bases on Earth, and provide the U.S. with significant basing and air power projection in the Far East. E-3 AWACS planes, KC-135 Stratotankers and F-15 Eagle and F-22 Raptor fighters regularly rotate through Kadena, and MCAS Iwakuni hosts a significant contingent of Marine Corps F-18 Super Hornets, F-35B Lightning Joint Strike Fighters and a variety of support aircraft that likewise rotate from home bases in the United States. Their ability to house and project power in the region is significant.

Andersen Air Force Base on Guam is equally important, but located as it is on a U.S. territory, it presents an even more worrying problem. Andersen, along with Diego Garcia in the Indian Ocean, is a forward operating base for the Air Force bomber fleet, providing essential strike and logistics support for operational aircraft in a Far East military conflict. B-52s, B-1Bs and B-2s, often parked wingtip-to-wingtip, all frequently operate out of Andersen. Furthermore, the air base is home to special mission tanker and intelligence, surveillance and reconnaissance aircraft, as well as F-22, F-16 and F-15 fighter aircraft.

Clearly these bases, perhaps even currently unused Clark Air Base in the Philippines, would become a centerpiece in any high-intensity conflict with China in the Far East. In addition to the strike power at these bases, E-3 AWACS planes are indispensable airborne assets for early warning and combat command and control, integrating air combat operations at a level unmatched by any other nation in the world. KC-135 tankers extend the reach of otherwise limited-range fighter aircraft, allowing them to extend their combat radius over the Spratly Islands in the South China Sea, as well as extend their on-station time in a potential Taiwan conflict. Finally, forward-basing strategic bombing assets allows for a much higher sortie rate and a much smaller logistical tail to support bombing operations. For joint war fighting, the use of these bases to project force is vitally important.

However, it is the concentrated nature of this force that makes Andersen, Kadena and Iwakuni such a tempting target, and therefore raises the risk of escalation. The more reliant the U.S. is on Guam, Kadena, Iwakuni and perhaps even Clark, the greater the temptation for the PRC to strike at the U.S. center of gravity, inflicting potentially enormous damage on American aircraft and drastically increasing the risk of widening a local conflict over Taiwan or the Spratlys into a broader regional conflict, pulling in other nations and significantly increasing the risk of escalation between the U.S. and China.

For example, a sustained combat air campaign over Taiwan or the South China Sea originating from these bases is very likely to force China to attack those bases with cruise missiles or ballistic missiles. Given the excellent tactical capabilities of these aircraft, the PRC is likely to conclude that the only way to defeat them is on the ground. This is especially true in a conflict in the South China Sea, where distance and shortage of basing for forward-deployed aircraft (despite new runways on Fiery Cross and Subi Reefs) make it critical for the PRC to find another way to defeat U.S. air operations.

Okinawa and Guam are within the range of the PRC’s large and sophisticated ballistic missile force, as well as mainland-based H-6K medium-range bombers equipped with CJ-20 land attack cruise missiles. A recent study by the Rand Corporation indicated that thirty-six ballistic missiles would be enough to successfully suspend fighter operations at Kadena for four days, and tanker operations for over eleven days. MCAS Iwakuni would probably receive about half the number of attacks. The problem is even worse, however. According to Jane’s IHS, there are more than enough of both ballistic and cruise missiles in the PRC inventory to keep Kadena and Iwakuni closed for weeks, if not a month or more. This is to say nothing of the certain destruction of U.S. aircraft lined up in parking areas and hangars.

A sustained missile campaign against the Japanese archipelago would make it extremely difficult for Japan to stay out of any conflict. Even if Japan initially elected to stay on the sidelines of a conflict over Taiwan or the South China Sea between the U.S. and China, it is reasonable to expect that the Japanese government would enter the war after a major strike either on its mainland or on Okinawa. A contained local conflict would quickly become a widening regional conflict, with all of the potential consequences of such horizontal escalation.

An attack on Andersen is even more fraught with escalatory danger. Despite the evident risks of reprisal from the U.S., the temptation to cripple a major Air Force hub may be too much to resist. For the PRC, the operational benefit would be enormous, but the escalatory risks are equally large. In order to reopen Andersen, to say nothing of the political pressure to exact revenge for an attack on a U.S. territory, the United States could be forced to strike the launch sites and airfields on the Chinese mainland.

This is not to suggest that the Air Force pull up stakes and go home. On the contrary, Air Force assets are absolutely indispensable to U.S. military power in the region. Instead there are other options that would help mitigate the possibility of escalation, though they would not eliminate it entirely. Even so, while they may reduce the likelihood of base attacks and therefore activation of the escalatory tripwire, these approaches may also impact the Navy’s and Air Force’s ability to generate force in both in the theater and in other parts of the world. As with most of these issues, there are tradeoffs.

An important option that the Pentagon has been pursuing since at least 2014 is adopting a dispersed basing posture in the Far East. Happily, the 2014 Quadrennial Defense Review has noted that “the department will enhance capabilities to disperse land-based and naval expeditionary forces to other bases and operating sites, providing the ability to operate and maintain front-line combat aircraft from austere bases while only using a small complement of logistical and support personnel and equipment.” Greater dispersal of Air Force combat aircraft changes the risk-benefit calculus for the PRC, because the potential cost of escalation may not be worth the gain of attacking airfields containing relatively few U.S. assets. Furthermore, while the PRC has enough missile inventory to shut down as many as two or three airfields for an extended time, it still lacks the numbers of missiles to close down between six to twelve bases for an extended time.

Given the common security interests they share with the U.S., Japan and the Philippines, with their well-developed infrastructure including many of the 5,000-to-10,000-foot runways necessary to accommodate U.S. warplanes, are the most promising potential for dispersed basing. It may also be possible for the United States to consider opening or expanding bases in Saipan, Tinian and Rota, which lie beyond Chinese IRMB range.

Secondly, the Air Force long-range strategic aircraft, such as B1-B, the B-2 and the B-52 bombers, project immense conventional firepower over massive ranges. They could be employed to attack land targets in any local contingency in Taiwan, the Senkakus and the Spratlys from sanctuary bases inside the continental United States. However, use of these strategic assets is not without risk, and raises the possibility of potential PRC attacks against targets in the continental United States. In this case, however, the logic of deterrence prevails, as the PRC, which has historically been adept at ensuring its own survival and at calibrating its actions to avoid overwhelming military responses from its rivals, recognizes that any attack against the continental U.S. would incur a military cost that China is unable to bear. In short, restricting U.S. strategic bomber attacks to areas outside the Chinese mainland could conceivably cap escalation of any potential conflict.