Keeping the Cold War with China from Turning Hot 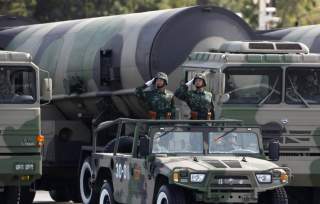 As a hot summer of Iran debate heats up the nation’s capital, one may be at least slightly reassured that President Donald Trump has exercised some measure of restraint—albeit belatedly. Yet, the President’s reasoning, that the proposed strikes would have cost an estimated 150 casualties, implies a misunderstanding regarding the uncertain nature of war and its inherent risks.

Putting aside for now the tortured story that brought us to this precarious point since withdrawing from the Iran nuclear accord, Trump’s assumption that America’s military and intelligence leaders can estimate with great precision when an armed conflict will end or how it will end implies a shocking lack of humility. To be fair, that’s a depressingly common trait amongst the Washington “blob.” More than half a century of problematic calculations on this score absolutely underline the case for restraint. By the way, this mostly unfortunate history also implies that our forefathers were both wiser and much more circumspect regarding the use of force, since they unambiguously placed the war powers squarely with the legislature, rather than the executive.

What is even more troubling, however, is that while such hawkish “shenanigans” in the Middle East are not likely to change anytime soon, the same tendencies are at work in today’s great power rivalries, but the impact could be catastrophic, particularly as one considers the consequences for the nuclear strategy calculus. It is well known that the edifice of arms control, which did a reasonable job of mitigating great power rivalry in the past, has been crumbling now for more than a decade. A couple of recent articles in the Chinese military press focusing on tactical nuclear weaponry offer a glimpse of the perilous world to come, if these trends are not reversed in the near term.

Not surprisingly and in keeping with the winds of the New Cold War, the PLA Daily [解放军报] in mid-June ran a strident critique of recent Pentagon decisions to upgrade the U.S. tactical nuclear force capabilities under the not so polite headline: “By developing a full-scale deterrent, the U.S. will become a ‘coward’ who is more likely to launch a nuclear strike. Why tactical nuclear weapons are ‘favored’ in the U.S. [发展全谱威慑手段，美将成为更容易发动核打击的‘莽夫’: 战术核武器缘何在美‘受宠’].”

The article reviews some important history, noting that the “elder Bush [老布什]” took the historic step after the end of the Cold War of vastly decreasing the American tactical nuclear arsenal. This PLA Daily article notes that the number of U.S. tactical nuclear weapons fell 90 percent from 1991 to 2010, according to American sources. It is explained that the Obama administration sought to make tactical nuclear weapons a theme of future nuclear arms reductions, but the advent of the Trump administration signified that “the wind direction was changing [风向发生了改变].”

It is reported that the United States has already begun producing the new W-76-2 low-yield warhead and that it could reach initial operating capability with the U.S. Navy already in 2019. It is assessed that such weapons “will lower the nuclear threshold [会降低核战门槛],” due in part to the lesser destructive yields and “also the lighter moral pressure [道义压力也较轻].” “At the same time, it is often difficult for opponents to distinguish whether the attacking platform is equipped with tactical or strategic nuclear weapons, which may lead to an escalation of nuclear war,” the Chinese military analysis explains. The article concludes by addressing another rather obvious problem: “… if the United States re-develops tactical nuclear weapons … other countries may adopt the same approach of developing … their own nuclear forces when they feel that their security is more threatened.” That is a rather stark warning that should not be ignored.

Some further evidence, moreover, that Chinese military leaders have tactical nuclear weapons on their minds these days was a rather in-depth analysis published in Naval & Merchant Ships [舰船知识] in April 2019. While this article does make note of the ethical and environmental problems with such weapons, it disturbingly lays out a rather cogent case for tactical nuclear weapons in the naval context, noting that there is a “higher likelihood that they would be used in an actual battle [更可能在实际战场上被应用].”

The article discusses in some detail how difficult in practice it often proved to put important adversary ships on the bottom of the sea. Thus, the U.S. carrier Yorktown [约克城] suffered enormous damage at the battle of the Coral Sea but lived to fight another day at the crucial battle of Midway. Similarly, the massive effort by the Royal Navy to sink the Bismarck [俾斯麦] illustrates, for this Chinese naval analyst, “the limited power of conventional weaponry [常规武器的威力限制].”

Then, the author moves to a discussion of U.S. nuclear tests and explains that these tests definitively prove that “air burst nuclear weapons … are far less effective than underwater nuclear explosions [空爆核武器远低于水下核爆炸” in terms of destructive value. Such weapons, moreover, can not only be used to target both surface ships and submarines, but “can assure damage even if the strike is not precisely on target …” and even destroy whole ship squadrons or groups with one blow. Thus, such weapons can both destroy substantial segments of enemy forces and, “moreover, produce major psychological deterrence and assault blows, successfully pressuring and even destroying the enemy’s morale to the point of paralyzing the enemy’s entire combat system [而且会产生巨大的心里威慑和冲击, 成功压制甚至毁灭敌方士气, 甚至在短时间内瘫痪敌整个作战体系].”

It should not be necessary here to rehearse all the reasons why tactical nuclear weapons are the road to perdition: blurring lines that should not be blurred, exaggerating preemptive strike temptations, creating further “use’m or lose’m” dilemmas, and on and on. Most of these tendencies could be readily seen in the archetypal great power showdown, the Cuban Missile Crisis. Indeed, the next crisis in the South China Sea or over Taiwan could easily see Washington “eyeball to eyeball” with Beijing in short order in scenarios fraught with nuclear overtones. Instead of stoking the “New Cold War” with tactical nuclear weapons, we should be doing all we can to ensure that these dangerous weapons do not again “become pervasive [普及化]” in the regrettably accelerating U.S.-China military rivalry.