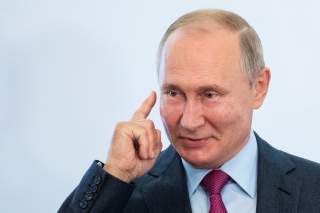 Let me put it right out there: I believe we Americans have misunderstood  -- or, as George Bush might have said, “misunderestimated” -- Vladimir Putin from the moment he entered our consciousness, at the very start of the present millennium.  Here is how I remember him and what I think of where we are today.

Putin was my guest at a July 4th reception in St. Petersburg in 1995, when I was serving as the U.S. Consul General there. I recall taking him into my library. We spoke Russian in those days, before he began to learn English.  His wife, still recovering from a bad automobile accident, did not accompany him. On that occasion, he was representing his boss, Mayor Anatoly Sobchak, who was off on a trip.  Of course, I hadn’t the faintest idea that this man was destined to become the President of the Russian Federation--and neither did he.

It seems hundreds of books have been written about Putin, and thousands of articles. More are coming, and each of them will attempt to shed some additional light on this remarkable man, who has risen from humble beginnings to lead one of the world’s great nations, and has now, at the relatively young age of 66, broken the (post-Stalin) record set by Leonid Brezhnev for doing so. If I had had any idea in the mid-nineties that my guest would one day become Russia’s leader, I would have had him over to lunch, to say the least.  But I didn’t, and I am just as glad, because it would have altered the dynamic. We were simply colleagues then.

On one occasion I called Putin for help when some young American investors from California who had set up a Subway fast-food restaurant with Russian partners arrived at the Consulate General pursued by the mob. The Russian side of the 50-50 venture had learned how to make sandwiches and had called in “muscle” from the criminal world in order to evict the Americans and take over the business. I called Putin for assistance. His first reaction was to say that he needed a copy of the contract.  He also assured me that he would order the mob to back off so that our citizens could safely make it to Helsinki, as they feared for their physical safety. The matter would then need to go to court (which it eventually did). That was what Petersburg was like in the 1990s. Some called it the Wild East. I was struck at the time by Putin’s immediate reaction in wanting to see the contract.  It was the reaction of one trained in law, as Putin had been, and intent on seeing that the matter was resolved in accordance with the law.

Putin is what Russians call a “gosudarstvennik,” a man of the state. He is not motivated primarily by money, although St. Petersburg friends of ours acknowledge that he has not failed to take advantage of opportunities that have come his way. When I and other Americans in St. Petersburg knew Putin, he had the reputation as the only bureaucrat in the city who did not take bribes (this is an exaggeration; there were others).   He was well regarded on the whole, and devoted to his mentor and then-boss, Sobchak, one of the great democrats of the new Russia. A former law professor, Sobchak was a fine writer and orator, but not the most effective manager. Putin largely ran the day-to-day operations of the city, and was credited with bringing some order into the chaotic crime-ridden business world. As Russians said in those days, “if you have crime, isn’t it better that it be organized?” I cannot recall Putin personally saying that, but he might have.

Unlike Yeltsin, Putin was never a heavy drinker. Nor was he a teetotaler. He would deliver a toast when required, which was often, and do it well. Toasts in Russia are a way of communicating, of showing respect, and of honoring people, especially on birthdays and career anniversaries or other milestones. Toasts are offered also (without clinking glasses) to the dead, and there were unfortunately many such occasions in St. Petersburg in the 1990s, not to mention the tragic memories of World War II, in which the city was besieged for 900 days, claiming members of Putin’s own family. The entire city and Consular Corps turns out without fail for the memorial to those who died in the Siege of Leningrad and lie in mass graves at the Pushkaryevskoe Cemetery.

Those of us who knew Putin in the 1990s recall that his formula for the recovery of Russia consisted of three elements: rebuilding the economy, dealing with the crime problem, and reforming the courts. That was a pretty good prescription for what ailed Russia at the time and is still a good basic recipe. Note that he was concerned exclusively with domestic problems: nothing about geopolitics here.

I am not going to attempt to prove it, but I assure you that Putin 1) was not anti-American (although he felt more comfortable with Germans); 2) was not a communist (at least by that time) or hostile to private business; 3) was not anti-Semitic; 4) and was not intolerant of gay people.  I have already noted that he had a legal bent. You may take my word for these assertions or not.  I have concrete examples to back each of them.

I should mention Putin’s favorite sport, judo. Photos of Mr. Putin engaging in this form of martial arts abound, as do theories purporting to explain him by reference to the sport, which is also called “sambo” in Russia.  I have been told that this is an acronym for “samo-oborona bez oruzhiya” (self-defense without weapons) but can not confirm this. Most Western analysts have focused on the fact the sport requires the player to use the strength and weight of his opponent to his own advantage.  That theory conveniently supports the contention that Putin has played Russia’s relatively weak hand well in dealing with stronger adversaries, but there is another aspect that is usually overlooked: the sport comes from the East, Japan, I believe.  Contestants prepare for combat in a friendly, collegial way. They bow to each other as a sign of respect before engaging, and again afterwards. It is a bloodless affair, almost courtly, with strict rules and formalities, although it does require real strength, agility, and skill. Putin has won numerous black belts.  But he is a good sport: memorably, he allowed himself to be thrown by a much younger opponent while visiting Japan. It also requires sobriety, flexibility, and self-control, qualities that Putin exhibits in abundance.

Much has been made of the fact that Putin started his professional life in the KGB, the Soviet Union’s dreaded intelligence service. Senator McCain once said that when he looked into Putin’s eyes he “saw K-G-B.” Well, maybe McCain did, although George Bush had a different reaction on his first meeting with Putin in Ljubljana in 2001. Prior to that meeting, as briefing memoranda were being prepared for the President about what to expect, I took advantage of my position at the time as Director of the section of the State Department’s Office of Intelligence and Research that covered the former Soviet Union and penned a two-page memorandum entitled “Vladimir Putin: A Heterodox View.” In it I tried to convey something of what I knew about Putin the man, as a counterweight to the other memos that derided him as a “provincial politician” and a “lightweight” who “wouldn’t last long.”  I sent the memo to the White House, to Secretary Powell’s office and to the CIA, but it was met by a deafening silence. Then one analyst called me from deep in the bowels of CIA at Langley and said, “John, thank you for writing that; we could never have gotten it cleared out of here.” My guess is that my memo landed in multiple shredders. Surely it never got anywhere near the President.  And yet, after that first meeting in Ljubljana, there were at least two people in the U.S. government who seemed to take Putin seriously: President Bush and me.

In the early 1990s, the Center for Strategic and International Studies in Washington reached out to Mayor Sobchak and set up what became known as the Kissinger-Sobchak Commission, intended to help Northwest Russia adjust to the new conditions. On one visit, Dr. Kissinger was introduced to Putin.  He asked him where he had gotten his start in life. Putin answered: “in foreign intelligence.” Dr. Kissinger reportedly quipped, “all the best people start off in foreign intelligence.” Of course, Kissinger had done exactly that with the U.S. Army in postwar Germany. Over the years Putin and Kissinger have kept up their acquaintance, meeting some twenty times.

The KGB, for all its fearsome reputation as repressor of free speech and jailer of dissidents, was viewed by the bulk of Soviet citizens as an elite service, especially after Yuriy Andropov came to power in the 1980s and began recruiting some of the “best and the brightest.” It was one of the few avenues for ambitious young men to see the world and have a challenging career. I have heard people in St. Petersburg say, “the KGB was our Harvard.”  Putin saw such service as both patriotic and personally advantageous and worked hard to qualify for it.