Khamenei's Plan to Manage Iran After His Death 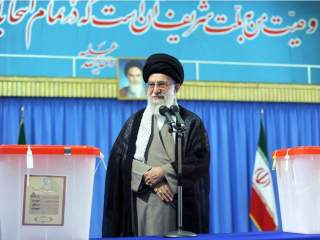 Last week the powerful Guardian Council—which approves all candidates for Iran’s political institutions—announced which contenders it had approved for the February election to the Assembly of Experts. The Assembly is itself an influential institution, in charge of choosing, supervising, and even deposing the supreme leader if necessary. The Council’s decision—approving just 161 of an original list of 794 candidates—poured cold water on hopes that last summer’s nuclear would result in a more moderate regime that could re-engage with the international community.

One hundred sixty-one candidates for eighty-eight seats means only 1.8 candidates per each seat. In other words, for some seats there is only one qualified candidate. Given Supreme Leader Ali Khamenei’s age and health, the current Assembly—whose members serve eight-year terms—will likely be the one to choose the next supreme leader. Khamenei wants to make sure he can control the selection process, and thereby continue to leave his imprint on the Islamic Republic even after his death.

The Assembly of Experts has never exercised its supervisory rights to depose the supreme leader or even supervise his rule. While it is the clerical members of the Guardian Council who decide who may run for the Assembly, it is the supreme leader himself who chooses who makes up the Council. It is unsurprising that the Guardian Council therefore disqualifies those candidates who take their supervisory role seriously.

This year’s election is the first one after the nuclear deal. The Obama administration has expressed hope that President Hassan Rouhani and his more pragmatist camp would be able to capitalize on their victory in getting the deal and its attendant sanctions relief. Western analysts had hoped Rouhani and his allies would ride that same momentum into the Assembly of Experts, choosing a less radical supreme leader to succeed Khamenei.

But while a two-thirds Assembly majority is required to choose the supreme leader, the more radical camp currently controls fifty-eight of its eighty-eight seats—in other words, the required two-thirds. And the radicals intend not only to keep that majority, but also to increase it.

Among the Assembly candidates disqualified was Hassan Khomeini, the grandson of Ruhollah Khomeini, the Islamic Republic’s late founder and first supreme leader. The disqualification of the younger Khomeini—who has issued mild criticism of hardline regime elements including ex-president Mahmoud Ahmadinejad—sent a message that even the purest revolutionary lineage is not necessarily enough to ensure selection to the Assembly.

In Tehran, the pragmatists do not have enough approve candidates to compete for all sixteen seats available, and were therefore forced—in no small irony—to recruit hardliners to their list. These include Mohammad Movahedi Kermani, the supreme leader’s former representative to the Islamic Revolutionary Guard Corps; Ghorbanali Dorri Najafabadi, a former intelligence minister believed to be responsible for a string of assassinations of intellectuals; and Mohammad Mohammadi Reyshahri, another ex-intel minister who oversaw the murder of thousands of political prisoners in the 1980s.

Iran’s political system is like a tent, one whose central pole is the supreme leader. As a result, the reform that so many within Iran and abroad seek can be successful only if initiated or supported by the supreme leader himself. By carefully managing the Assembly of Experts election, Khamenei is making sure no such thing will happen—even after his death.

Saeed Ghasseminejad is an associate fellow at Foundation for Defense of Democracies and its Center on Sanctions and Illicit Finance. Follow him on Twitter @SGhasseminejad.