Killing the INF Treaty was a Gift to Russia 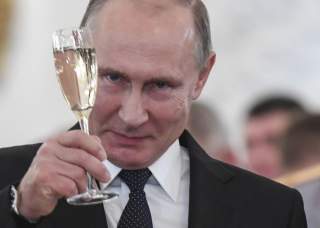 With his announcement that the United States is suspending compliance with and withdrawing from the 1987 Intermediate-Range Nuclear Forces (INF) Treaty, Secretary of State Mike Pompeo has sparked a fundamental debate about the future of arms control. The INF Treaty was at the heart of a new arms control regime created by the Reagan administration that helped lead to the end of the Cold War. Now, far from being the no-brainer the Trump administration is suggesting, the death of the treaty could easily harm rather than bolster U.S. and allied security.

The United States has claimed since 2013—and NATO allies, after being provided with evidence from Washington, concur—that Russia illegally tested land-based cruise missiles with ranges of 500 kilometers. Perhaps neither President Vladimir Putin nor top Russian officials understand or believe that the manner of testing a cruise missile would put it in violation of such a deal, but the reports that Russia has now fielded at least four battalions of these systems render its perceptions immaterial, at least from Washington’s standpoint.

It is important to note that the U.S. military has not stated that the deployments put it at a strategic disadvantage to Russia or that the deployment requires the United States to pursue a comparable capability. As recently as 2016, the Joint Chiefs indicated that any military benefit Russia might derive from such a system could be addressed through other means, and that Washington did not need to pursue such a system or withdraw from the INF to prepare for building any INF-range missiles. So far, it has not done so.

If the decision to get out of the INF Treaty is not based on military necessity, then there is an urgent debate that should be conducted about why now is an apposite time to kill the deal and whether the United States has gone about it in the right manner. If the goal of the United States is to both keep pressure on Russia because of its behavior, maintain alliance unity in the face of these new challenges and to ensure that Russia is seen as being the party responsible for the demise of the INF Treaty and risking a new round of arms racing, then it is clear the Trump administration’s decision to withdraw now is a fundamental mistake.

So why terminate this venerable cold war document? The actors involved provide some clue. John Bolton, Trump’s national security advisor, has opposed INF for decades. If Russia were given a chance to come back into compliance, arms control agreements might prove their worth. But killing the deal while Russia is violating it means that the Kremlin can be cast forever as an unreliable partner, thereby undermining the case for any future arms control agreements with it. In the eyes of Bolton, not only is INF not worth saving, but keeping it around undermines his vision of a world where the United States no longer has to engage in what he sees as the chimera of negotiated nuclear restraint.

As for President Trump, INF withdrawal is a double win—it gives him the appearance of getting tough on Russia while at the same time actually doing President Putin and Moscow a favor. Moscow has essentially just been absolved of eight years of violating this agreement. It gets to keep its missiles and has a jumpstart on producing more if it chooses to do so. Plus it can point the finger at Washington for jettisoning the treaty. Not a bad day for Moscow.

The Trump team does deserve credit for effectively rallying NATO in support of the assessment that Russia has violated the deal. Under the Obama administration, convincing NATO as a whole of Russia’s actions was hampered by the decision not to declassify information about the violation. The Trump administration found a way to do so (in part, perhaps, because it is less worried about what the intelligence community thinks about its actions) and as a result, NATO issued several clear statements in support of U.S. actions, including the threat of withdrawal.

But it is equally clear that at least some NATO allies did so because they wanted to see Washington use NATO unity to work the compliance issue and bring Russia back into the treaty. No one believes, especially not the White House, that America’s ultimatum that Russia immediately admit its violation and swiftly destroy all offending systems will produce a beneficent result. That is likely why Trump made his demands so absolute.

Russia, for its part, has in the span of a year admitted the existence of the 9m729 missile that it claimed previously did not exist and offered to display it for American inspectors. While this move likely falls short of a full solution, it offers both a reasonable offer to pursue and gives the impression that Russia is willing to work to save the treaty in contrast with Washington’s refusal to do the same. It remains unlikely that this offer is a genuine Russia step towards getting rid of the system, but it is at least as possible that, say, North Korea is going to get rid of its nuclear weapons. And rejecting the offer out of hand allows Russia to claim the high ground and appear to be the reasonable party.

The result will likely be divisions within NATO about the decision to withdraw and skepticism about what happens next. While this is nothing new for a president who has moved to undermine NATO at almost every turn, it remains both a problem and dangerous. There is broad agreement that America needs to take more effective and consistent steps to deter Russian aggression—physical and political—and NATO unity, as it has for almost two generations, remains the best way to do so. Anything that makes that unity more elusive is another gift to Russia and a detriment to American security.

What happens next? It remains unlikely that the United States will produce and deploy a new ground-launched cruise or ballistic missile even if the INF goes away forever. No American ally in Europe or East Asia, for that matter, has viably offered to host such a system. What’s more, House Armed Services Committee Chairman Adam Smith has expressed deep skepticism about the decision to leave the INF Treaty and appears unlikely to find a new system for which there is no military rationale or ready host. Thus, Russia will likely keep its system, America will lose the ability to pressure them over its violations, and America and its allies won’t get any comparable system for their arsenals.

What America will get is a reduced ability to control the growing military competition with Russia, and lose one of the best means it has for easing the danger of crisis escalation with Moscow. The INF Treaty was originally negotiated because neither Moscow nor NATO allies believed the possession by both of missiles that could hit national capitals in ten minutes or less was a stable or desirable situation. They were right. Russia’s missiles, and the possible American responses including air- or sea-launched missiles in ready range of Moscow will put more, not less pressure on leaders to launch quickly in a crisis. The dangers of a nuclear confrontation, accidental or not, are growing.

Jon Wolfsthal is the director of the Nuclear Crisis Group and a senior advisor to Global Zero. He is a former senior director on the National Security Council and special assistant to President Barack Obama.