Kim Jong-un Leaves an Opening for De-escalation. Should the United States Take It? 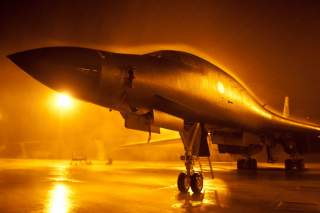 After a week of “fire and fury” and North Korean threats against Guam, there may be an opportunity for Pyongyang and Washington to deescalate tensions.

According to a report by the state-run Korean Central News Agency (KCNA), Kim Jong-un has been briefed on a plan for bracketing Guam with Hwasong-12 intermediate-range ballistic missiles. However, Kim gave no indication that he would order his military to carry out the plan in the immediate future. Instead Kim is adopting a wait-and-see approach to “watch a little more the foolish and stupid conduct of the Yankees” before the plan is put into motion.

At first glance the KCNA report looks like merely another volley in the war of words between the United States and North Korea, but if U.S. policymakers can look beyond the perennial bluster of the supreme leader they should see an opening to avoid escalation.

Based on the most recent KCNA report and last week’s statement from the spokesman of North Korea’s Strategic Forces, the threat to bracket Guam with missiles is an option for preempting U.S. military action against North Korea. If the United States continues to conduct B-1B bomber flights out of Guam, then Kim will order his military to fire missiles around Guam to demonstrate their ability to hold the island at risk. The flip side of this threat is that Kim should not launch the missiles if the United States stops conducting bomber flights. Additionally, North Korea also wants the United States to halt large-scale military exercises with South Korea that are scheduled to begin at the end of August. This is a prime example of coercive diplomacy.

The ball is now in the United States’ court and the Trump administration has two broad options from which to choose. First, the United States could consider North Korea’s threat to be either empty or not costly enough to change U.S. behavior, and bomber flights and military exercises would continue. Second, the United States could change its military behavior somewhat to mollify North Korea and try to get momentum behind a general de-escalation of current tensions. Neither option is without risk, but the second option has lower potential costs and greater potential benefits than the first.

Based on a general tendency to double-down rather than change course, the Trump administration will likely draw a hard line on North Korea’s threat. The ability of the U.S. military to launch a devastating retaliation against a North Korean provocation reduces the credibility of threats against Guam by raising the costs Pyongyang would have to absorb if it carried out its threat. Moreover, acquiescence to North Korea could embolden it to make similar coercive threats in the future.

Refusing to bend to North Korea’s coercive threat is a relatively low-risk option, so long as North Korea will not follow through on its threat to bracket Guam. The two key ingredients for a credible coercive threat are the capability and will to carry out the threat. Recent improvements in missile technology mean that North Korea does have the capability to carry out its threat, but it is more difficult to nail down whether or not it has the will to follow through. The Trump administration evidently believes that North Korea will not want to risk a U.S. retaliation and therefore will not make good on its threat. However, if this calculation is incorrect, then the United States could be forced into further escalation of the crisis, which is not in the nation’s interests.

If the United States has relatively little to lose and more to gain from adjusting its military activity, then making such adjustments in a nod to North Korea may be the more prudent policy choice. There are two forms of U.S. military activity that Pyongyang wishes to stop: B-1B flights out of Guam and large U.S.-South Korean exercises. The United States can refrain from these activities temporarily at negligible cost.

North Korea’s fear of the B-1B is based in large part on the erroneous assumption that the bomber carries nuclear weapons. This threat perception may be out of line with reality, but it plays an important role in North Korea’s coercive diplomacy. The United States could take advantage of North Korea’s fears. Temporarily halting B-1B flights out of Guam would be a major concession to Pyongyang with little negative impact on Washington’s ability to deter North Korea with other military forces stationed in the region. Agreeing to freeze B-1B flights would be a low-cost way to test whether or not North Korea is serious about de-escalating tensions.

Freezing annual U.S.-South Korean military drills is also on North Korea’s coercive diplomacy wish list, but this would be less likely in the near term. However, changing some aspects of the exercises could serve as an olive branch to Pyongyang without requiring a complete freeze. For example, during the Foal Eagle exercises earlier this year, F-35 jets and U.S.-South Korean special forces practiced attacking North Korea’s nuclear and missile facilities. Canceling this portion of future exercises would make it harder for the United States and South Korea to eliminate North Korea’s nuclear weapons in a conflict, but this could reduce the incentives that North Korea currently faces to “use or lose” its nuclear weapons early in a crisis.

Refusing to budge on North Korea’s demands may force Pyongyang to back down, but if this assumption is false, then the United States would face pressure to further escalate current tensions. Kim Jong-un has provided the Trump administration with a potential off-ramp to de-escalate the current crisis. There are risks to taking it, but continuing down the current path is unlikely to bring victory.