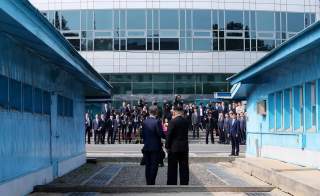 This weekend’s summit was no doubt remarkable. The symbolism of it all was overwhelming, and the hype has been extraordinary. The press coverage has been relentless. I have seen more foreign correspondents in South Korea than ever before. The summit even had its own slogan.

The summit outcome—the “Panmunjom Declaration”—is indeed pretty stirring stuff. But analysts are already pointing out that we have seen these points and principles in previous inter-Korean statements. And indeed, the emerging pundit consensus seems to be that the summit was long on principle and symbol, but short on detail. The hard part—getting North Korea to implement in a verifiable way—comes next, and this of course is where previous deals have collapsed.

This reading—lots of striking ceremony but little real movement—strikes me as broadly correct. Indeed, that is why many counseled against a summit at the beginning of the negotiating process. It would by definition be limited to rhetoric while raising sky-high hopes of a break-through that is not obviously in the offing, as North Korea has still not offered any genuine concessions. South Korean president Moon Jae-in has rushed this process, and it is not entirely clear why. My suspicion is that he was so afraid U.S. President Donald Trump might start a war that his administration has sprinted as fast as it could, thereby locking Trump into a diplomatic track.

This was deft diplomacy but also, I fear, raises expectations so dramatically that it could backfire later this year. The Trump administration wants enormous concessions from North Korea—CVID (complete, verifiable, irreversible dismantlement) of the nuclear program. This is, to put it mildly, highly unlikely. North Korea has spent forty years developing these weapons. It has endured punishing sanctions, a famine, extreme isolation, and alienation from its Chinese patron to get them. Yet National Security Advisor John Bolton has talked as if he expects the North Koreans to simply hand over the missiles. Also, Trump has threatened to walk out of his summit with Kim. (This would be a remarkable snub, especially in Confucian East Asia. Let’s hope the president is bluffing.)

This is one reason for which I have argued to cancel or push back the Trump-Kim summit. If it goes badly—if the North Koreans say something like, “denuclearization will take eight years, cost the United States $20 billion, and will be overseen by China”—the Trump administration might easily conclude that Kim is not “honorable,” but the “rocket man.” Indeed, there is suspicion that this explains Bolton’s lack of resistance. The summit will likely be a bust, in which case Bolton’s argument for strikes becomes that much stronger. Moon may end up regretting that he has so relentlessly fast-tracked this whole thing.

Much of this confusion stems from the debate over why the North Koreans have suddenly chosen this moment to deal. Both hawks and doves have read their pet theories onto this turn. Hawks want this to be the result of Trump’s maximum-pressure campaign, while doves want this to stem from the Moon government’s conciliatory approach. We have no data from inside North Korea to actually support either interpretation of course. But I reckon both of these are wrong, because they both start from the notion that we on the outside have a lot of influence on North Korean foreign-policy decisions. The U.S. superpower is particularly prone to read the decisions of others as products of its own.

But in the case of North Korea, that perspective is likely wrong. If there is any state in the world that has insisted on maximum sovereign freedom of action, it is North Korea. The North Koreans routinely operate frightening far outside of global norms—overseas assassinations, drug-running, counterfeiting and so on. In speculating on Pyongyang’s decisions, we should probably default to internal considerations. The problem is that we know so little about decisionmaking in North Korea, that we slide back toward looking at foreign influences.

But looking internally for a moment, the most obvious change in the last six to twelve months is the completion of a nuclear missile—one that can strike the continental United States. The regime itself has not changed, opened up, or otherwise liberalized. It is still the same Orwellian gangster tyranny it has been for decades. It is completed nuclear missilization that is the most obvious North Korean domestic change and the reason for the country’s sudden interest in talking to the world.

The mil-tech community is still debating exactly what capability the North has, but it is pretty broadly accepted that the country can hit the U.S. homeland. This allows Pyongyang to deter U.S. military action against it. The United States is highly unlikely to launch a regime-change war against North Korea because the North would nuke the United States in retaliation. That was the whole point of the nuclear program, and North Korean negotiators have said this to us repeatedly.

So with deterrence in place, the North can now come out and talk. The North Koreans can bargain. And indeed, that is what they are doing. Meetings with Moon, Trump, Xi Jinping of China—possibly even Shinzo Abe of Japan and Vladimir Putin of Russia—are all in the works. Kim even met the International Olympic Committee. Why not meet with anyone and everyone to cash out this program, to pull concessions out of the international community for it?

In effect, Kim is going shopping. He is not negotiating, because the United States bullied or persuaded him to do so. He is bargaining, because he is in a position of strength now. He has the weapons, so now he is looking to get a better deal than the North ever could before.

And if no one offers a good enough deal, the North can always fall back to its defensive crouch and wait for the storm of international opprobrium to blow over. No one wants North Korea to have nuclear weapons, and although the United States issues a lot of tough declarations, it cannot compel denuclearization without the risky use of force. Unfortunately, America will have to adapt to Northern nuclear weapons whether it wants to or not.

The model here is Pakistan. Like North Korea, it is a weak state with a dangerous ideologues, and everyone worried when it got nuclear weapons that Islamic fundamentalists might acquire one—or that an Indo-Pakistani nuclear war would break out. But that never happened. All that angst and fear eventually subsided as everyone just got exhausted worrying about Pakistani nukes. Eventually the world gave up, moved on, and learned to live, however unhappily, with nuclear weapons in a country with serious religious fanaticism problem.

North Korea will likely be the same. Should the summits fail, Pyongyang will dig in its heels, hold tight through the storm of denunciations and sanctions and the rest, and just wait us out. Then at some point, the international community will just drop the whole thing of exhaustion, and North Korea will be a de facto nuclear power. In fact, this is already happening. It is awful, but I see little choice, barring a potentially disastrous military conflict.

In summary, North Korea is bargaining from strength, not weakness; it is shopping, not capitulating.

Robert Kelly is a professor of international relations in the Department of Political Science at Pusan National University. More of his writing can be found at his website. He tweets at @Robert_E_Kelly.