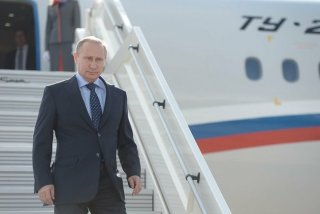 David Kramer, the president of Freedom House, is well-known for his forthright, even acerbic, views of Russia. He makes a point of ventilating them whenever and wherever he can. At a Center for the National Interest event last year, for example, I personally saw him get into a heated, emotionally charged exchange with the Russian ambassador to Washington about his country’s response to American sanctions pertaining to human rights.

But even by Kramer’s rather uninhibited standards, his recent letter to the Washington Post about U.S.-Russian relations is eyebrow-raising. In it, Kramer attacks Matthew Rojansky, the head of the Woodrow Wilson Center’s Kennan Institute. The president of Freedom House objects to Rojansky’s appearance in a Post news story in which he is quoted as saying: “We don’t want to deepen the conflict and make this into an ‘us versus them’ conflict. No one denies that the Russians are part of the solution. They have to be.”

“Mr. Rojansky,” Kramer self-importantly writes, “should speak for himself.”

How peculiar that the head of such an important organization would take the time to denounce a brief comment in a news story that does not mention his organization or even its subject matter! Is it really illegitimate for the head of another institution—one named, incidentally, after the diplomat George F. Kennan who viewed the kind of Cold War attitudes espoused by Kramer with distaste and who advocated treating with the Kremlin as much as possible—to suggest a course different than that championed by Kramer? Is it, moreover, a radical statement to argue that the U.S. might do well to maintain some modicum of relations with Russia? Or does Kramer believe he holds a patent on the appropriate approach to Moscow?

The truth is that the denouncer of Putinism seems to have absorbed its spirit. How else to explain the zeal to delegitimize differing views? It’s particularly ironic that the head of an organization called Freedom House, which receives much of its funding from Congress, appears to be on a search and destroy mission when it comes to debate about foreign affairs in America itself.

The problem, at bottom, seems to be that Kramer, who publishes regularly in the Post and whose views jibe with that of its editorial page, was offended that the Post would solicit views other than his own. To judge by his little letter, he appears, in other words, to regard the newspaper as his private preserve. Putin’s views of the press, as Kramer’s outfit has documented, are not all that different.