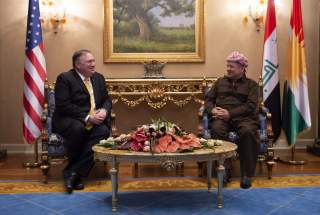 It’s been over a year since the Kurdish Regional Government’s (KRG) independence referendum where over three million people voted overwhelmingly in favor of separating from Iraq. Much like their Iraqi brethren, Syria’s Kurds have also benefited handsomely from the civil war, now controlling cantons in northeastern Syria. Presently, both regions are seen as models for democracy in the Middle East, and the Kurds enjoy a level of autonomy and freedom of which their ancestors could only dream. But this freedom is a privilege afforded to few. For years, major Kurdish political parties and their associated militias have relied on repressive governance to maintain and expand power in their respective regions. Kurdish authorities in Iraq and Syria aren’t ready for democracy, they’re ready to rule, and there’s a stark difference between the two.

Since the early 1990s, the Kurds of Iraq have made impressive strides in their self-administered region, assembling a dedicated police force called the asayish and a 111-seat Parliament. Now the Iraqi Kurdish people are finally exercising the kind of freedoms that they’ve dreamt of for decades under the oppressive regime of Saddam Hussein. In Syria, the Democratic Union Party (PYD) used the Syrian government’s retreat from the northeast of the country as an opportunity to move in and provide services such as water, sanitation, and most importantly, security.

The Kurdish governing authorities in Iraq and Syria are not aligned, in fact they are far from it. The PYD in Syria is closely linked to the Kurdistan Worker’s Party (PKK), a U.S.-designated terrorist organization led by the long-imprisoned Abdullah Ocalan. The Kurdistan Democratic Party (KDP) in Iraq, led by the Barzani family, openly condemns the PKK and opts instead to maintain a Western-friendly public image, and it has carefully crafted an image of a democratic Kurdistan. Where the two leaderships converge, however, is in their governance. Neither respect a free press, both value loyalty, often at the expense of democratic processes, and both see nonalignment as a punishable offense.

In late 2017, for example, two ethnic Assyrian mayors, Faiz Jahwareh and Basim Bello in the towns of Alqosh and Tel Keppe in northern Iraq, were forcibly removed from office. In July 2017, Jahwareh was deposed by the local Nineveh Provincial Council (3/4 of which is comprised of KDP members) on baseless charges of corruption that were later dismissed by an Iraqi federal court, and replaced him with KDP member Lara Yousif. In the predominantly Assyrian town of Tel Keppe, Mayor Basim Bello was removed from office on August 3, 2017, by the very same KDP-dominated Nineveh Provincial Council. Many believe that Jahwareh and Bello’s vocal opposition to Kurdish annexation was the reason for why they were targeted. Both ousters came on the heels of the September 2017 Kurdish independence referendum and seemed like an attempt by the KDP to remove their critics from positions of power. Assyrians in northern Iraq are largely resistant to Kurdish annexation and prefer to remain under Iraq’s central government’s jurisdiction. This, of course, has not stopped the KDP from seeking out Assyrian Christian patrons who can advocate for and encourage more support for the Kurdish independence cause.

Assyrians are hardly the only victims of the KDP’s tyranny. On March 25, 2018, teachers and healthcare workers protested across the Kurdish region over unpaid wages, resulting from an austerity measure. The KRG has been paying civil servants reduced monthly salaries for three years. Kurdish asayish in Akre, Dohuk, and Erbil responded by arresting and detaining eighty-four protesters and fifteen journalists. Several detainees claimed that they were not allowed to contact their families or seek legal counsel, violating due process. Worse still, officers allegedly demanded that detainees provide them with the security passcodes to their phones and their Facebook passwords. Also, they allegedly demanded that detainees refrain from protesting in the future. It is indeed a curious democracy if it seeks to silence dissent—rather than encourage—the expression of free speech.

In northeastern Syria it’s much of the same. In mid-August 2018, the PYD forced the closure of several Assyrian schools in the towns of Derik and Malikiyyah, citing their curriculum was not approved by the local administrative authority. Prior to the incident, the school’s administrators refused to teach the PYD’s proposed curriculum, which they felt was compromised with unnecessary glorifications of PKK leader Ocalan and a skewed curriculum in favor of Kurdish history. When Assyrian-Syrian journalist Souleman Yousph spoke out against the forced closures on Facebook, he was arrested and detained without charge on September 30, 2018.

Commentators and policymakers in and out of Washington are imploring the international community to give the Kurdish people the sovereignty they seek—that their regions are bastions for democracy in the Middle East. In a recent interview, famed political scientist Francis Fukuyama even went as far as to say that the KRG has been more successful at creating democratic institutions than have the Iraqi people. An interesting comparison, considering that Iraq, since its first post–Ba’ath government formed in 2005, has had four peaceful transitions of power while Masoud Barzani’s KDP have dominated the KRG since 2005. The cohesive society that Fukuyama credits for the Kurdish region’s democratic success is merely a façade built on a carefully painted public image, millions of dollars of patronage, and the constant subjugation of those who would speak out against their government. The Kurdish people and the thousands of Assyrians, Arabs, Yazidis, and other ethnic and religious minority groups that live in these regions deserve a representative, democratic government. Those in power have consistently proven unable and unwilling to deliver on this.

Rosemary Youhana is the 2018 Human Rights Fellow at Young Professionals in Foreign Policy (YPFP). Previously, Youhana worked as an advocacy associate at the Assyrian Universal Alliance Americas Chapter where she collaborated with civil society organizations based in Iraq, Syria and Turkey on human rights issues facing ethnic and religious minorities. She holds BAs in International Relations and French from the University of California Santa Barbara and a Master’s in International Affairs with a focus on human rights and global governance from American University’s School of International Service. She as been previously published with News Deeply, Diplomatic Courier, the Geopolitical Monitor, and the Hill.