Kurdistan Independence: An Island of Stability or Source of New Conflict? 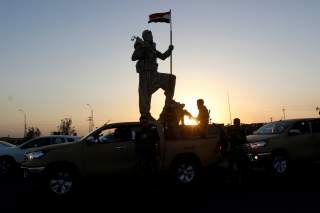 Today, millions of people living in the Kurdistan Regional Government (KRG) area of Iraq will go to the polls to vote on an independence referendum. Will the vote help usher in stability for the region or fuel yet more disruption and violence, possibly even a new war? Either is possible, yet neither is set in stone.

To support Kurdish independence would potentially pit the Trump administration against NATO ally Turkey, cause a rift between Baghdad and Washington, and just as the fight against ISIS appears to be winding down, possibly spawn a civil war between the Kurds, Shia and Sunni militias within Iraq. America is in a lose-lose position.

What President Trump should do now is express sympathy with the aspirations of the Kurdish people, but he should stop short of encouraging them. Instead, he should choose to emphasize dialogue, diplomacy and patience among all the stakeholders. He should emphasize that the vote is itself nonbinding and will not automatically lead to separation. Article 140 of the Iraqi constitution provides for “a referendum in Kirkuk and other disputed territories to determine the will of their citizens”—which the KRG claims authorizes next Monday’s vote. The questions of how the vote happens, when it occurs, and how the territory and natural resources will be divided (a contentious issue) are yet to be resolved.

During his address to the U.N. General Assembly on Tuesday, Turkish president Tayyip Erdogan said of the KRG: “Steps such as demands for independence that can cause new crises and conflicts in the region must be avoided.” To reinforce his message, Erdogan ordered large-scale military maneuvers on Iraq’s northern border.

Israel is thus far the only nation to publicly endorse the vote. While the KRG is grateful for the support, it has already inflamed tense relations with Iran. Tehran is opposed to Kurdish independence because they fear it will embolden the sizable Kurdish minority within its borders to seek greater autonomy. While Iran may not overtly use military force to prevent the KRG from going independent, it does have other, lethal levers to play.

Hadi al-Amiri, the leader of Iraq’s Badr Organization––with strong links to Iran––warned that if the KRG votes for independence, then he and his Shia Hashd al-Shaabi militia may use force to prevent separation, especially in defending the oil-rich city of Kirkuk. His isn’t the only Iranian-backed armed militia threatening to use force against the Kurds.

Imam Ali Fighting Division––an armed Shiite group with ties to former Iraqi prime minister Nouri al-Maliki––warned that it will “attack Kirkuk if the city is annexed to Kurdistan or to whatever independent state that might be established as a result of the referendum.”

The Kurds are making preparations for the possibility of violence in Kirkuk.

Washington, meanwhile, is unequivocally and actively opposed to the move. Brett McGurk, the Special Presidential Envoy for the Global Coalition to Counter ISIS at the Department of State, said that “this referendum is ill-timed and ill-advised. It is not something that we can support. That’s not simply our position, that’s the position of our entire international coalition.” Yet despite all this opposition, the KRG is just as unequivocal in its insistence on having the vote.

On Tuesday, President Barzani told a reporter, in an apparent nod to McGurk’s statement, said that Kurdistan would “proceed with holding the referendum” if it did not “receive an alternative in the coming days by the international community that guarantees Kurdistan’s independence.”

The many competing interests involved in the KRG vote underscores just how difficult it is going to be for the United States to find an effective policy position. On one hand, the United States is perhaps the world’s most staunch advocate of self-determination. I have been to the region many times and can attest that the Kurdish region is a veritable island of stability in an otherwise ocean of chaos in the Middle East. I can safely walk the streets of Erbil, the capital of the Kurdistan Region, without fear and observe how the KRG’s secular government has created a politically stable environment in which Christians, Muslims, Yazidis and nonreligious people live together in peace.

Russia’s Military Is Back

Ultimately, the people of the region who will have to live with the outcome of this situation must be the ones to navigate the challenges of resolving this impasse. The United States should encourage all parties to find solutions that are at least tolerable to all parties. If the Kurdish independence question can eventually be settled without violence, then it could, at long last, provide a ray of hope for the region. If it simply represents the next civil war, the regional despair will deepen.