The Kurdistan Region of Iraq Is Struggling to Survive 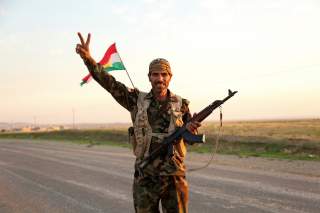 Among the other challenges Erbil faces today are a desire to solve disputes with Baghdad over Kirkuk and Sinjar, as well as encourage more  stability in Nineveh plains between Erbil and Mosul. The minister of transportation and communication, Ano Jawhar Abdulmaseeh Abodka, is a member of the Christian minority. He speaks with passion about the KRG’s role in sheltering Christians who fled ISIS and also in creating conditions for the community to thrive today. He also speaks of the problems Christians face today in Nineveh due to sectarian paramilitaries. Here he suggests the United States could also play a role, especially given the current administration’s commitment to religious freedom. Yazidis who fled ISIS are also still living in IDP camps in the Kurdistan region, unable to return to Sinjar where they lack security and investment.

The transportation minister says that there is an opportunity now to commit to the private sector and provide new options for transportation. The KRG suffered from historic neglect, especially in the era of Saddam Hussein when the region was persecuted brutally. Now the bridges and new highway stretching north of Erbil to Dohuk and the Turkish border are examples of the future. But again, here, he stresses the need for a budget from Baghdad.

The fiscal constraints facing the transportation sector are linked to those facing the security forces in the region. The Peshmerga provide the security to keep the region safe and stable and enable an economy that is closely tied to trade with Turkey to prosper. It is a complex and hard-to-balance situation. “We need serious help to protect ourselves, we are under threats every minute. We must be ready for the eventualities,” says a Kurdish commander who is in charge of the border regions between the KRG, Iran and Turkey. “We are trying to get back on track and our relations with central government is getting better, I think the current PM is the last chance for Iraq, if we can’t solve the problems with those who lead Iraq now, then we are unlikely to solve them in the future.”

Across the border in Syria the surprise U.S. decision to leave on October 6 has added to the problems facing Erbil. The current and past presidents have warned the United States and also called for a return to peace in eastern Syria. Even though Washington scrambled to put together a ceasefire on October 17, the reality appears to be that fighting will continue. This will mean more refugees coming to the Kurdistan region. It also raises questions about who will control the border area, will it be the Syrian regime, or will Turkey have increased influence, or will the Syrian Democratic Forces remain. If the United States is willing to walk away so easily from an area it invested in since 2014 to defeat ISIS, what will become of U.S. policy in Iraq? These are the questions now being asked in Erbil.

The Peshmerga commander’s comments about fears for the future and those of other officials from ministries and frontline Peshmerga units show the growing concern about the future of the region two years after ISIS was routed in Mosul and Erbil suffered a setback after the independence referendum. Washington’s policy is to avoid a conflict with Iran while keeping up the maximum pressure campaign. Tensions across the Gulf have affected Iraq where Iranian-backed Shi’ite paramilitary groups, some of them already sanctioned by the United States for ties to the IRGC, have threatened U.S. forces and demand the United States leave Iraq. This puts U.S. forces in a bind, wary of the threats and also wanting to continue the mission of defeating ISIS. It also means that U.S. policymakers are concerned about alienating Baghdad. For the Kurdish region the main message is that Washington should see Erbil as an essential partner for regional stability, a hinge on which stability across northern Iraq and into Syria turns. With the United States already involved in a complex balancing act in eastern Syria, fighting ISIS while keeping an eye on Iran and working with Turkey on a security mechanism, the KRG is more important than ever. Erbil wonders when the United States will start to see it that way.