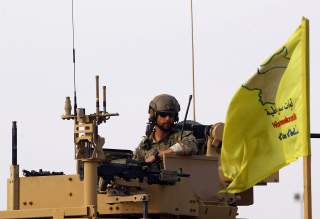 The victory of the Syrian Democratic Forces (SDF) over the Islamic State caliphate in March has left the SDF in effective control of one-third of Syria. Encompassing 20,698 square miles of northern and eastern Syria, it is a large terrain about the size of West Virginia, or three times the size of Kuwait. Some five million people live there, including Arabs, Kurds, Syriac-Assyrian-Chaldean Christians, as well as Yazidis and Turkmen. Stabilizing and rebuilding this diverse and complex region may prove even more difficult than defeating ISIS.

The challenges are many. Assad continues to refuse to make any concessions to the region, although his forces lost control of the north more than seven years ago. Erdogan continues to threaten to invade. ISIS sleeper cells carry out attacks on a regular basis. And numerous countries around the world refuse to take back their own citizens who voluntarily joined ISIS, forcing the Self Administration to feed and house thousands of detained foreign ISIS fighters for an indefinite amount of time.

Given the enormity of the challenges and precarity of the situation, it is of utmost importance to carefully calibrate and implement U.S. policy at this watershed moment. Recently, some analysts have questioned whether the Self Administration is able to govern effectively. In a piece entitled “Kurdish-Arab Power Struggle in Northeastern Syria” Elizabeth Tsurkov and Esam Al-Hassan asserted that Kurds are not willing to share power with their Arab counterparts, that the SDF is not able to negotiate tribal politics, and that the Self Administration is not guided by experienced professionals, but by ideological cadres. Based on our own extensive research in northeastern Syria, we believe these assertions at best offer a surface-level understanding of the reality on the ground, and at worst potentially inflame tensions, rather than offering an evenhanded analysis of them. Ultimately, the authors recommend that the seventy-nine-member Global Coalition should use its leverage to push for “real self administration.” We agree that the coalition needs to increase its support to the Self Administration. Providing effective assistance requires a cogent analysis that can account for complexity.

Tsurkov and Al-Hassan use unnamed sources to claim that some Kurdish SDF commanders believe Arabs are “deeply tribal, prone to internal conflict, unprincipled and untrustworthy.” They say this although Arabs, Kurds, and Christians have fought side-by-side in the SDF to defeat ISIS. An estimated eleven thousand members of the SDF were killed in battle, and they are buried side-by-side in cemeteries across the region.

The People’s Protection Units (YPG) forces have cooperated with exclusively Arab, or Arab-majority, armed groups throughout the course of the conflict. The YPG began actively recruiting Arabs since at least late 2012, during a series of battles for control over the city of Ras al-Ayn (Serekaniye in Kurdish) along the Turkish border. This effort began years prior to the creation of the SDF in October 2015. Further, Arabs have continued to join the SDF even after the caliphate was defeated in March. Currently, at least more than half of SDF fighters are Arabs. A number of regional commanders are also Arabs, although the top SDF leadership is still Kurdish. This is in part because Kurds were the ones who provided the initial leadership in the fight against ISIS starting in Kobani. People from Deir Ezzor who could have potentially led the fight against ISIS either fled, or joined ISIS. As a result, there was a lack of local leadership that the SDF is now trying to solve through the creation of military training academies. The current commander of the Deir Ezzor Military Council is Abu Khawla (an Arab) who leads some 4,000 fighters. However, the whole Eastern Region commander is Chia Firat (a Kurd). Furthermore, all commanders and battalion commanders in Deir Ezzor are Arabs, although there are Kurdish commanders who accompany them.

In contrast to what the authors claim, Kurdish leaders have often been sensitive to Arab concerns. The very name of the governing entity has even changed in response to this: in December 2016 the Kurdish term “Rojava” was dropped in favor of Northern Syria, angering many Kurdish nationalists. Moreover, Arab settlers who were settled by the Assad regime in the 1970s in Hasakah province to replace Kurdish villages have been allowed to remain.

In 2018, the federal system was abolished and the administrative center or capital was moved from Qamishli to the Arab town of Ain Issa. The official logo of the administration is in Arabic, Kurdish, Syriac, and Turkish. Important buildings are guarded by Arab security forces alongside Kurds. This was also one of the reasons why the administration has used an amended regime curriculum without Baathist ideology. The Syrian opposition has done the same in areas under its control and amended the Baathist curriculum.

If Kurds distrusted Arabs as the authors claim, why did they move the administrative center to an Arab town, actively recruit Arabs into the SDF, and employ Arab security forces to guard critical buildings and facilities even in Kurdish majority cities? By contrast, the Syrian opposition based abroad until this day refuses to drop the word “Arab” from the Syrian Arab Republic, thereby maintaining the Baathist ideology that not only marginalizes but denies the very existence of non-Arabs inside Syria.

Although the SDF is accused of not understanding the tribal character of Deir Ezzor by one anonymous tribal leader cited in the article, Dr. Haian Dukhan argues that the SDF has been the most successful in dealing with the tribes compared to Turkey and the Syrian government. On May 3, 2019, the Syrian Democratic Council (SDC) organized a forum that was attended by five thousand dignitaries of sixty Syrian tribes. Even before the creation of the SDF, the YPG has worked with and recruited from the Shammar, Jabbour, Amesayel, and Sharabiyya tribes since early 2013. The Deir Ezzor Military council consists of fighters mainly from the al-Shai’tat tribe.

For decades, Syrian Kurds have been subjected to numerous forms of collective punishment: Hafez al-Assad stripped hundreds of thousands of Kurds of their citizenship, ISIS issued a fatwa forcing all Kurds to evacuate Raqqa because the YPG cooperated with the coalition, and Turkey forcibly displaced Kurds from their homes in Afrin. Despite this history of collective punishment, Kurds are refusing to engage in acts of revenge or collective punishment against others. The SDF are also refusing to allow Arab tribes in Deir Ezzor, some of whom want to collectively punish other tribes who they see as guilty of collaborating with ISIS, from doing so. This was the reason the SDF restricted the role of al-Shai’tat tribal fighters in the last months of the Baghouz operation, since ISIS massacred hundreds of their members in 2014. In July, members of the al-Shai’tat tribe executed one person who confessed to murdering one of their relatives, an incident which the SDF was not able to prevent.

The role of Kurdish Workers’ Party (PKK) cadres in the article is also exaggerated. Since 2011, PYD cadres led the process of setting up local self-administrations. Many of them were local Syrians who were not trained in Qandil, and never fought as guerillas. New academies have been opened to train what they call “local cadres.” The commune system is not led by just cadres, but by local Kurds and Arabs sympathetic to the new system.

Deir Ezzor’s Legislative Council alone has three hundred members (none of them Kurds), all from Deir Ezzor and selected by their local tribes. The council was formed in a general conference following months of meetings among local communities, including the two main tribal confederations (Bagara in the west and Agaidat in the east), all while intensive military operations were ongoing against the last ISIS strongholds.

Although Tsurkov and Al Hassan present cadres as outsiders who are unfamiliar with the region, there are numerous examples of cadres successfully mediating conflicts. For example, in June 2019, there was a clash that lasted for over thirty-six hours between the al-Bujamil and al-Buferio clans, which was only resolved by tribal and SDF intervention. When Deir Ezzor was ruled by rebel factions, they were not able to prevent rival Jihadist factions from taking over large parts of the governorate. Without the SDF, there is a real risk that jihadist factions such as HTS and ISIS could return to Deir Ezzor. In Idlib, rebel factions were not able to resist HTS domination.

In areas under Turkish control, Turkey has often been unable to stop rebel infighting. For example, in al-Bab, Ahrar al-Sharqiya, a faction originally from Deir Ezzor, fought other factions last year. In August 2017, this group threatened U.S. soldiers. Bringing such groups to Deir Ezzor would not lead to more stability. Given the number of rival factions on the ground, a centralized command structure—which the SDF has maintained even as it has expanded and adapted to local circumstances—is absolutely necessary.

The authors further argue that educated professionals are refusing to join the administration for political reasons. They do not mention economic incentives such as salary disparities. Although the salaries provided by the Self Administration are better than those offered by the Syrian regime or Turkey in the same sectors, many prefer to work for NGOs or the private sector because the salaries are even higher. For example, employees of the Self Administration earn between $100-$350 per month. By contrast, NGOs pay between $500–$2,100 per month.