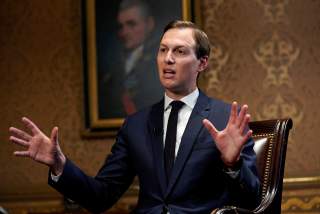 MANAMA, Bahrain – President Donald Trump’s senior advisor, and son-in-law, Jared Kushner has been working in secret with Middle East leaders for more than a year. This week, in Bahrain, he unveiled his plan, while I was in the room.

With high-security arrangements, and without official Israeli and Palestinian representatives, the “Peace To Prosperity Workshop” was held on Tuesday in Manama. It was Kushner’s attempt to secure buy-in from Arab leaders with a plan to supply $50 billion in development aid to the Palestinians—the largest amount ever proposed by the U.S. government. Surprisingly, it worked.

For decades, policymakers have focused on a largely political solution to the Israeli-Palestinian conflict; where to draw lines, who controls what land and so on. This approach brought us the Oslo Accords in the 1990s, where Palestinians were granted more than 90 percent of the land and water that they said they wanted, along with a security guarantee. Yasser Arafat ultimately rejected the plan; riots and demonstrations rocked the rest of the decade.

Kushner’s approach is fresh and unique. He starts from the premise that the Palestinians want peace, but, especially, the younger majority wants the hope for a better life: modern housing, safe and effective schools, rewarding jobs, peace, order and prosperity.

At the conference, former British prime minister Tony Blair essentially backed Kushner’s plan: a political agreement without an economic vision, and an international commitment to help Palestinians to improve their lives, will flounder and fail. While he stressed that he remains committed to a two-state solution, Blair said that it will only happen "when the economics and politics are right.”

Kushner’s great insight is that economic development should come first and shape the discussion for a political solution. His second insight is that a single “grand bargain” is not realistic; that an evolutionary and gradual approach that builds trust along with economic milestones is more likely to succeed.

Along with economic development, the Palestinians need effective government. This means trash collection and policing, safe hospitals and roads. It means transparency into government accounting and processes as well as accountability to Palestinian voters. Over time, this will bring forth a new generation of men and women, who are professional politicians and able bureaucrats, who can discuss complex issues with the Israelis and negotiate a viable political solution.

In turn, the Israeli government needs to find the courage to compromise. That means political leaders who will take risks, making decisions that may be unpopular but necessary for peace.

While Palestinian and Israeli officials were not there, representatives of their civil societies were. More than a dozen prominent Israelis businessman participated. Some fifteen Palestinians attended, including Ashraf Jabari, an influential leader from Hebron. He was the only Palestinian scheduled to speak.

The opening speaker was Kushner. In his talk, he presented the economic section of the peace plan that he has been working on for the past two years. “For too long the Palestinian people have been trapped in a framework for the past,” Kushner said. “This is a framework for a brighter future. It is a vision of what is possible with peace.”

He vividly illustrated that possible future. “Imagine a bustling tourist center in Gaza and the West Bank. Imagine people and goods flowing securely throughout the region as people become more prosperous. This is not a stretch. It is the historic legacy of the Middle East,” said Kushner. “Peace can only be achieved if it comes [with] a pathway for people to improve their lives. Pursuing opportunity instead of blaming others for their current misfortune … Palestinians have intelligence, perseverance, strength in great supply … My direct message: Despite what those who let you down in the past tell you, the president and Americans have not given up on you.”

It soon became clear that many Arab leaders agreed with Kushner. “By generating jobs, income opportunities and filling gaps in delivering basic services, the private sector can help build momentum behind a fragile economy and instill hope in the people of the region,” said Emirati businessman Mohamed Alabbar, one of the wealthiest people in the Gulf region. “Indeed, when a steadfast peace plan is eventually put in place, the private sector will be the important catalyst that kickstarts the transformation of the West Bank and Gaza.”

Thomas Barrack, an American real estate investor, agreed. “Let’s do something tangible and concrete that people can see, and when kids play football, first they smile and, secondly, they don’t do other things.”

If Kushner succeeds in getting his vision adopted, it will mark a true turning point in Middle East affairs. He will earn a place in history alongside President Jimmy Carter, who negotiated peace between Egypt and Israel in the 1970s. Ahead lies the challenge of winning over the governments of Israel and Palestine. But, in the room in Manama, Arab and Jewish leaders were excited for the first time in a very long time.