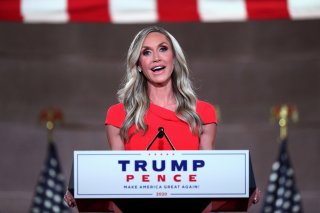 Seven Republican senators sided with Democrats in last week’s impeachment trial to convict former President Donald Trump on a charge of inciting insurrection on the U.S. Capitol. But one shocking vote to convict—Sen. Richard Burr’s (R-N.C.)—spurred “wows” through the wave of lawmakers on the floor and later enraged Republicans in his home state.

Burr’s surprise decision—after previously voting that the trial was unconstitutional—sparked talks over the contest to replace the senator after he will vacate the seat in 2022, with one contender being a Trump family member: the former president’s daughter-in-law, Lara Trump.

“My friend Richard Burr just made Lara Trump almost the certain nominee for the Senate seat in North Carolina to replace him if she runs,” Sen. Lindsey Graham (R-S.C.), told Fox News on Sunday.

Graham added, “I certainly would be behind her. I think she represents the future of the Republican Party.”

Although Lara Trump, a former personal trainer and television producer, hasn’t publicly come forward in recent months about a North Carolina Senate run, she is reportedly still deciding whether to launch a bid as part of a joined effort to thread the Trump name back into the Republican Party fabric in a post-Donald Trump era, according to the New York Times. The Capitol assault, however, bittered her interest in pursuing political office.

Her name hasn’t been floated in the mix of candidates since November when The Times said she was considering a run for Senate.

But a Trump name on any ballot could see massive success and national fundraising, as the former president holds an iron grip over the GOP and as state and local level political operatives have moved to censure any Republican who is disloyal to Trump—like Burr—by either voting to convict or supporting the constitutionality of impeachment.

“Obviously hard to say, but, for now, the Republican Party is still Donald Trump’s party and one would have to imagine that if he threw his weight behind his daugher-in-law that shares the Trump name, that would be incredibly influential in Republican primaries,” Steven Greene, a political science professor at North Carolina State University, said. “I would not say she's in any way a lock to win, but she would be a very, very serious contender for the Senate seat.”

Burr’s move to separate with the majority of the GOP and the slew of condemnation that followed, uncovered an imminent Republican hurdle that candidates will face in any primary—the mission to get elected within a fractured party while appealing to Trump loyalists and more traditional members of the party. But in North Carolina, a highly polarized battleground, Senate contenders could hit other obstacles.

In the 2020 presidential election, Trump beat President Joe Biden by just 1.3 percentage points. Four years earlier, Trump defeated then-Democratic nominee Hillary Clinton by 3.6 percentage points, revealing a changing voting landscape in the state with its transforming demographics, which indicates that the race for Burr’s Senate seat could be won by either party.

“The state is changing,” John Aldrich, a Pfizer-Pratt professor of political science at Duke University, said. “There is some potential for a Georgia style effort among minorities to lift what would ordinarily be predicted as lower turnout from them, relative to other elections where Democrats win statewide offices.”

If Lara Trump were to run for office in North Carolina, there is some speculation that her candidacy would energize Democratic voters to stomp on her bid, especially among the state’s widespread Black population.

Aldrich also noted that “It is too early to tell if a Lara Trump could blunt the Republican drop among suburban women and so on,” a group that’s grown in the state, as suburban women support for the former president declined in the most recent election.

“The demographics are moving toward an advantage for the Democrats, but that is both slow in this time frame and basically moving the Democrats back to having a reliable voting base that is about equal to the GOP's,” Aldrich said, adding, “there are more registered Democrats, but this is still a state where the turnout edge advantages the Republicans, so it really is about evenly balanced.”

Ever since the Trump family left the White House last month, talk has murmured over who will prop up the Trump legacy and seek office first. Donald Trump Jr., the former president’s eldest son, has successfully been able to reach his father’s MAGA coalition by echoing claims of voter election fraud and pushing supporters to “stop the steal.” His loyalty to the former president during the 2020 campaign trail sparked rumors of a future presidential bid of his own.

Ivanka Trump, the president’s eldest daughter and a former White House official, also attempted to rally support for her father’s candidacy on the campaign trail—primarily from suburban women—but hasn’t directly indicated ambitions to seek office. Reports, however, have said she is eyeing a congressional seat in Florida.

And Eric Trump, Lara Trump’s husband, hasn’t offered any drive to be in the political spotlight.

“Presumably, if any of them go first, the others can judge the reaction of the public, party officials, big donors, etc.,” Greene said. “I can imagine a surprisingly tepid response would dissuade other Trumps, but a tepid response would, indeed, surprise me. If any one of them sticks a toe in and gets a strong response, that would surely encourage others.”

Greene added, “As long as the Republican Party is Trump’s Party—and it very much is now—the Trump name and the Trump brand can be very valuable to other family members seeking political office.”