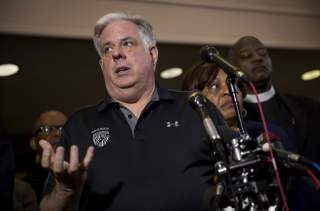 Maryland Governor Larry Hogan is not content with having won reelection. He is now flirting with a potential run for president in the Republican primary in 2020. Neoconservatives, who have been searching far and wide for a plausible candidate, are ecstatic. Last week, New York Times columnist Bret Stephens touted Hogan’s chances, declaring that he “is one of the few who can offer a serious and meaningful alternative to the corroded conservatism we have in Washington today. Stepping forward now would mean stepping fully into his father’s shoes.” His father Lawrence Hogan, a Republican congressman, helped launch impeachment proceedings against Richard Nixon, a fact that Larry alluded to in his second inaugural address a few weeks ago.

Hogan is the first Maryland Republican to win a second term in over sixty years. His record is not that of a traditional Republican conservative. While in office he’s passed increased gun control measures, banned hydraulic fracking in Maryland, declined to vote for Donald Trump in 2016 (instead writing-in his father), and has voiced support for the Paris climate agreement and Deferred Action for Childhood Arrivals (DACA). He’s also opposed to making abortion illegal. He is slated to become chairman of the National Governors Association.

What are his prospects for the Oval Office? “He mostly has been known as an extremely popular Governor, despite the fact that he’s a Republican in an overwhelmingly Democratic state, and someone who has a pragmatic ‘get it done’ attitude to the business of government…He believes in balanced budgets, but at the same time he represents a wide swath of people across his state,” said Geoffrey Kabaservice, director of Political Studies at the Niskanen Center. “He’s been able to get along with people both in his own party and unite all of the factions, including the people who are very pro-Trump and the people who are not, as well as get along with Democrats in his legislature.”

The Maryland governor hasn’t been able to convince every Trump supporter. “Larry Hogan is yesterday's man, not tomorrows. He's an avatar of the failed Republican policies of the past that were promoted by the Bushes and by The Weekly Standard and that have impoverished the middle class, degraded the family, all while making their donors ever richer,” said Chris Buskirk, editor and publisher of American Greatness. Buskirk specifically mentioned Hogan’s immigration policies, which he said, “devalues middle class Americans' of their most valuable asset, which is their asymmetrical access to the U.S. labor market.”

“I’m very frustrated and concerned about the direction of the Republican Party and the country,” Governor Hogan told Bret Stephens. Kabaservice described what he thought a Hogan-esque direction would look like. “Larry Hogan is an institutionalist when it comes to the Republican Party…He’s somebody who in many ways is a kind of old-fashioned Republican, the way Republicanism used to be thought of before it became known as being extremely ideological or extremely populist…And I think a lot of people as much as anything else just want to go back to that kind of politics and that model of a Republican Party and that’s the reason they’re looking longingly in Larry Hogan’s direction,” he said.

The sixty-two-year-old Marylander isn’t the first name to be proposed as a possible 2020 stop-gap candidate against Trump. Other names include newly elected Senator Mitt Romney, or the recently retired Senator Jeff Flake and Governor John Kasich. In Buskirk’s view, “Hogan actually stands out as perhaps the worst among a claque of has-beens and dead-enders who have been tapped to challenge Trump. He has no base outside of Maryland—which he would lose in a presidential election—and the anti-Trump fanatics clustered around Bill Kristol. Republican voters want someone who shares their values,” he responded.

Kabaservice, who worries that Trump’s failure to expand his base nationally imperils his odds at reelection, contends that Larry Hogan is a much more electable candidate. “Democrats did quite well in the midterm election in those critical states that allowed Trump to gain his electoral college majority, particularly like Michigan and Pennsylvania and Wisconsin. And the worry is simply that Trump’s appeal, while it still burns very brightly among his most partisan supporters, is not sufficiently broad to carry the Republican Party back to the White House in 2020. And some of the people who are supporting Larry Hogan see the possibility of him challenging Trump as a way of broadening the Republican Party’s appeal, moving it back in the direction of being a big-tent party,” he explained.

Whether Hogan will really become the presidential candidate of the Never Trump movements is an open question. “I’ve been to the White House a number of times, and the President has always been very gracious personally to me and we’ve had to work together with the administration, and they’ve been very cooperative and good,” Hogan said last August. The governor has avoided personal insults while attempting to travel in a separate lane from the President. “A Hogan challenge would not even register as a blip. His campaign, if one occurs, should be understood as being fundamentally unserious, as just another anti-Trump vanity campaign financed and encouraged by fanatics who hate the President and who are using him just as they used Evan McMullin,” assures Buskirk. “Even if Trump didn't run, he would get more votes than Hogan.”

Buskirk rounded off his comments by describing a potential Hogan presidential campaign as emblematic of the mindset that led to Donald Trump’s election in the first place. “The Hogan 2020 buzz exists only in elite media. It tells me nothing about national politics except that the ruling class elites that have benefited so greatly from globalism and cheap labor imported from abroad have learned nothing about the needs or interests of the American middle class and still treat politics as a parlor game.”