Latin America Has a Blueprint of How to Deal with Venezuela 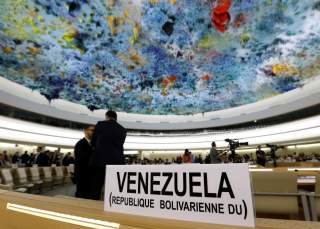 Venezuela is a traumatic and consequential crisis. The Americas have not witnesses a perfect storm of similar and simultaneous political, economic and human rights proportions in decades. There have been different proposals about how the international community can manage the situation. Latin America’s twentieth-century experience points to two significant diplomatic events—one a failure, the other a success—from which to learn about what could be done, or avoided, in the case of Venezuela.

The first example is Cuba and the 1959 Revolution. In the 1960s, the rivalry between the United States and the Soviet Union had intensified, especially after the construction of the Berlin Wall in August 1961. By then Mao Zedong's introverted China was living the great famine, which started in 1958; the European Economic Community (EEC)—a six members organization—was an incipient international actor; and the Third World was attempting to organize through the Non-Aligned Movement after the 1961 summit. The United States was indisputably the hegemonic power on the continent. For its part, the Organization of American States (OAS) did not condemn the 1961 Bay of Pigs invasion ordered by President John F. Kennedy. This very schematic backdrop allows us to locate the January 1962 OAS resolution to exclude Cuba from the inter-American system. From then on the Cold War was definitively installed in Latin America.

The mixture of bandwagoning Washington and its hardline policy of isolation and of punishment against Havana; the absence of a minimum regional concerted attempt to preserve some type of diplomatic bridge with Fidel Castro; the evident lack of strategic vision of the part of majority of the Latin American presidents; and the anti-Communist obsession among the civilian and military elites of the region had deplorable effects. For years the overriding specter of the Cold War generated deep ideological cleavages and stimulated the imposition of military dictatorships throughout the region, which would be detrimental to the welfare, stability, security and autonomy of Latin America.

The second example is the Central American crisis of the late 1970s and early 1980s. In 1983 there were three very problematic countries: Nicaragua, El Salvador and Guatemala. By then, peaceful coexistence between Washington and Moscow had ceased and the Cold War had overheated. China was still a large Third World country. The more self-centered EEC had ten members but was dealing with Margaret Thatcher’s Eurosceptic Great Britain. President Ronald Reagan launched his low-intensity war against Sandinista Nicaragua, while actively supporting El Salvador and Guatemala, which were ruined by civil wars. Cuba continued sponsoring revolution but was facing growing external and internal limits. Additionally, the inter-American system was seriously questioned because of the role of the OAS in the 1982 Falklands War.

In this context, four Latin American countries—Colombia, Mexico, Panama and Venezuela—joined efforts in January 1983 and created the so called Contadora Group with the purpose of seeking a negotiated political solution to the crises in Central America. In 1985, a support group composed by Argentina, Brazil, Peru and Uruguay were incorporated into Contadora. Despite the complex international problems in the region, the eight countries created an assertive diplomacy towards Central America. In essence, the Contadora nations understood that if things got worse, there would be a profoundly negative spillover throughout North and South America. All had individual interests at stake and shared several common principles: to prevent a rehearsal of an aggressive Cold War at home; to ensure the still fragile process of democratization in many South American countries; to contain the internationalization of existing conflicts (for example, in Colombia); and to restrain the interventionist offensive of the United States. The core aim was to attain peace and to encourage democracy in Central America.

While Contadora members had governments with varying political orientations, it did not prevent joint action. Ideology did not obfuscate the leaders of the eight countries because they understood that they were dealing with cases in which there was no ideological homogeneity: a leftist government in Nicaragua, a right-wing government in El Salvador and a far-right government in Guatemala. At the same time, the Contadora Group’s diplomatic style was characterized by averting grandiloquent speeches, rhetorical gestures and menacing threats.

Today, the world and region are immersed in dynamics that are not dissimilar to the past. The case of Cuba shows what the region must avoid. Instead, Latin Americans should emulate cooperative efforts made in Central America by the Contadora Group. This method could help to stabilize the situation in Venezuela before it is too late. Whether the states of Latin America have learned from the past or have the political will, however, remains to be seen.