Law in the Time of Endless War 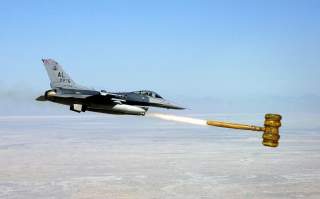 “This is, in my view, an illegal war right now.”

Senator Tim Kaine (D-Virginia) spoke those words last week, at a public event at the Cato Institute. He was referring to America’s military campaign against the Islamic State, which, as of this past Saturday, has been going on for one full year. According to U.S. Central Command, in that time the U.S.-led coalition has conducted almost six thousand airstrikes in Iraq and Syria, and 3,300 U.S. troops are currently deployed to Iraq as part of Operation Inherent Resolve.

And, as Kaine noted, Congress has yet to vote to authorize this war. Instead, the White House has argued that the Islamic State is covered under the terms of the 2001 Authorization for Use of Military Force (AUMF). That legislation authorizes the president to use force against “those nations, organizations, or persons he determines planned, authorized, committed, or aided the terrorist attacks that occurred on September 11, 2001, or harbored such organizations or persons.” At Cato, Kaine—a member of the president’s own party who serves on both the Senate Armed Services and Foreign Relations Committees—described the White House’s legal rationale as “ridiculous.”

What was most notable wasn’t the content of what Kaine said. Indeed, he has made this argument numerous times previously, starting even before the U.S. mission in Iraq and Syria began. Rather, what was most striking was the sense of resignation surrounding the event. Gene Healy, introducing Kaine, called the senator’s commitment to preserving the role of Congress in issues of war and peace “increasingly rare” and “old-fashioned.” Healy also predicted that “it’s a pretty sure bet that this unhappy anniversary will get far less public attention than the clown-car wreck of the first GOP primary debate tonight.” (He was, of course, correct.)

Kaine rightfully blasted his colleagues in Congress for their passivity and for their failure to vote on a new authorization thus far. Yet it’s the executive branch’s conduct that deserves particular attention. The United States began its operations against the Islamic State last August. The White House, as noted above, has maintained that it already has the legal authority to wage this conflict under the 2001 AUMF (and under the 2002 AUMF that authorized the Iraq War). It sent its proposed draft text for an AUMF against the Islamic State to Congress this February—six months after the operation had already started—and has not made any significant effort to try to win its passage. The Obama administration has stated repeatedly that it would welcome a vote in Congress to express support for the ongoing mission. But it has been equally clear that it doesn’t see a new congressional authorization as necessary, and that Operation Inherent Resolve will go on whether Congress votes for it or not.

So, heads, we stay at war; tails, we also stay at war. Given this choice, is it really any surprise that Congress hasn’t acted?

All of this is emblematic of the Obama administration’s larger approach to questions of law and national security. In May 2013, President Obama gave a landmark speech at the National Defense University on his counterterrorism policy. Afterward, Benjamin Wittes remarked that the “unifying theme” of that speech was that “it was an effort to align himself as publicly as possible with the critics of the positions his administration is taking without undermining his administration’s operational flexibility in actual fact.”

The use of the 2001 AUMF as the legal basis for Operation Inherent Resolve represents a classic example of this approach. Obama stated in his NDU speech that he wanted to engage “Congress and the American people in efforts to refine, and ultimately repeal, the AUMF’s mandate.” He has reiterated this pledge as recently as this year. His administration, however, has done exactly nothing toward this end. Indeed, it has since expanded the AUMF’s mandate by using it as the legal basis for its military actions in Iraq and Syria. And it has even been reported lately that Obama has authorized using force against the regime of Bashar al-Assad as well if it were to come into direct conflict with U.S.-backed forces in Syria. At Cato, Healy said that the AUMF has become “an all-purpose enabling statute for presidential wars.” It would be hard to disagree.

Or consider the prison at Guantánamo Bay. In his first week in office in 2009, Obama issued an executive order calling for the facility to be shuttered within a year. Six and a half years later, the prison remains open, with 116 detainees kept there as of this writing. Obama continues to decry the prison as a moral outrage, saying this March, for example, that “it’s not who we are as a country.” But his administration still embraces the practice of indefinite detention that is Guantánamo’s most notable characteristic. Even if Congress were to drop all of its objections and the prison were to be closed, under the administration’s own stated plans, 32 of the prisoners would still be designated for indefinite detention without charge or trial.

Or consider the U.S. intervention in Libya. In 2007, on the campaign trail, Obama said, in response to a questionnaire from reporter Charlie Savage, that “the President does not have power under the Constitution to unilaterally authorize a military attack in a situation that does not involve stopping an actual or imminent threat to the nation.” Then, in 2011, he did precisely that, ordering the use of military force for roughly half a year to help overthrow the regime of Muammar al-Qaddafi. His administration argued at the time that, as the New York Times summarized, the president “had the authority to continue the military campaign without Congressional approval because American involvement fell short of full-blown hostilities.”

Or, finally, consider the war in Afghanistan. Last December, Obama issued a statement in which he declared that “our combat mission in Afghanistan is ending, and the longest war in American history is coming to a responsible conclusion.” This year, on Memorial Day, he said that day was the first Memorial Day “since our war in Afghanistan came to an end.” But roughly ten thousand U.S. troops remain in Afghanistan, conducting counterterrorism operations, among other things. And the pace of America’s planned drawdown has been delayed, with that number to remain there through the end of 2015.

Even more striking, as Wittes and Cody Poplin perceptively observed, is the fact that other executive-branch agencies have continued to insist that we are indeed at war in Afghanistan. In one instance, in response to a Guantánamo prisoner’s lawsuit, which claimed that if the war in Afghanistan had ended, the U.S. government no longer had the right to detain him, the Justice Department replied that “the United States currently remains in an armed conflict with al-Qaeda, Taliban, and associated forces.” Obama’s statements, the Justice Department went on, “signify a transition in United States military operation, not a cessation.” Likewise, in April, Stephen Preston, then the Defense Department’s general counsel, said in a speech:

Although our presence in that country [Afghanistan] has been reduced and our mission there is more limited, the fact is that active hostilities continue. As a matter of international law, the United States remains in a state of armed conflict against the Taliban, al-Qa'ida and associated forces, and the 2001 AUMF continues to stand as statutory authority to use military force.

To sum up: according to the U.S. government, we are no longer at war in Afghanistan, except that 1) we have military troops in that country, 2) some of them are employing lethal force, and 3) as a legal matter, we are still in an “armed conflict” with multiple groups there. Call it Schrödinger’s war.

Most of the legal issues mentioned above—and others, such as the debates over the National Security Agency’s mass-surveillance programs—stem from one overriding policy problem. That problem, in short, is the inability to either win or otherwise end the “war on terror.” The U.S. government believes that it needs to fight this war well into the foreseeable future, and that there are a large number of terrorist groups against which it needs to use military force. In this course of waging this conflict, a whole host of thorny legal questions are naturally raised: What groups can we target with lethal force? Which people can we detain, and under what circumstances? And against whom can we conduct different kinds of surveillance?

President Obama takes pains to try to assure his critics that he understands the risks of permanent war. In his NDU speech, he said that “a perpetual war...will prove self-defeating, and alter our country in troubling ways,” and he quoted James Madison’s warning that “no nation could preserve its freedom in the midst of continual warfare.” Yet, under his leadership, we seem to be fighting one anyway. Ray Odierno, the U.S. Army’s chief of staff, stated just last month that in his judgment, the fight against the Islamic State could go on for another ten to twenty years.

The fact is that all of the political incentives that presidents currently face tilt in favor of encouraging them to use military force—as long as it doesn’t involve long-term commitments of ground troops. Killing suspected terrorists is politically popular and relatively low-cost. Compare the reaction to the undeclared war against the Islamic State with the reaction to the recently concluded nuclear agreement with Iran. The Iran deal has sparked ferocious opposition from Congress, while the one-year anniversary of America’s campaign against the Islamic State passed with little public notice. Congress has been unwilling to vote on Operation Inherent Resolve, but has been more than happy to watch the president conduct it without a vote. It should be little surprise that he has done just that. And the same political incentives that incline presidents to use military force also sometimes lead them to adopt, let’s say, creative legal rationales in support of their security policies.