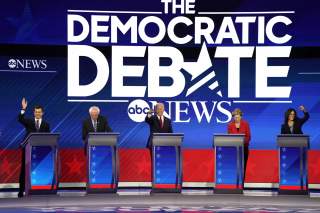 Even as Rand Paul and Liz Cheney are embroiled in a vicious feud—Paul called her a “warmonger” and Cheney declared that he puts “terrorists first”—the Democratic Party held a single presidential debate that was tame in contrast with the fireworks on the Republican side.“The candidates don’t have Donald Trump’s charisma. Their best hope is that after four years of Trump, voters are sick of charisma and drama,” said James Antle, editor of The American Conservative.

The first topic discussed is also the one that opened the biggest so-called rift among the candidates: healthcare. Both Sanders and Warren defended their Medicare for All plans against Biden’s less expensive, less inclusive proposal.

“Elizabeth Warren’s refusal to answer the central question about where she will find the money for her healthcare plan must be addressed quickly or it will only grow into an issue of being deceptive, not the sort of thing she needs because it reminds voters of her false ancestry claims,” said Doug Wead, an author and political commentator who has been involved in ten presidential campaigns.

Both Warren and Sanders are considered progressive alternatives to Biden. While seemingly fighting over the same section of voters, both senators have been hesitant to attack the other directly, instead more often tag teaming on mutual policy stances. This contributes to the lack of fireworks during the debate. Several moderate candidates felt the need to thank Sanders for his efforts on healthcare, rather than criticizing the plan they disagree with.

Biden has come under fire for what some have referred to as “gaffes,” and others as signs of cognitive decline. These include forgetting what state he’s in, forgetting the name of former President Barack Obama, fabricating detailed stories, or claiming he opposed the Iraq War.

This was addressed during the debate when Castro, a fellow Obama cabinet alum, challenged Biden for what he considered contradictory answers on health care. “Are you forgetting what you said already two minutes ago?” berated Castro at the seventy-seven-year-old front runner. This attack, one of the only combative moments of the night, received jeers from the audience, and disdain from media commentators. It’s unknown how it will affect standing in the polls, where Castro is averaging at one percent.

“My guess is that Joe Biden has some serious problems, that his tendency to forget and make mistakes will become an accumulative problem that will not get better, only worse,” said Wead.

On trade with China, the candidates were uniformly critical of President Trump’s strategy of economic warfare, but likewise were reticent to say they’d immediately remove his tariffs on Chinese goods.

“We’re not going to bomb our way to a solution in Afghanistan,” she said.

Buttigieg, who served a tour in Afghanistan, said it wasn’t necessary for U.S. security to be involved in permanent, open ended occupations. He reiterated his proposal that all Authorizations for the Use of Military Force have an automatic three-year sunset unless renewed by Congress. Although in a post-debate interview he pushed back against Warren’s plan for immediate, unilateral withdrawal.

“We don’t need those troops there, I would bring them home,” said Biden, after giving a running list of things the United States could do to help the situation, including closer cooperation with Pakistan.

The former vice president repeated his regret regarding his 2002 vote in support of the Iraq War. “The AUMF, he [former President George W. Bush] said, to go in and get the security council to vote fifteen to nothing to allow inspectors to go in to determine whether or not anything was being done with chemical weapons or nuclear weapons,” Biden said. This is false. The AUMF was meant to give the president authority to use military force against Iraq, which was stated by both the Bush administration at the time and then-senator Biden.

Seeing an opening, Sanders used the opportunity to contrast himself with his fellow septuagenarian. “The truth is, the big mistake, the huge mistake, and one of the big differences between you and me, I never believed what Cheney and Bush said about Iraq. I voted against the war in Iraq, and helped lead the opposition,” Sanders said. He also mentioned he had voted against all three of President Trump’s military budgets, a subtle swipe at Warren, who voted for two of them.

Moderator Jorge Ramos ensured special focus was given on Latin America, where Sanders criticized the comparison between his politics and the Maduro regime in Venezuela. Castro promised a Marshall Plan for Central America, while Biden reminded people of his own Central American “alliance for prosperity” efforts.

“The big thing is that there is no clear-cut second place candidate—Elizabeth Warren and Bernie Sanders are splitting that role—and Kamala Harris has so far failed to crack Joe Biden’s hold on black voters,” concluded Antle. “Until that changes, Biden can talk about record players or whatever and still remain in first place.”