Leave No Prisoners of War Behind—Even in Space? 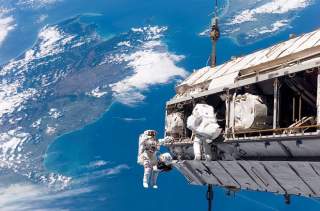 The U.S. military devotes a great deal of effort to recovering its personnel who are stranded behind enemy lines. From raids on Japanese prison camps to plucking pilots from North Vietnamese jungles and Serbian forests, American soldiers and the American public, have come to expect that no effort will be spared to rescue U.S. personnel.

But what if that hostile territory is outer space? That's the question asked by U.S. Air Force Lt. Col. Colonel Mari Manifold, who argues that the Pentagon needs to begin considering how to rescue astronauts in the same way that it rescues pilots.

As humans increasingly use space, some have speculated that an adversary could grab American astronauts by docking onto and capturing their spacecraft, or hijacking it by electronic means. "Alternatively, if the U.S. military takes over LEO [low Earth orbit] and holds it by emplacing outposts of astronaut-soldiers as human trip wires, other countries could challenge this action by commandeering the outposts and taking U.S. occupants prisoner," Manifold writes in the Air Force's Air and Space Power Journal.

"The purpose of taking prisoners in space would be the same as doing so on Earth: to weaken national will, degrade the US image domestically and internationally, influence international partners to withdraw from US-backed coalitions or alliances, and gain concessions, all the while limiting strategic freedom of movement. If the United States cannot successfully sell its strategic narrative on why it is in space, then public support for US space operations could wane."

Manifold suggests that rather than the Pentagon creating its own space hostage rescue force, the U.S. should have a Civil Reserve Space Fleet, consisting of private space companies like SpaceX and Orbital Sciences. The concept would be similar to the Civil Reserve Air Fleet, in which commercial airlines are contracted to provide aircraft for military purposes during an emergency.

"These companies would supply the flight crew, and the military would provide the rescue team," says Manifold, who believes a space rescue force should be created right now in case we need to save the astronauts on the International Space Station.

But before we spend billions on a galactic Delta Force, the first question we need to ask is… save astronauts from what? From SPECTRE? With its alligator-jawed space vessels that swallow entire spacecraft and bring them back to Earth, the nefarious criminal organization and arch-enemy of James Bond is the only power to date that has demonstrated a capability to capture astronauts in space. Otherwise, daunting indeed are the mechanics of capturing or boarding a ship orbiting the Earth at 17,000 miles an hour—and manned by a crew that can do all sorts of interesting tricks to frustrate boarding parties, from changing their spacecraft's speed and altitude to illustrating that explosive depressurization is a force not to be trifled with. Not to mention arming spacecraft to repel boarders, such as the Soviet Union's 1970s space cannon, a zany idea that perhaps wasn't so zany after all.

And how would prisoners be retrieved without killing them? "Training and research would mitigate rescue team difficulties with unfamiliar equipment and safety considerations regarding breaching and the use of lethal force in pressurized space containers," writes Manifold. But in space, the biggest enemy isn't a gun or missile: it's an environment where Mother Nature is lethal and unforgiving under the most peaceful conditions, let alone when there are whizzing bullets that can puncture your spacesuit in a vacuum (as vividly demonstrated by SPECTRE and their nemesis, the U.S. Space Marines, a space firefight would be a bloody affair). Manifold believes that a U.S. space hostage rescue capability would deter aggressors from attempting to capture American astronauts. Actually, the best deterrent is the laws of physics.

Nonetheless, when it comes to space travel and science fiction, there is a fine line between the ridiculous and the prescient. The idea of capturing and rescuing prisoners in space is more premature than fanciful. Some day, technology may very well progress to where such operations are feasible.

But right now, there are precisely six human beings in space, all on the same space station. It will be probably be at least a decade before American space program returns to orbit via their Orion spacecraft, while Russia's space program is going broke and China's is just emerging. Anti-satellite weapons have been demonstrated and deployed; the capability to destroy spacecraft is a technological fact. But that's very different than capturing spacecraft without destroying the people inside.