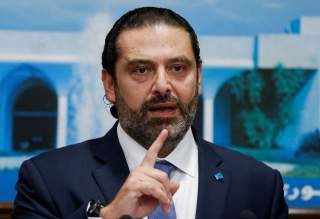 It started with a $13 million gift to a South African supermodel mistress and it ended with a resignation amidst nationwide protests. This has been a bad month for Prime Minister Saad Hariri—but he may be able to use his misfortune against his political enemies.

“I place my resignation at the discretion of the President of the Republic,” he said in a statement, beginning in formal Arabic but continuing in a more folksy Lebanese dialect. “Officials come and go, the important thing is the country’s peace and dignity. And there is nobody more important than his country.”

Hariri’s resignation puts the ball in his rivals’ court. Militia leader Hassan Nasrallah’s Hezbollah, Speaker of Parliament Nabih Berri’s Hope Movement, and President Michel Aoun’s Free Patriotic Movement are now left in government, while Hariri’s Future Movement can watch from the sidelines as they struggle to quiet an uprising that began on October 17, when the Lebanese parliament proposed a tax on all online voice calls as a short-term fix to a looming budget collapse. It was the capstone to a summer of economic and social disasters, with Hariri’s multimillion-dollar affair serving as the rage-inducing symbol of a rotten political class.

The honey-for-money affair “reinforced the perception that he was part and parcel of the political elite’” and “the belief that his whole system is rotten and corrupt,” explained Randa Slim, founding director of the Initiative for Track II Dialogues at the Middle East Institute.

“The resignation itself could be a form of leverage because the president could decline to accept his resignation, ask him to stay on,” said Middle East Institute president Paul Salem. “Nasrallah and Hezbollah basically stand behind this government, so indirectly its authority is being challenged.”

Without Hariri—heir to a Saudi-linked business empire worth billions—the remaining ruling coalition may have trouble making necessary economic reforms, as Hezbollah is under U.S. terrorism sanctions isolating it from the international economy. The four parties—Hezbollah, the Hope Movement, the Free Patriotic Movement and the Future Movement—formed a government three years ago as part of a deal to end political gridlock, but it has been an uneasy alliance. After all, Hezbollah is accused of murdering Hariri’s father, a polarizing figure in his own right, in 2005.

In the hours leading up to Hariri’s resignation, a mob aligned with Hezbollah and the Hope Movement—normally rivals for the country’s Shi’a Muslim constituency—had attacked protesters in downtown Beirut. The incident marked the first major violence associated with the protest movement. Now, a protest movement with a motto that began as “everyone means everyone” may find the targets of its wrath have narrowed significantly.

“Although Hariri was less criticized by the protestors he is responsible too,” said Ohannes Geukjian, acting chairperson of the Department of Political Science and Public Administration (PSPA) at the American University of Beirut. “More criticism was directed to Aoun's ruling circle, including Foreign Minister Gebran Bassil, who is the leader of the Free Patriotic Movement and son in law of Aoun.”

Another popular slogan of the initial protest movement was a vulgar reference to Bassil’s mother.

"Hariri was the weakest link in that whole ruling coalition," Slim told the National Interest. "There has been a shift from a focus on specific individual to the whole system."

This is not the first time Hariri has resigned as prime minister. On a November 2017 trip to Saudi Arabia, where Hariri has significant business connections, he resigned in a bizarre appearance Saudi state television. The ruling Lebanese coalition accused Saudi authorities of kidnapping Hariri, and refused to recognize his resignation.

“A lot of the politics were, and still are, individually driven in the Arab region,” she told the National Interest. “We are seeing the maturation of the streets at a much higher level than 2011.”

In fact, the protests have not been directed at a specific sect. Lebanon’s “confessionalist” system assigns government posts to various sectarian communities. The protesters, in large part, demanded an end to that system.

The protesters’ first two demands, according to Slim, were Hariri’s ouster and “the formation of a technocratic government,” made of “independent, nonpartisan experts widely respected by society.”

“Initially the protests were genuine and many Lebanese from different cities and areas participated,” Geukjian said. “The protests were unprecedented because they were cross-sectarian, irrespective of sectarian belonging and had no leadership.”

However, divisions began to appear when the Lebanese Forces resigned from the government on October 20. The Lebanese Forces competes with the Free Patriotic Movement and the Kataeb Party for the large Maronite Catholic constituency.

But ultimately, the demonstrations remain about the “lack of providing the public goods and services to people, taxation, corruption, high rates of unemployment, nepotism, lack of governance, lack of accountability and unequal distribution of the wealth in the country” due to the “sectarian distribution of posts in the various institutions of government irrespective of eligibility, education and skill,” Geukjian claimed.

Over the past few months, Lebanese people have watched the catastrophic effects of such political dysfunction. Banks ran out of physical U.S. dollars as the Lebanese currency went into freefall. Gas stations shut down. Authorities fumbled the response as forest fires spread across the iconic Mount Lebanon.

Despite the seriousness of the crisis, the initial protests were playful. DJs turned demonstrations into electronic music raves. Demonstrators formed a human chain across the length of the entire country. Protest signs featured Internet memes and offers for free hugs. Couples proposed to each other amid the chaos.

And when a frightened child was caught in the middle of one demonstration, the protesters sang Baby Shark to cheer him up.

But the violence preceding Hariri’s resignation was a darker turn of events as both sides dug in.

“What tactics can the protesters use to increase pressure on the governing coalition?” Slim asked. “What can they do to deny the protesters to continue their movement?”

“Can it remain limited? I don't know. This is Lebanon. Things can get out of control,” she concluded.