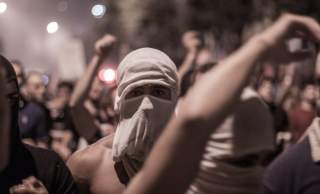 After more than a month of garbage piling in the streets of Beirut, the city finally broke. Organized by the #YouStink campaign and other groups on social media, tens of thousands of protesters marched demanding a solution to the crisis. Last Saturday, on August 22, the protestors were met by tear gas, water cannons, rubber bullets and live fire from riot police and security forces. On Sunday, though the police showed more restraint, the protesters’ demands escalated. They amassed in Riad al-Solh square chanting, “The people want the fall of the regime”—referring to the parliament that had again unconstitutionally extended its term last November. This past weekend saw even larger protests, and the #YouStink organizers said they would give the government until this past Tuesday to meet their demands: The resignation of Environment Minister Mohammad Machnouk, the Minister of Interior holding police accountable for violence, new parliamentary elections and a solution to the garbage crisis. So far, the government has met half of one demand. Machnouk announced that he would not step down, but would instead withdraw from the committee tasked with finding a solution to the crisis. This hardly pacified the crowds, and #YouStink staged a sit-in in the offices of the environment ministry that resulted in arrests and injury to demonstrators.

Lebanon’s troubles go far deeper than an unresolved garbage crisis. The country’s current problems are rooted in its flawed foundational institutions that have resulted in division and deadlock. This paralysis has protected the corrupt leaders and warlords-turned-politicians who control the country and leaves Lebanon unable to guarantee basic services for its citizens.

Lebanon’s confessional system, a legacy of French colonialism, proportionally allocates political power among its predominant religious communities. While this was intended to prevent sectarian strife by giving each religious group their share, it was and remains a failure. The constitution institutionalized sectarianism where none needed to exist, leaving Lebanon’s political entities divided along religious lines. With religion and politics fused, the attitude prevails that one should “stick with” his or her co-religionists. The Free Patriotic Movement (FPM), the Lebanese Forces and the Phalanges Party claim the Maronite Christians; the Future Movement claims the Sunnis; the Amal Movement and Hezbollah claim the Shiites; the Progressive Socialist Party claims the Druze; and so on and so forth. The assumption is that these factions will represent the needs and interests of their respective religious groups. When these needs are not met, the failures are blamed on the obstinacy and intransigence of another sect.

Though the 1989 Ta’if Accord brought an end to the civil war by offering Sunnis and Shiites greater representation and rebalancing the confessional system, it left the government paralyzed. Parties that had barely stopped fighting were reluctant to work together, and with Muslim and Christian representation more balanced, they were able to block one another’s efforts and blame the failures on the other. While parties today do on occasion work together across sectarian lines out of necessity, all political activity in Lebanon is marred by mutual distrust among factions. Rather than the foundation for national unity, the Ta’if Accord merely serves as a prolonged ceasefire, and by and large the impasse continues.

The failures of the stagnant government are wide ranging to say the least. Lebanon has failed politically, now going fifteen months without a president due to the major parliamentary blocs’ inability to agree on which Maronite should fill the position. It has failed in crisis management, refusing to establish formal refugee camps, even though the country now hosts over one million Syrian refugees—about a fourth of the Lebanese population. This has created a massive urban refugee problem not only in Beirut, but also in towns and villages throughout the country. It has also failed in providing basic services. Lebanon suffers from a water-scarcity problem despite having an abundance of water; the electricity crisis has made daily power cuts a way of life; and after weeks of accumulation, Beirut’s trash has piled in the streets, resembling miniature replicas of Mount Lebanon. The government had full knowledge that the Sukleen garbage company’s contract had expired and that it would stop collecting, yet took no real steps to come up with an alternative.

In response to the government’s inability to provide basic services, private companies have stepped in with generator services for electricity along with efforts to privatize water distribution. With the private sector fulfilling the roles of the government, corruption is rampant. Many of those involved in what has been called the “generator mafia” are actually in the government or connected to it. They have lobbied the state not to improve public services and have even taken more drastic measures by sabotaging infrastructure when their control over electricity markets is jeopardized.

The cost of this corruption, both financial and emotional, is borne by the Lebanese people, and though they have endured one failure after another, the unresolved garbage issue proved to be too much. Despite the harsh response by security forces, the #YouStink protesters and others continue their demonstrations demanding more than a quick fix to the garbage problem. Though dozens have been injured, and one protester was even killed, there is a silver lining to the unrest: The people of Lebanon are facing the same issues, regardless of their religious affiliation.

These shared crises certainly have not completely unified the population. It is true that the system has failed members of some sects more than others—notably Shiite residents of southern Beirut who have more limited access to services. (As such, rumors that supports of the Shiite Amal Movement have engaged in violence at the front protests are not surprising, especially after the police had already responded to peaceful protests with force.) Others have also injected partisan politics into the issue. Hezbollah and the Maronite-dominated FPM’s ministers walked out of cabinet meeting discussions on new bids for garbage collection last Tuesday, citing exorbitantly high costs of the new tenders—a move the Associated Press said would encourage further protests. Is it true that many of the bids in consideration were even higher than the previous contract the government had allowed to lapse, thus justifying the walk-out? Yes. Is it also true that both Hezbollah and the FPM stand to benefit if Prime Minister Salam is forced to step down? Again, yes. But winning partisan gains for these parties is not what brought people to the streets. The #YouStink movement and others came together across sectarian lines and, at least on this issue, Lebanese youth of all religions are working together to face the challenge. The more than ten thousand that protested this past weekend did not carry Hezbollah flags, Amal flags, FPM flags or Future flags. They carried the Lebanese flag.

#YouStink is not likely to bring total upheaval to the confessional system. Depending on how the protests progress, it may get PM Salam to step down; it may even achieve long-overdue parliamentary elections. Such changes, however, will not solve the fundamental problem at the core of the Lebanese state: institutional sectarianism and mutual distrust that results in paralysis. The political factions still have their fervent supporters, and fear of the other will protect the status quo. Nevertheless, movements like #YouStink—especially peaceful ones—should be encouraged. Young people working together across religious lines for a common goal will begin to erode the perceived differences that inhibit national unity. There are organizations and programs in Lebanon that work with youth of all religions to foster cooperation and a nonsectarian approach—from the Sustainable Democracy Center, to Forum ZFD, to Nahnoo—but these programs are woefully underfunded, and they face an uphill battle trying to build cohesion from the ground up, in spite of the poor example set by the state. Those trying to encourage these values should be strengthened and supported for Lebanon to see a better future. Otherwise, the country will remain in the garbage.