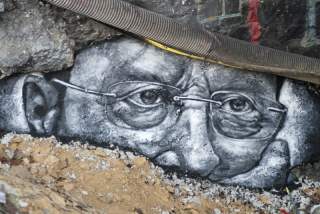 Following two and a half years of political deadlock that left Lebanon with no president, parliamentarians elected a Hezbollah-aligned leader as head of state this Monday. It is a stunning political development, even for a country long infamous for its complex web of sectarian politics, Faustian bargains and foreign meddling in its domestic affairs. More importantly, it allows Iran the opportunity to consolidate its grip on this Mediterranean nation, bolstering its regional influence at the expense of the United States and its allies.

The story of how Michel Aoun became president is emblematic of dynamics throughout the Middle East. Western-leaning politicians in Beirut, led by former prime minister Saad Hariri, enjoyed a parliamentary majority and have long opposed Aoun’s election. They insisted that legislators fulfill their constitutional duties by attending parliament and electing a president. Instead, Hezbollah and its allies boycotted and paralyzed state institutions, until Hariri finally acquiesced.

In this war of political attrition, the Western-leaning majority could have prevailed over the illegal obstructionism of Iran and its allies—but they were abandoned and systematically deprived of meaningful political and financial support. While Hezbollah leader Hassan Nasrallah repeatedly boasted about the bountiful financial and military assistance his party is receiving from Tehran, Hariri was left unable to pay even the salaries of his own staff.

Local factors, including political incompetence and financial mismanagement, surely played a role, but it was the undeniable withdrawal of foreign backing that resulted in such a remarkable reversal of fortunes. With the Obama administration widely perceived as accommodating Iranian encroachment throughout the region, and a Saudi leadership preoccupied with internal reforms and the war in Yemen, Hariri and his allies were practically forced to cut a deal. To survive they had to accept becoming Hezbollah’s junior partners in running the affairs of the Lebanese state.

As part of the deal, Hariri will likely be named prime minister and his coalition will be allotted important ministries, but that will probably not materialize before a protracted process by which Hezbollah and its allies extract further concessions. Their chief objective, through controlling the key levers of power, will be to assure that Lebanon’s state institutions are unable to check Iran’s growing domination.

From here on, the challenge for American and Arab policymakers will be in determining how to deal with a captive state that has come under the control of a group they deem to be a terrorist organization. It is a significant setback, but all is not lost, and they can still help balance the playing field.

Aoun is a pragmatic, if sometime impulsive, figure with a long history of shifting allegiances. As president, his interest will be in governing successfully while demonstrating that he is the uncontested leader of Lebanese Christians. He is undoubtedly aware that Iran and Hezbollah can undercut his presidency, but nonetheless he should be given the opportunity to recalibrate his positions, all while being reminded of the consequences should he decide otherwise.

Aoun commanded the Lebanese Armed Forces before his reincarnation as a politician. He has cultivated an image of being a staunch defender of the military, which the United States supported to the tune of over a billion dollars over the past decade. It would be a significant setback for his presidency should the incoming U.S. administration, presumably under pressure from Congress, decide to scale back or suspend its military assistance.

Similarly, Congress recently passed legislation mandating that the U.S. Treasury Department cut every Lebanese bank found to be servicing Hezbollah or any of its numerous related organizations off from the international financial system. Beirut banks were eager to comply—until a car bomb targeted the headquarters of a major bank in June. Since then, a mechanism has been devised to accommodate some of Hezbollah’s concerns. A more stringent enforcement of the law by the Treasury Department could inflict major damage on a highly dollarized Lebanese economy that is dependent on an outsized financial sector.

Some will argue that threatening the withdrawal of U.S. support runs counter to U.S. strategic interests. They will stress that Lebanon is already under immense pressure due to the rising tide of Sunni extremism and almost two million Syrian refugees on its soil. Instead of withholding support and enforcing sanctions, they will assert, Washington would do well to help prevent Lebanon from collapsing into another failed state in a dangerously turbulent region.

The problem with such argumentation is that, while Washington has no interest in Lebanon’s demise, it ignores that it is up to Lebanon’s leaders to chose the path towards their country’s salvation. Meanwhile, the incoming U.S. administration, coordinating closely with Congress, must present a President Aoun and a Prime Minister Hariri with tough policy choices. The fate of Lebanon will ultimately depend on their decisions, not Washington’s.

Lastly, Lebanon is part of a larger ecosystem in which Iran is gaining ground. Unless politicians in Beirut see a determined American effort to check Iranian power, they are unlikely to change course. This must entail a comprehensive strategy to extract a price from Tehran for its illegitimate use of paramilitary forces throughout the region, whether in Lebanon, Iraq, Syria or Yemen. Failing to do so will further undercut Sunni moderates like Hariri, and it will fuel support for hardened Sunni extremists, the likes of Al Qaeda and the so-called Islamic State, as they take up the fight against Shia Iran. With no credible Sunni partners to speak off, America’s counter-extremism efforts will almost certainly be doomed to failure.

Firas Maksad is an adjunct professor at George Washington University’s Elliott School of International Affairs. He is also director of Global Policy Associates, a DC-based political consultancy focused on the Middle East.