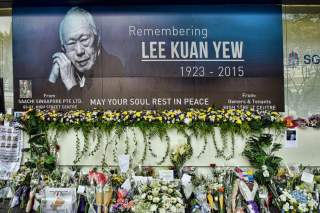 As the debates rage along the Potomac regarding the Iran nuclear framework, ISIS, the Ukraine crisis, the rise of Chinese power and a half dozen other important U.S. foreign policy challenges, how better to think about these problems than to seek council from the two most impressive strategists of the post World War II era – the late Lee Kuan Yew and Henry Kissinger.

Lee and Kissinger were born a few months apart in 1923, Lee in Singapore and Kissinger in Furth, Germany. Both had deeply traumatic experiences in their teenage years. At 18, about to enter University, Lee watched Japan invade Malaya and conquer Singapore in less than two months, ending the myth of British Imperial invincibility and of white men’s genetic superiority over Asians.

He lived under brutal Japanese occupation for four years. The Japanese introduced the system of "Sook Ching,” "purge through purification" in Chinese, to get rid of those deemed to be anti-Japanese. The Sook Ching Massacre claimed the lives of between 25,000 and 50,000 ethnic Chinese in Singapore and Malaya. These men were rounded up, taken to deserted locations around the island and systematically killed.

Japanese soldiers patrolled the streets during occupation and residents had to bow to them when they passed by. The occupation had a life changing impact on young Lee, who recalled being followed by Japanese security personnel, and slapped and forced to kneel for failing to bow to a Japanese soldier. This is the barbarous environment in which Lee Kuan Yew lived between ages 18 and 22. As he stressed, “I learned about power long before Mao Zedong wrote that power came from the barrel of a gun.”

As a boy in Furth, Germany, Henry Kissinger watched the rise of Hitler and Nazism. As one of his childhood friends said, "You can't grow up like we did and be untouched. Every day there was slurs in the streets, anti-Semitic remarks, calling you filthy names." He and his family fled Germany in 1938 to the United States when he was 15. He was 22 years old in 1945 when the World War II ended and many of his relatives in Germany had been murdered in Nazi gas chambers.

Thus both of these towering strategists came to understand at an early age in the most tragic possible way the endemic evil capacities of the human species; the frequent inability of “civilized forces” to anticipate and to counter such monsters; and the deadly effects on ordinary people of these savage regimes.

With their cataclysmic personal histories, it is perhaps unsurprising that the two men brought a sense of vulnerability to their adult lives, and came to conclude that the first protection that both responsible governments and ordinary people had against such malignant forces in the world could not be hopeful expectations based on man’s idealistic humanity to man.

They judged that such protection could not be furnished by pious declarations like Neville Chamberlain’s at Munich or those made frequently by every American president. It could not be based only on the rule of law, which disappeared in Germany in 1933, was never present in Imperial Japan and today exists in neither China nor Russia nor Iran. It could not be reflective of public opinion polls when in the late 1930’s most Americans believed the United States should stay out of the European war, and today when the clear majority would like the U.S. to disengage from current Middle East conflicts even though ISIS lacks not the genocidal will but only the industrial-sized extermination machine of the Third Reich.

Having this historical and moral framework, Lee was persuaded that peace and prosperity is not the innate order of things. Regarding the future of Singapore he put it like this, “I was also troubled by the apparent overconfidence of a generation that has only known stability, growth and prosperity. I thought our people should understand how vulnerable Singapore was and is, the dangers that beset us, and how we nearly did not make it. Most of all, I hope that they will know that honest and effective government, public order and personal security, economic and social progress did not come about as the natural course of events.”

Henry Kissinger has stressed and Lee Kuan Yew many times endorsed the proposition that maintaining in a determined and sustained way “a balance of power that enforces restraint where rules break down,” to quote Kissinger, has given the world whatever order it has enjoyed since the 17th century.

With this geopolitical compass, Lee was profoundly pro-America. This was not because he concluded that the U.S. has a flawless society. Quite the contrary. He understood very well the many shortcomings of the U.S. governmental system and the inequalities that still plague American life.

But he was convinced that only the United States could maintain the balance of power in Asia in a fashion that preserved Singapore’s freedom of choice regarding its domestic political, economic and social arrangements and its international policies. In Lee’s mind there were no candidates in Asia or in the world except the United States to take on this essential strategic responsibility.

Lee had this preeminent strategic conviction in the 1960s and 1970s when he supported the U.S. military involvement in Vietnam because he thought that it gave Southeast Asian countries a decade of breathing space to build their defenses against internal and external Communist coercion. He had it throughout the Cold War as he endorsed U.S. balance of power policies in Asia to thwart aggressive Soviet designs.

And he had it in the context of the rise of China. He believed that, of course, China wished to erode American primacy and to replace the United States as the most powerful nation in Asia. LKY took that for granted. Knowing the Chinese leadership over decades better than any other outsider, he did not look to Beijing to alter that grand strategy.

Rather, he encouraged the United States to pursue policies that made such Chinese long-term hegemonic objectives impossible to accomplish. That is, he urged Washington to maintain the balance of power that had brought peace and prosperity to so many nations and benefited billions of ordinary Asian citizens.

When asked what leaders he most admired, Lee named former French President Charles de Gaulle, "because he had tremendous guts," Deng Xiaoping for executing China's rise, and Winston Churchill, "because any other person would have given up." Notice that all three of these great men, like Lee and Kissinger, personally witnessed the catastrophic results of the collapse of the balance of power in Europe and in Asia.

Is it any wonder then that Lee Kuan Yew and Henry Kissinger were close friends for six decades and that the 91-year-old Kissinger traveled across the globe to attend Lee’s funeral. Kissinger observes, "I have had the privilege of meeting many world leaders over the past half-century; none, however, has taught me more than Lee Kuan Yew." The feeling was mutual.

Robert D. Blackwill is Henry A. Kissinger Senior Fellow for U.S. Foreign Policy at the Council on Foreign Relations, and a member of the Board of the Belfer Center for Science and International Affairs at Harvard Kennedy School. He is the co-author with Graham Allison of Lee Kuan Yew: The Grand Master's Insights on China, the United States, and the World.