The Legacy of Jeff Sessions 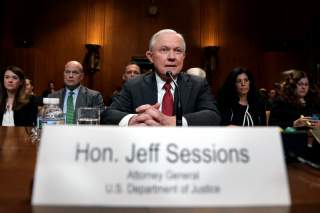 Here’s a proposition it’s hard to argue against: Edwin Meese is the person best positioned to assess Jeff Sessions’ tenure as attorney general of the United States because he is one of the best lawyers to ever to serve in that office.

And Meese gives Sessions two thumbs up, saying that he served “with distinction” and “restored integrity to the Justice Department.” One of Sessions’ main accomplishments, Meese noted, was the department’s “renewed emphasis on fighting violent crime, illegal immigration, and the drug epidemic.”

Meese is not alone in his assessment. Former Attorneys General William Barr and Michael Mukasey have also opined that Sessions was “outstanding” in his role.

Sessions served as attorney general for the almost two years. In examining his record in office, it is important to understand the handicaps he encountered when he was sworn in on Feb. 8, 2017, and that he endured for most of his tenure.

First of all, the prior occupants of that office, Eric Holder and Loretta Lynch, had deeply politicized the department, almost turning it into a partisan arm of the White House. As John Fund and I wrote in our 2014 book about Holder’s mismanagement of the department, one of the career lawyers who had served in the Clinton, Bush, and Obama administrations told us that he thought Holder was “the worst” attorney general since John Mitchell. Loretta Lynch continued Holder’s disastrous policies unabated.

Upon entering the Justice Department, Sessions discovered that—civil service rules notwithstanding—its career ranks had been heavily populated with political allies and cronies of the Obama administration. In trying to carry out his duties, Sessions faced constant internal opposition from those lawyers.

Holder had overseen the most reckless law enforcement operation in the department’s history, Operation Fast and Furious. This misguided program allowed two thousand weapons to be smuggled across the border and into the hands of dangerous Mexican drug cartels. It led to the death of a U.S. Border Patrol agent.

Second, Jeff Sessions had to operate for most of his tenure without the key officials needed to run the country’s largest law enforcement agency. Four major divisions—Criminal, Civil, Civil Rights, and Environmental—carry out the department’s law enforcement duties. Due to partisan obstruction in the Senate, the assistant attorney generals nominated to head these divisions did not get confirmed until July 11, August 28, October 11, and October 11, 2018, respectively. Sessions also had the help of Rachel Brand, the Associate Attorney General (the number three slot at the Justice Department) for only a little more than eight months before she left for a job in the private sector.

Despite those handicaps, Sessions restored integrity in the operations of the department and changed the misguided course set by the prior administration. There are numerous examples of this.

For instance, Sessions ended the department’s abusive practice of negotiating settlement agreements that forced defendants in civil or criminal investigations to make payments to third party organizations with no connection to the investigations. This tactic had allowed the Obama administration to channel funds to allied liberal advocacy groups. Sessions banned letting settlement funds go to anyone other than victims or the U.S. Treasury.

Similarly, he enhanced government transparency by ending the prior administration’s practice of evading the notice and comment process required under federal law for proposed regulations. He told DOJ lawyers they could no longer treat so-called “guidance documents” as the applicable law in any civil enforcement litigation.

What else did he accomplish? He restored the Justice Department’s relationship with state and local law enforcement, which had been severely damaged by the adversarial attitude of the prior administration. The fear of unjustified attacks by the department was interfering with the ability of law enforcement to do its job protecting the safety of the American people—an effect so profound it was given a name: the Ferguson Effect.

At the same time, Sessions reinvigorated the prosecution of violent crimes. In 2016, the Department brought more cases against violent criminals than ever before. It also set a record for charging the largest number of criminals with federal firearms offenses.

And there’s more. Under Sessions’ leadership, the department finally went to work to protect the First Amendment rights of college students from restrictive speech codes. It filed statements of interest in four different lawsuits, including against the University of Michigan and the University of California at Berkeley. Michigan changed its speech code after the Justice Department came into the case. The department also reopened an investigation against Harvard College for discriminating against Asian American students in its admissions policies; the Obama administration had ignored the students’ complaints.

Sessions got the Justice Department involved in protecting religious freedom, too. In 2017, he issued a memorandum on “religious liberty protections in federal law” and directed all federal agencies and departments to abide by those protections. That included having the department file a brief in support of the baker persecuted by the state over his religious beliefs in Masterpiece Cakeshop v. Colorado Civil Rights Commission. Sessions also withdrew the unlawful guidance issued by Eric Holder in 2014 that claimed erroneously that the definition of gender in the Civil Rights Act of 1964 included transgender individuals.

In summary, Jeff Sessions: reversed many of the worst policies of the prior administration; pulled the Justice Department back into enforcing the laws as passed by Congress instead of rewriting them to match the politically correct views of the White House, and reoriented the department’s lawyers to administering justice in a fair, impartial, and objective manner.

There is no question that the president was unhappy with Sessions for his recusal from the Russian election collusion investigation, which the president thinks has gone on far too long and turned into a fishing expedition against him. But that should not detract from Jeff Sessions’ overall record, which illustrated what former attorney general Ed Meese says about him, that Sessions is “a passionate and forceful advocate for upholding the rule of law.” The next attorney general could do nothing better than to continue all of these policies.

Hans A. von Spakovsky is a senior legal fellow at The Heritage Foundation. Along with John Fund, he is the coauthor of “Who’s Counting? How Fraudsters and Bureaucrats Put Your Vote at Risk” and “Obama’s Enforcer: Eric Holder’s Justice Department.”