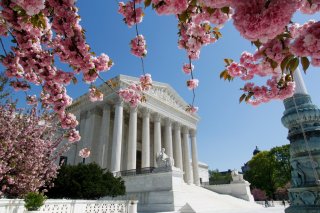 On Tuesday night, President Donald Trump wrapped up the most transparent Supreme Court selection process in history. He had identified the type of judge then he wanted and committed to a list of twenty-one candidates early on, so no one was shocked by his pick for the high court.

And what a pick it is! Neil Gorsuch is a first-class jurist. His academic credentials—Columbia, Harvard, Oxford—are impeccable. His impressive work experience includes a stint as the third-highest-ranking official at the U.S. Department of Justice and a decade of service on the bench of the Denver-based Tenth Circuit Court of Appeals.

Yet Gorsuch possesses a quality even more essential for a Supreme Court nominee: a demonstrated fidelity to the Constitution.

Gorsuch understands that, as a judge, he has a relatively modest role to play in our government and society. He believes that the judiciary is no substitute for the political process, and will reject efforts to impose a political agenda on the American people through the courts. In fact, he has criticized liberals for doing that very thing.

In a 2006 piece for National Review, Gorsuch wrote that “American liberals have become addicted to the courtroom, relying on judges and lawyers rather than elected leaders and the ballot box, as the primary means of effecting their social agenda on everything from gay marriage to assisted suicide to the use of vouchers for private-school education.”

For Gorsuch, that approach is unacceptable. Instead, he insists that judges must interpret the Constitution and statutes based on their text, structure and history. It is the same approach to jurisprudence taken by the late, great Justice Antonin Scalia—the man he would succeed on the nation’s highest court.

In brief remarks on January 31, Gorsuch paid tribute to Scalia. He called him a “lion of the law” and noted that he missed Scalia’s wisdom and humor.

Like Scalia, Gorsuch wields a powerful intellect and a witty pen. Consider his memorable dissenting opinion in a qualified immunity case where a middle-school student had been arrested and strip-searched for “causing a disturbance in class.” (He was burping.) The majority opinion stretched the law to grant qualified immunity to school officials.

Gorsuch disagreed, writing (and quoting Charles Dickens’ Oliver Twist): “Often enough the law can be ‘a ass—a idiot’” and noting that “there is little we judges can do about it, for it is (or should be) emphatically our job to apply, not rewrite, the law enacted by the people’s representatives.” He went on to explain why, in that instance, he did not believe the law was such an “idiot.”

While one can identify many similarities between Gorsuch and Scalia, there is at least one area in which the two men disagreed. And it’s a disagreement where Gorsuch could make a big (and welcomed) change in the law: by throwing out Chevron deference.

Under the Supreme Court’s ruling in Chevron U.S.A., Inc. v. Natural Resources Defence Council, Inc. (1984), courts will defer to administrative agencies’ interpretations of the laws they are charged with carrying out. Rather than interpret the law themselves, judges will accept any “reasonable” interpretation. Given that, today, administrative agencies touch every facet of the lives of Americans, from toothpaste to taxes, judges should more closely scrutinize administrative agencies when their actions land them in court. Otherwise, agencies can make the law, enforce the law and adjudicate the law, which is precisely the accumulation of power that James Madison called “the very definition of tyranny.”

Gorsuch has boldly criticized Chevron deference. In a case last year, he wrote, “What would happen in a world without Chevron? If this goliath of modern administration law were to fall? Surely Congress could and would continue to pass statutes for executive agencies to enforce. And just as surely agencies could and would continue to offer guidance on how they intend to enforce those statutes.” He continued, “The only difference would be that courts would then fulfill their duty to exercise their independent judgment about what the law is. … We managed to live with the administrative state before Chevron. We could do it again.”

If confirmed to the Supreme Court, Judge Gorsuch will be an advocate for limited constitutional government and the separation of powers among the branches of government. As President Trump said in his January 31 announcement at the White House, Gorsuch is “a man our country needs badly.”

In a time when administrative agencies and an all-too-powerful federal government regularly run afoul of the Constitution, Neil Gorsuch is the right man for the job.

Tiffany Bates is a research associate and Elizabeth Slattery a legal fellow in The Heritage Foundation’s Edwin Meese III Center for Legal and Judicial Studies.