The Lessons of the Nazis’ Wannsee Conference Should Still Haunt Us 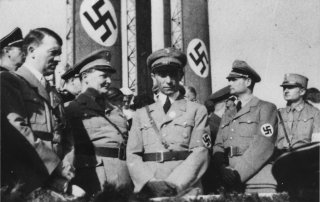 Eighty years ago, on January 20, 1942, fifteen men assembled in an idyllic lakeside estate near Berlin. The men were highly educated—seven held advanced degrees, including in philosophy, law, and medicine. They were also all Nazis. They had assembled at the villa to come up with a solution to the “Jewish Question.” The lessons from that day should—must—still haunt us.

The Wannsee Conference, as it would later be known, is infamous. Books, essays, plays, and a 2001 HBO film starring Shakespearean actor Kenneth Branagh have depicted a meeting in which educated men plotted industrialized mass murder.

The Nazis had been targeting Jews since even before they came to power in 1933. Indeed, anti-Semitism was at the very core of the Nazi movement’s ideology. As the historian Thomas Childers has observed, “Nazi racism, especially rabid antisemitism, was always on the surface.” But before they could engage in the wholesale slaughter of a people, the Nazis had to dehumanize them.

First, the Nazis boycotted Jewish-owned shops. The Sturmabteilung, or SA, a paramilitary organization associated with the Nazi Party, helped enforce the boycott—often violently. Jews were prohibited from serving in the military and from entering professional fields, such as law or medicine. In 1935, at Adolf Hitler’s prodding, the Nuremberg Laws denied Jews basic civil rights and prohibited intermarriage and sexual relations between Jews and “Aryans.” As Martin Luther King, Jr. later observed, “We should never forget that everything Adolph Hitler did in Germany was ‘legal.’”

From there, it didn’t take long for the Nazis to initiate coordinated state-sponsored violence against the Jewish people. On November 9-10, 1938, the Nazis commenced Kristallnacht (the Night of the Broken Glass), in which ninety-one Jews were murdered, Jewish-owned property was seized and synagogues destroyed, and 30,000 people were sent to concentration camps.

But the Nazis’ genocidal hatred towards others had only begun. Thanks to Western appeasement and indifference, Hitler’s Nazi Party further unleashed its rage while taking apart Europe piece by piece. In October 1939, one month after the Nazi invasion of Poland, Hitler authorized the mass murder of the mentally and physically disabled—those deemed “unworthy of life.” The so-called “T4” program serve as the blueprint for what would follow.

In June 1941, after the Nazi invasion of the Soviet Union, the extermination of the Jewish people became official state policy: Einsatzgruppen death squads murdered more than a million Jews by the end of that year. Reports of the massacres reached the West. In an August 24, 1941, radio address, British prime minister Winston Churchill said that Jews in “whole districts are being exterminated,” warning that “we are in the presence of a crime without a name.” But while the genocide had begun, it had yet to fully take its ghastly shape.

As the historian Andrew Roberts observed, “improvisation rather than any solid blueprint, was the general rule” to addressing the Jewish question until “a day-long conference held in a villa on the banks of Berlin’s Lake Wannsee” on January 20, 1942. The meeting’s purpose, Roberts noted, “was to place the thirty-seven-year-old Reinhard Heydrich, chief of the Security Police or SD, at the center of the process, while also establishing undeniable collective responsibility.” Although innocuously labeled the “Conference of State Secretaries,” this bureaucratic meeting industrialized mass murder. Historian Mark Roseman called the Wannsee Protocol the “most emblematic and programmatic statement of the Nazi way of doing genocide.”

At the meeting, the attendees spoke with astonishing frankness about their plans. As one attendee, Adolf Eichmann, later wrote in his 1961 memoir, “one spoke openly, without euphemisms.” Eichmann also added, “everybody willingly indicated agreement” with the conference’s purpose. Further, “there was something else, entirely unexpected, when they outdid and outbid each other, as regards the demand for a final solution to the Jewish question.”

Every last Jew living in Europe was to be murdered, even if at first the stronger ones were put to forced labor. “Approximately 11 million Jews will be involved in the Final Solution of the European Jewish question,” the circulated minutes read. Jews living in neutral nations like Ireland were also added to Heydrich’s list, underscoring the Nazis’ total commitment to their goal. Other questions, such as who qualified as a Jew were debated in formal and technical language, were also discussed.

Afterwards, the men indulged in brandy and fine cigars.

“Genocide,” Roberts wrote in his 2011 history of World War II, “was industrialized rapidly after Wannsee.” Indeed, in mid-March 1942 some 75 to 80 percent of all victims of the Holocaust were still alive, while 20 to 25 percent had perished. Yet, a mere eleven months later, the percentages were exactly the reverse. Wannsee, Roseman wrote, was “a signpost indicating that genocide had become official policy.”

The Holocaust would eventually claim more than 6 million Jews—the majority of them after the conference. The conference’s participants, highly educated and cultured men, were instrumental in the genocide. As Roberts observed: “The Holocaust could not have been carried out without the willing cooperation of scientists, statisticians, demographers and social scientists” who were “operating in a moral vacuum.”

Wannsee should teach us that monsters can take many forms, and monstrous ideas can be held by even the most privileged and the most educated. Amid rising antisemitism, the world must remember this lesson—it can’t afford to do otherwise.

Jared Sorhaindo is a New York-based writer and researcher on the Holocaust.