The Lessons of World War I Still Haunt Russia Today 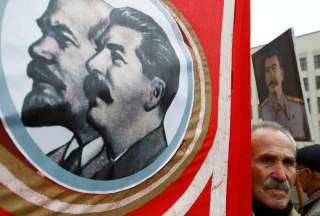 On November 11, the world will acknowledge the 100th anniversary of the armistice that ended the carnage that was the First World War. That date, however, doesn’t resonate in Russia. A far more significant moment on the calendar that just passed—the anniversary of the Bolshevik seizure of power—was similarly marginalized last year when the centennial of the October Revolution was largely ignored by the Russian government and Russian society as a whole. Current Russia sees little to celebrate or reminisce about the events of a century ago. After all, by the time the guns fell silent on the Western front, a Russia gripped in the frenzy of the revolution had already been knocked out of the war, losing more than one-third of the territory of the former Russian Empire in the process. What was left of the country was plunged into a bloody, destructive civil war that would not end for three more years. What followed was a series of famines, purges and the immense human costs wrought by rapid industrialization and the Second World War.

This does not mean that the current Russian political and strategic establishment ignores the lessons of World War I and the Revolution—but it sees in those events a cautionary tale of what the Russian leadership at the beginning of this century must do to avoid repeating those disasters. The Kremlin today is well aware of the dangers of ignoring how and why Russia so catastrophically failed the last time. In 2018, as in 1918, the leadership remains concerns with the possibility of Russian state collapse brought about either by internal factors or through the machinations of external enemies.

Russia had entered World War I still recovering from the damage done by the Russo-Japanese war and the subsequent “Revolution of 1905” that the economic and military reforms which had begun in 1906 were designed to ameliorate. Nevertheless, Russia’s industrial base and infrastructure were insufficient to bear the weight of a sustained global conflict. Prior to his assassination in 1911, Prime Minister Pyotr Stolypin repeatedly urged a policy of restraint—to give Russia the time it needed to implement reforms so that, at some point in the future, “Russia could speak as in the past”—from a position of strength. A number of key figures—from the former Prime Minister Sergei Witte to the faith healer Rasputin, confidant of the imperial family—urged Emperor Nicholas II not to go to war and that the conflict would bring disaster down upon Russia. Their fears were validated. Ironically, Nicholas himself had acknowledged, in 1911, that Russia was unprepared for war and needed a sustained period of peace in order to get its affairs in order—but felt he had no choice but to meet the challenge posed by the Central Powers to Russia's Balkan ally Serbia.

History has vindicated the Witte/Rasputin position that war would strain the Russian state to its breaking point. It is those lessons which today guide the strategic rationale of the Kremlin.

First is the need, as Nicholas himself had raised in a conversation with officials, that “everything that might lead to war must be avoided” in order, as was the case a century ago, to give time for the completion of military reforms and the construction of new infrastructure. For the Kremlin today, an additional challenge is managing the inevitable succession crisis that will come when Vladimir Putin retires or becomes incapacitated.

Second is the emphasis on using coercive measures that fall well below the threshold of war. Major conflict must be avoided, but Russia will continue to pursue its interests by modulating the tools it uses to prevent triggering a major conflict. While much has been written and debated about the concept of “escalate to de-escalate” when it comes to Russian nuclear strategy, this catch-phrase also captures the overall mindset derived from the lessons of the past: that in 1914, Russia escalated but could not de-escalate to prevent war.

Related to that point is the third key lesson: no blank checks for allies and partners. Russia's binding alliance with Serbia, but even more importantly, its entente with France, constrained its freedom of maneuver. In contrast, as we have seen in the Russian efforts in the Middle East, Moscow will back its clients but impose very clear limits on the extent of Russian support.

Finally, there has been clear messaging by the Kremlin to Russian civil society on the centennial of the Revolution and the end of World War I: as much as people may be dissatisfied with the course of political and economic life in contemporary Russia, there is always a worse path one can be on. The Russian people had legitimate complaints with the old regime a century ago, and look where that revolutionary fervor led the country—on a path to disaster.

A view expressed to me that I think sums up the attitudes of the Russian leadership is this: the Russian civil war is finally over—and the Whites have won. In other words, the team today feels that after a century marked by wars and catastrophes, pursuing utopian and unattainable revolutionary dreams, Russia is back on the right path—the path Stolypin charted when he declared, “You want great upheavals; we want a great Russia.”

Nikolas K. Gvosdev is a contributing editor of the National Interest.