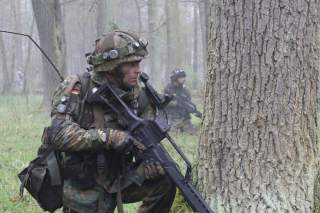 America routinely conducts military operations in no fewer than seven countries around the world. These interventions are what military theorists might call “low-intensity conflicts.” They are primarily aimed at tamping down the probabilities that radical groups will successfully attack the U.S. homeland. The budget for these interventions reached a peak of $187 billion, in 2008, and the White House has requested $50.9 billion for 2016.

The New York Times once estimated the physical, economic and human costs incurred in the September 11, 2001 attacks to be approximately $178 billion. And statisticians have estimated that there was, at most, only a 35 percent chance of 9/11 happening in the last forty years, which comes out to an annual chance of about 1.1 percent. America is currently spending 28 percent of the cost of a hypothetical catastrophe to prevent it ($50.9 billion for overseas contingency operations in 2016, divided by the $178 billion cost of a similar attack). Since that catastrophe only has a 1.1 percent chance of occurring, it seems America is overspending. Here is a calculator that allows you to play with the numbers for yourself.

America’s forces, which are optimized for large, expensive and conventional conflicts, simply cannot conduct small wars in a cost-effective manner.

And then there is the question of whether America’s overseas interventions are as effective as the alternative options. Would it not be better for America’s more local allies to handle these problems with the greater dexterity and cultural understanding that proximity affords? This could result in fewer American deaths, fewer American dollars wasted and better security outcomes. But how could America induce its allies to carry the burden of combating radical groups?

It could engineer a system of alliances that benefits both the weaker and stronger parties. Winning a small war requires cultural intelligence, singular focus and an ability to credibly maintain a permanent presence. America has not proven particularly capable in any of these areas. Its allies might. On the other hand, winning a large, conventional war requires economies of scale, technological superiority and control of the commons. America is uniquely positioned to dominate all three. U.S. allies are not.

Specialization in an alliance system is absolutely essential when the partners are of unequal strength. America does not provide all goods and services at no cost in a trading relationship. And it should not accept the same in its defense relationships.

The United States already manages its alliances in this manner to some extent. In Asia, shallow waters and short distances make diesel-powered submarines very effective weapons for a localized conflict. But America is far from Asia, and transiting U.S. diesel submarines from the West Coast to the western Pacific would be difficult. Instead, America specializes in nuclear submarines that are best suited to a war in the open waters of the Pacific, while it encourages its allies to build diesel submarines that will win a smaller war. Specialization makes all parties more secure.

But other alliances are not managed as productively. America and Europe might be best served if America focused on defeating a major aggressor (i.e., Russia), while Europe specialized in counterterrorism and counterinsurgency efforts. America, with its stronger economy and more concentrated defense-industrial base, will always be more capable in conventional conflict. European duplication of this capability is not efficient. Europe, with its proximity to the major sources of global instability, can more credibly maintain forces in these regions for the long term. And many European militaries already pride themselves on their peacekeeping abilities.

If America and Europe had arranged this division of responsibilities twenty years ago, America likely would not have invaded Iraq. An American military that only trains to conventional war might not have tried to nation build. And since European governments did not support the invasion, they would not have enabled it by committing their own counterinsurgency forces. The specialized alliance system would have been a check on ill-advised adventurism.

Europe would benefit from this arrangement in two primary ways. It would enjoy increased influence on the security policies of the sole global superpower. And it could avoid having to fund its own expensive, conventional capabilities that are ultimately inferior to America’s. The United States would benefit from this arrangement by shedding its expensive, small interventions and the force structure that supports them.

And America would enjoy greater dominance, since today’s allies would face more difficulty in becoming tomorrow’s conventionally capable adversaries. It was not long ago that China was an ally and Japan was a rival, after all. By creating force structures that only make sense through the framework of an alliance, that alliance becomes more permanent. And new adversaries should arise with less frequency.

To begin shifting America’s alliance structure in Europe to one of specialization, America must begin by assuring its partners that the United States is willing and able to deter Russian aggression. This could look like a larger and more permanent version of President Obama’s European Reassurance Initiative. And this defense must be contingent on Europe significantly increasing its efforts to stabilize Libya, Syria and the rest of the Middle East. European peacekeepers should enforce a safe zone for Syrian refugees and conduct diplomatic efforts to form a transition government. It is Europe that faces the greatest threat from Syrian instability, and it should pay the greatest price to mitigate it.

America has neither the energy nor the ability to stem the flow of instability from the Middle East. Europe might have both. But it has neither the ability nor the will to control the global commons and deter major-power war. America does. By allowing either side of the alliance to focus on its own strengths, both could enjoy greater security and prosperity.

Twentieth-century alliances worked well in their time. But the twenty-first century now demands an update.

Sean Lavelle is a U.S. Naval Officer, a graduate of the Naval Academy and of Johns Hopkins University. The views and opinions expressed in this article are his and do not necessarily reflect the official policy or position of any agency of the U.S. government.