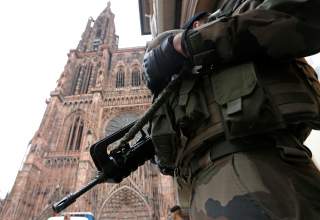 In February 2015, London schoolgirl Shamima Begum headed to Syria to live in the Islamic State’s Caliphate. Now nineteen years old, she recently turned up in a Syrian refugee camp, demanding to be returned to the UK.

Begum claims she “never did anything dangerous” during her stint with the Caliphate, but subsequent news accounts suggest her activities in Syria were not those of a mere housewife.

The Daily Mail reports that she stitched suicide bombers into explosive vests. The Telegraph cites sources who claim she also worked as a gun-toting “enforcer” of ISIS laws for women.

When Begum announced her desire to come home, even her own father did not believe she should be allowed back. Yet when UK Home Secretary Sajid Javid announced he would keep her out of the UK by revoking her citizenship, he encountered fierce criticism.

“Ban on Isis bride could aid extremists” headlined The Times of London. Revoking citizenship would allow Islamists to “exploit alienation and grievance,” said Sara Khan, head of the UK Commission on Countering Extremism.

That keeping Islamists at bay is somehow “giving the extremists what they want” is a perverse conceit, but it’s been around for years and seemingly gaining credence in some quarters.

After Anwar al-Awlaki was killed in a drone strike, a New York Times column argued that killing the man who had directed and inspired terrorist attacks was “counterproductive because it feeds into the martyr mythology.”

Similarly, when Osama bin Laden was taken out, a writer for The Guardian warned that “al-Qaida may emerge even more radical, and more closely united under the banner of an iconic martyr.”

This strange notion become especially pronounced as the war in Syria progressed. Dismantling the Islamic State’s caliphate would also be, in the minds of some, counterproductive.

When ISIS massacred 130 innocents in the November 2015 attacks in Paris, journalist Jürgen Todenhöfer insisted striking back would be a mistake. “Western bombs falling on Raqqa will fill them with joy” because “[m]ilitants in Syria dream of a big showdown with the U.S. and Europe,” he said.

The bizarre idea that you should not act against terrorists abroad has carried over to the homeland. Arie Kruglanski from the University of Maryland told NPR that “military and policing efforts” against domestic radicals will only “inflame the sense there’s discrimination.”

And the view is not restricted to fringe journalists and academics. In Britain, the House of Commons Select Committee on Justice recommended not imprisoning certain terrorism offenders on the off chance they became even more radical once in jail.

With policing and jail time off the table, alternatives for enhancing domestic security are rather limited. You might suggest, as did the Home Secretary, confiscating passports to keep terrorists and their supporters from traveling, or even revoking their citizenship if they try to return. But even that’s too harsh for some. Psychologist Preben Bertelsen, for example, fears that approach means “we’ll end up with nomadic young people having no other opportunity than criminality or violent destructiveness.”

To recap, then: killing terrorist leaders is counterproductive; asking our military to dismantle the caliphate that slaughtered tens of thousands is giving the terrorists what they want; jailing terrorists for wrongdoing is a mistake, and stopping terrorist recruits from entering our country is just plain wrong.

The only option left, it seems, is to just let the Islamists win.

It’s an approach that enjoys a lot of support among at least one group: the jihadists themselves.

As one foreign fighter explained to the UK’s Channel 4 News: “If you take away people’s passports . . . that will only cause more problems. If you treat them like criminals, they will only have more hatred in their hearts and then they might take revenge.” Another, when confronted with the notion of being prosecuted for returning from fighting in Syria, responded by saying “We’re forced to stay and fight, what choice do we have?”

Of course jihadists don’t want there to be any legal or societal consequences for their actions. However, it should be surprising that so many of the rest of us seem to agree with them.