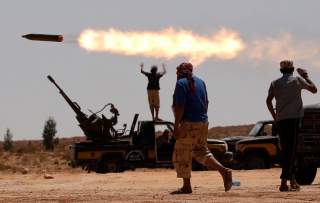 President Macron appears to be gradually positioning France as a global leader now that America’s President Donald Trump has lapsed into a proto-isolationist grand strategy. The latest example is Libya. With Macron’s help, Libya’s factional leaders have agreed to hold fresh presidential and parliamentary elections in December, which the United Nations Security Council just endorsed unanimously. However, conditions in Libya remain acutely fragile, with fighting continuing and no current peace agreement in place. With a serious risk of foreign meddling from western adversaries looming in the background, France and its allies risk a “mini Syria” if they do not act in concert to augment their Libyan stabilization efforts.

Libya is at a crucial crossroads. In some ways, it is closer to the stability that evaporated two years after western intervention overthrew Gaddafi, but in other ways less so as indicated by the recent large-scale bombing in Tripoli. It is incumbent on the allies working with Libya—the U.S., France, Italy, and the UAE— to rid the country of extremism. Furthermore, the allies must band together to persuade the various Libyan parties to agree to a new UN-backed power-sharing agreement. The North Atlantic Treaty Organization (NATO) and the European Union (EU) also need to move forward on the delayed deployments of civilian stability operations Libya has requested. Additionally, all concerned parties need to prevent Russia from intervening further to the detriment of Libya’s security.

The main sticking point in the negotiations over the UN Special Representative’s power-sharing proposal is whether the Defense Minister position should be held by a civilian or whether a general could hold it. There is widespread expectation that General Haftar, leader of the so-called Libya National Army (LNA), would take up the position after the agreement of a deal. Haftar has just returned from a stint in a French hospital, and he wasted no time in harshly criticizing the coming election. While the UN has made considerable progress in the past six months, different Libyan factions continue to engage each other militarily, imperiling the likelihood of an agreement that will be adhered to by all parties.

Prime Minister Fayez al-Sarraj leads the Government of National Accord (GNA), but at the moment Libya has been suffering through a triad of mid-level instability. First there is the presence of ISIS in Sirte, second an attempt by the LNA to take the country by force in the east, and third the political instability that features rival parliaments in Tripoli and Benghazi. For some time it appeared as if Haftar and the LNA were likely to be successful in their drive to overtake the whole of the country, but more recently the GNA and its allies have made modest gains, while several militias previously loyal to Haftar no longer are. In part because of this, there is a legitimate window of opportunity for a successful power-sharing agreement to be reached at the behest of the dogged UN Special Representative of the Secretary-General (SRSG) Ghassan Salame.

At a time when the Trump Administration appears to have taken its eye off the ball in Libya, Russia has ramped up its intervention in Libya. Moscow has undertaken a full-fledged backing of Haftar”s forces in an attempt even to replace the UN as the broker among the various parties. This Russian intervention has all staged from a Russian base in western Egypt where special forces and military advisors are deployed. Russian efforts have even recently moved more into the open, including a port of call from a Russian aircraft carrier that gave Haftar a ceremony and a secure phone call with the Russian Defense Minister. Yet there is still ample time for NATO and the EU to upgrade their efforts to aid the GNA, in particular now that Italy has committed troops to help stem refugee flows from Libya’s coastal areas.

NATO and the EU have been formally requested by Libya to mount civilian stabilization operations, and both have accepted and committed informally to coordinating their operations. However, in part because of Libyan instability and in part because of Europe’s keen focus on the Libyan refugee situation, neither the EU nor NATO has fully deployed their operations. European governments have been consumed with viewing Libya through the refugee prism, understandably in part due to the incipient challenge of integrating refugees in their societies and the acute domestic political fallout.

However, it is imperative for the EU and NATO to move forward. It is critical to get their deployments in ahead of any deeper Russian incursion, or a renewed threat from the LNA. Doing so will augment the UN’s sharpened lead approach, as well as help to prevent refugees from migrating en masse to Europe. The imperative for action has grown with the stalled UN attempt to broker greater stability and with the U.S. appearing to sit this simmering crisis out.

The best hope the UN has to achieve even a marginal degree of stability is for the EU and NATO operations to proceed. This is because such operations would have a timely impact in helping the UN create more sustained stability. In essence, the western powers should be playing a more prominent role in notoriously unstable Libya because at this moment there is a legitimate opportunity to turn the corner in a more stable direction. This is also important because although some observers have called for Egypt to play a prominent role alongside the western tandem, this is less advisable in light of how closely Egypt is now working with Russia.

Libyan leaders have spent the last several years sparring, politically and militarily, but lately, there has been sustained talk of a basis on which to come together and unify the disparate parts of Libya. For example, the large-scale Tripoli bombing aside, there has been measurable progress in registering Libyans for the next national election with over 2.5 million Libyans registered. Moreover, the U.N.-backed GNA government and the central bank in Tripoli have just agreed on public spending of 42 billion Libyan dinars ($31 billion) for 2018, an increase from 37 billion last year.

For its part, the UN views this embryonic stability as a critical juncture and has re-launched an updated version of its efforts to broker stability among the competing factions in Libya. Thus far, the most important actors on the ground have positively received the initiative, although Haftar recently commented that the UN-backed government was now “void and expired.” In fact, technically speaking this is true, for the formal mandate has expired, thereby galvanizing the UN into active mode to get a new agreement in place for the GNA.

The most compelling question in this context is whether General Haftar of the east-based LNA will compromise with the UN and the West-backed GNA, and in particular whether he will accept a civilian defense role as opposed to a military one. Recently he has swung between being supportive of the diplomatic path being spearheaded by the UN SRSG and rejecting it. With the EU and NATO operations in place and joining the UN to form a kind of UN-led triumvirate, Haftar is more likely to compromise and consent to becoming a civilian defense minister.

Over the past several years the Libyans have repeatedly made formal requests of NATO and the EU to mount civilian stabilization operations in Libya, and both organizations now need to accede to these requests and set near-term dates taking action. For example, while the EU has approved both, they have been slow in proceeding toward full deployment. In addition, although technically the EU mission exists, it is not even headquartered inside Libya.

One of the most important reasons for the West to get its collective act together is to secure a solid western operational foothold ahead of any additional moves by Russia. The danger is that Russia has gradually been consolidating its position for months now. Also, Russia has been courting Haftar for the past year, by hosting him in Moscow and directly funding the LNA in addition to also supplying it with weapons and logistics assistance.

Western civilian operations in Libya also represent a compelling opportunity for the EU and NATO not only to coordinate their operations, but actually to go so far as to engage in joint planning and fully conjoined—as opposed to merely complementary—operations on the ground. These two pivotal overlapping western security organizations have recently been attempting to overcome their long-running tensions and jealousies. For example, staff to staff meetings in Brussels have been making marked progress in working together both in Brussels and in the field. In fact, a broad contingent of current and former EU and NATO officials believe Libya amounts to an important test case for deploying conjoined operations.

But by far the most crucial reason for western operations to be deployed forthwith in Libya is to shore up the tentative progress the UN is making for establishing a new unity government. According to conventional wisdom, Libya has been an unstable basket case ever since the NATO operation removed the Qaddafi regime during President Obama's first term in 2011. In reality, there were over two years of relative stability. However, gradually an eventually acute problem metastasized with no actor ever figuring out how to deal with the strong presence of well-armed militias in Libya. Over time, those militias gradually achieved superiority over the politicians in Tripoli.