Libya Needs Its Old Constitution If It Wants to Survive 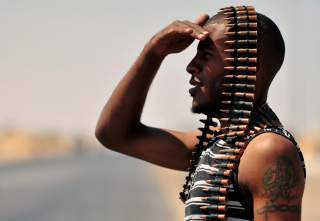 Alarmed by Libya's continued instability and fed up with its fractiousness, Western powers are pressing the country to hold new elections. Last month, French President Francois Macron brought four Libyan leaders together to Paris, and with the backing of the United Nations, the European Union, and twenty observing countries, got them to accept an eight-point declaration. That declaration plans a target date of December 10, 2018, as the date for the national poll.

Unfortunately, even if these four figures spoke for all Libyans—and clearly they do not—and even if the daunting security risks could be surmounted, Libya faces another over-arching impediment to elections. The fact remains that there are no ground rules either for the election or the aftermath when elected officials attempt to take office and govern. Without an agreed and viable constitutional mechanism, holding elections in Libya could reignite conflict and potentially seal the country’s division. Instead of trying to cobble together an agreement on a new draft, the way forward is to go back to Libya’s original, successful constitution, first drafted in 1951.

The impulse to hold elections in Libya is understandable. The country is beset with three rival governments, two parliaments, one loosely-organized army, and a multitude of militias. A massive legitimacy deficit hangs over these institutions and the officials who lead them. Furthermore, Libyan national institutions are essentially defunct, and functioning civil institutions exist mainly at the municipal and local levels.

Underneath the institutional paralysis lies a mass of divisions—between Tripoli and the East, between areas that have oil and gas and those that don’t, between more Islamist-leaning and more secular-leaning tendencies, and between tribes and between personalities. And much of the country is insecure, parts are in outright conflict, and extremists including ISIS are present. With a deadly suicide attack last month on Libya’s election commission, ISIS made clear its intention to sabotage elections. Furthermore, other key embassies and delegations from the United States and the European Union have decamped from Tripoli to neighboring Tunisia.

Meanwhile, fighting rages in the nearby Eastern city of Derna between forces loyal to General Khalifa Haftar, commander of the loosely-organized Libyan National Army, and various Islamist groups including several Salafist extremists. Taking advantage of the LNA’s preoccupation in Derna, a militia commander launched an attack on two of Libya’s main exporting terminals, inflicting damage that, with lost exports, will run into the tens of billions of dollars and take years to repair.

The relatively quiet urban core of Benghazi—Libya’s second city that was the notorious site of the fatal attack on the American diplomatic compound in 2012—is a heap of destruction.

Haftar, one of the four figures invited to Paris, stands in opposition to the UN-recognized government in Tripoli. Haftar derives political legitimacy through the support of the elected parliament in the East, and military effectiveness in part through the support of Egypt and the United Arab Emirates, both of which have participated in the aerial bombing of targets in Derna and other locations.

In short, the very reasons that make it imperative to hold an election in Libya are the same as those that make it challenging, foolhardy even, to go forward unprepared. These are violence and insecurity, bitter regional and personal divisions, the collapse of governance, the presence of extremists and the involvement of outsiders, and the tussle over resources. Indeed, it was the absence of agreed ground rules that helped turn the elections of 2014 into the spark for the country’s civil war.

A constitutional Assembly elected earlier that year in a paltry turnout was to have submitted a draft for a national referendum before elections were held. But no draft or referendum was forthcoming. Despite this, the international community pushed for elections in June 2014 even though disillusioned and frightened voters stayed home. Candidates from Islamist-leaning factions that lost power challenged the results and the Supreme Court, acting without an accepted constitutional mandate, invalidated the election.

In response, the newly-elected, more secular-leaning Parliamentarians fled Tripoli and set up their assembly in the East of the country, reviving the historic cleavage between the Eastern region of Cyrenaica, and Gaddafi’s chosen power center of Tripolitania. Tensions between Tripoli and the East mounted as several hundred prominent leaders, political activists, members of the security forces and others in the Eastern cities of Benghazi and Derna were assassinated by Islamic extremists prompting General Haftar to launch his military campaign, dubbed ‘Operation Dignity.’

Given this bitter history, it is critical this time to get a broad-based agreement on the constitutional basis for elections, as well as the rules for governance after elected officials take office. Without a framework for power-sharing and power-wielding, spoilers will remain outside the process, setting the stage for more chaos and instability in the run-up or aftermath of the poll in December.

The current, disputed draft constitution, meant to be adopted by September under the Paris plan, requires a constitutional referendum by two-thirds of voters. Aside from imposing additional security and logistical burdens, the referendum is unlikely to generate much public support given the minimal consultation conducted by the woefully unrepresentative Drafting Assembly. Moreover, even if the draft could survive a poll, parliament would then have to pass a new electoral law.

The situation is optimal for current leaders—satisfied with the status quo and wishing to remain in office—to string out their disputes. Corruption and thefts by benefactors of the status quo are swallowing Libyan Central Bank reserves and putting the otherwise wealthy country on the verge of bankruptcy. Efforts by the head of the UN mission in Libya, Ghassan Salame, to break the political impasse so far have failed.

History offers a better solution. Modern Libya’s first constitution, originally drafted in 1951 and amended in 1963, was the product of a successful, evolutionary process in which Libya’s three traditional regions voluntarily ceded power to form a highly Federalized state under a monarch. The 1951 constitution’s preamble captures the consensual nature of the endeavor: “We the Representatives of the people of Libya from Cyrenaica, Tripolitania and Fezzan … agree to form a union….” Libya’s first elections, with British police on-hand to assist with security, were held successfully the next year.

The constitution served Libya well until the 1969 coup led by then-Colonel Gaddafi which revoked the letter and cooperative spirit of the document. In place of the balanced, regional construct, Gaddafi introduced highly centralized rule from Tripoli, leaving a legacy of suspicion in Benghazi and the East about domination from the western part of the country. The events since 2014 have only accentuated these anxieties.

A strong legal argument can be made that, in the wake of the 2011 revolution, it is the 1963 constitution that Gaddafi inactivated that is still in force. The primary technical challenge to restoring the constitution is supplanting the role of the king with a modern, interim variant. Pre-Gaddafi Libyan law provides for a ready solution—a "Sovereign Council" designed to replace the king under emergency conditions. Using this device, Libya's 1951/1963 constitution could set the basis for the election of a new Sovereign Council to perform the duties of the King.

The Council would inherit the powers to decide who among elected parliamentarians should form a government, when parliament should be dissolved, and would make key appointments in the security and financial sectors. The interim Sovereign Council would, temporarily, supplant the need for a President, thereby removing the most contentious power squabble from the landscape. In time, as stability returns and interim institutions mature, a new constitution could be drafted and put to public referendum, followed by elections for a new parliament and President or—if Libyans so chose—a king.

Of course, it is up to Libyans—not outsiders—to decide on whether and how to revive their historical constitution. Given the specter of illegitimacy that hangs over most Libyan institutions (including the Constitution Drafting Assembly), the UN could turn to the officials who actually provide the bulk of services to their citizens—the country's mayors. These leaders, along with heads of tribes, could meet in a National Convention and agree to revive the dormant-but-legitimate constitution.

Unlike the alien and opaque process that produced the current draft constitution, returning to Libya's democratic-monarchical roots would be an authentic step that rekindles a sense of ownership in the political process. By reviving the original constitution, the National Convention would be reminding Libyans of their obligation to change governments by a constitution, and not by coups d'états. It would also serve as a reminder of the country's capacity to overcome differences and forge functioning and unifying institutions according to law.

Libya and its international backers face an array of formidable challenges in organizing elections this year. The best way, perhaps the only way, to overcome them is to re-engage Libyans in the process of setting the rules for the poll. Given the bleak alternatives available, reaching back to Libya’s successful origins would provide the best chance for the country to elect its way out of the current crisis.