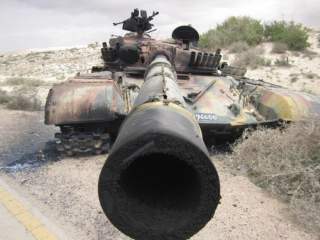 Earlier this month, two prominent Islamist militia leaders, Salim Derby and Nasir Atiyah al-Akar, were killed in clashes against ISIS in Derna, Libya. One could chalk up their deaths to infighting among Islamist groups in the midst of a civil war, but the reality is far more unsettling. General Khalifa Hifter and the allies of Libya’s eastern House of Representatives (HoR) government—the one that claims to be pro-Western and internationally recognized—are deliberately allowing ISIS the necessary space and time to strengthen itself in Libya and become a real threat to Western interests. In doing so, Hifter creates a situation so dire that the United States and European countries have no choice but to recognize him and the HoR over their political opponents and thus solidify their power in Libya.

Since May of last year, the secular House of Representatives and the Islamist-dominated General National Congress (GNC) have been competing for control of Libya. As both entities were lacking in legitimacy, they relied on allied militias and brigades to fight on their behalf, and the political feud turned into violent conflict. In support of the GNC, militias from Misrata drove the HoR out of Tripoli into the eastern city of Tobruk and launched Libya Dawn, a coalition of revolutionary and Islamist militias against the HoR and its allies. On behalf of HoR, General Khalifa Hifter, a well-established military figure who fought both for and against the late Libyan leader Muammar al-Qaddafi in the course of his career, launched Operation Dignity, an alliance of militias against the GNC’s allies.

Hoping to circumvent round after round of UN-led negotiations with the GNC, Hifter and the HoR have asked the United States and the United Kingdom to lift the arms embargo and provide them with weapons and support to fight terrorism in Libya. With such a request, they conflate the revolutionary militias, the Islamist militias in Libya’s east, and the Islamic State as a single entity. Should the Western powers offer such support, it will mean recognition of Hifter and the HoR, and delegitimization of the GNC and Misrata. The United States and the United Kingdom have ignored these requests, despite the Tobruk government sending representatives and delegates to plead their case.

Though Hifter presents himself as the only entity to whom the West can turn if it does not want the ISIS on its doorstep, this is hardly the case. Misrata militias have been doing the bulk of the fighting against ISIS in Sirte and central Libya, and Islamist militias have done the majority of it in the east. While Hifter has been fighting ISIS in parts of Benghazi, he has mainly targeted the Islamist militias that have fought against its spread. The general fought against the Benghazi-based Ansar al-Sharia Libya (ASL) and its allies who, under the leadership of Mohammed Zahawi, refused to pledge allegiance to ISIS. To be fair to Hifter, ASL and its allies had taken control of Benghazi last October, and his efforts to remove them were welcomed by the majority of the city’s residents, but he certainly has not mounted a serious effort against ISIS.

Hifter also includes among his enemies the Abu Salim Martyrs Brigade and the al-Noor Brigade—led by Salim Derby and Nasir Atiyah al-Akar respectively—prominent Islamist militias that have fought against ISIS since it entered Derna last November. To be clear, these Islamists did not resist ISIS’s invitations and fight them out of a sense of morality or scruples, but rather a desire not to share their patronage networks with a new foreign actor.

Not only did Hifter allow his rivals to carry the mantle of fighting ISIS, he also did his part to undermine the negotiations and extend the war. When the HoR and GNC have come to the table to negotiate, Hifter has responded by conducting airstrikes and even announcing a ground offensive on Tripoli, enraging his rivals. Hifter is certainly not the only actor obstructing the negotiations in Libya, but his opposition is even more confounding given that the UN-led talks seem to heavily favor his side. He has avoided negotiations because by engaging in them he would have to recognize the GNC and Misrata as legitimate entities, even though his side would dominate the political scene. He and his supporters are not satisfied to merely control; they want to totally delegitimize their opponents. To that end, Hifter has prolonged the fighting, thus allowing ISIS to become stronger, attract more members, and take more ground.

When Ansar al-Sharia Libya announced in January 2015 that its leader Mohammed al-Zahawi had been killed by ISIS fighters, the organization was significantly weakened. Some of its leadership joined ISIS in April 2015, and while remnants of the organization have refrained from joining its ranks, ISIS is now operating in parts of Benghazi where ASL was previously the dominant force. Initially only controlling parts of the eastern city of Derna and its outskirts, it has since expanded its presence not only to Benghazi but also to central and western Libya. Now that ISIS has killed Derby and al-Akar, the groups in Derna seem to have rallied against it. These groups have not fragmented the way Ansar-al Sharia has, but ISIS will likely maintain its presence in the nearby Green Mountains—an important staging ground for it to grow its base, continue training its ranks, and store weapons and hardware.

What then to do about ISIS in Libya? While the threat was overblown initially, and despite recent losses in Derna, the group is gaining strength and space. Though both Hifter and Misrata militias have complained that they need more money and weapons to fight the growing threat, the two are more than capable of tackling the group. The United States and the UK have done their part in not falling for Hifter’s gambit. They have maintained arms embargos and the stance that Libya’s future must be negotiated. But as negotiation after negotiation fails to produce a unity government, the time has come to apply more pressure on the HoR side. The UN has levied sanctions against key individuals obstructing the peace process, but they have yet to target Hifter himself. UN sanctions will be difficult to impose as Russia and China have already blocked such efforts, but if the West cannot emphasize to Hifter that he and the HoR must tolerate political opposition despite past grievances on both sides, two very dangerous developments will happen. First: Hifter’s self-fulfilling prophecy will come true—as the fighting continues and Libya’s Islamist groups weaken and fragment, ISIS will become stronger, and as such, Hifter will finally have his enemy to fight on behalf of the West. Second: if the West does provide Hifter with weapons and support to fight ISIS—effectively nullifying the negotiations and allowing the HoR to control Libya without compromising with its opponents in western Libya—this will lead to permanent disorder in the country. Misrata will not disappear or become enveloped into ISIS like some of the Islamist militias. It will remain a powerful force in Libya, and its conflict with the recognized government of Libya will persist.

Given the limited restraints and outside influence on him, Hifter will likely continue to obstruct the negotiations and benefit ISIS. The international community however, should have no disillusions about the “internationally recognized” government. The HoR and its allies may proclaim secularism and anti-Islamism, but they had their part in allowing and facilitating the growth of ISIS in Libya.